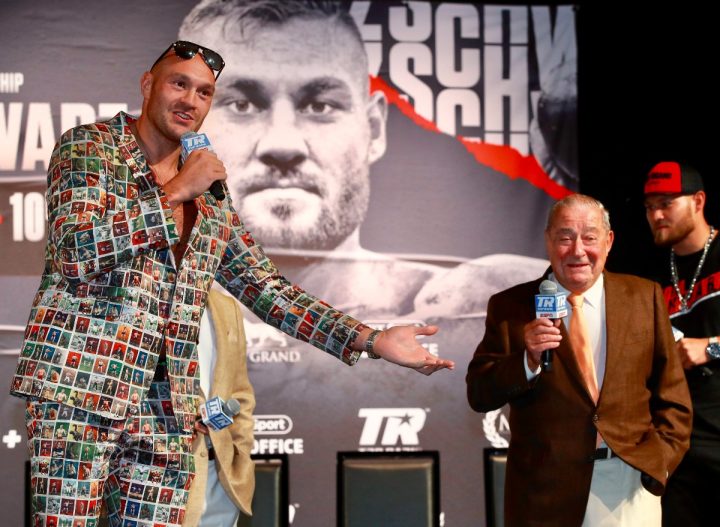 By Tim Royner: With fellow countryman Anthony Joshua having been beaten earlier this month in a big upset loss, lineal heavyweight champion Tyson Fury cannot afford to overlook his opponent Tom Schwarz for this Saturday night on ESPN+ Top Rank picked out Schwarz after pouring through the German fighter’s 24 fights.

After sitting through a lot of tape on Schwarz, Top Rank pulled the trigger and picked him as the opponent for former IBF/WBA/WBO heavyweight champion Fury (27-0-1, 19 KOs) to fight this Saturday night on ESPN+ at the MGM Grand Garden in Las Vegas. The fight card starts at 10:00 p.m. ET/7:00 p.m. PT.

Fury will have his lineal heavyweight title on the line for the fight. Unfortunately, that’s not a real title. It’s just a symbolic title that Fury likes to talk about. He beat 40-year-old Wladimir Klitschko at the end of his career in 2015.

Although Wladimir was still powerful, his reflexes were gone by this point in his career, and he could no longer pull the trigger on his shots. Fury didn’t beat a prime Wladimir. He beat a guy that was done for all intents and purposes.

Top Rank Boxing promoter Bob Arum is excited about the Fury vs. Schwarz fight. Arum likes the 6’5″ Schwarz, and thinks hes a good fighter. Although Schwarz is probably not even the seventh best heavyweight in his own country of Germany, Arum still likes him. There are of arguably far better heavyweights in Germany than Schwarz. The difference is they weren’t given a #2 ranking with the World Boxing Organization, and they weren’t picked out by Top Rank to fight Fury.

Schwarz doesn’t look sensational. He just looks big, slow, and not powerful. He’s also easy to hit. There’s nothing “tremendous” about Schwarz other than his size. He’s a big guy at 6’5″ 240 pounds. He’s got size, but not much power, speed or talent.

The problem with doing that is you get a fighter that is completely over-matched once they get in the ring with a more experienced guy like Fury.

The good news is Fury will likely look sensational on Saturday against Schwarz. What’s bad is many of fans that pay $4.99 per month to watch boxing on ESPN+ will be less than pleased at seeing a complete mismatch. The fans likely won’t be impressed with Fury and become fans of his after watching him beat up on a stiff with little in the way of talent. That’s why it would have been better for Top Rank to at least match Fury against a heavyweight with some ability that wouldn’t stink up the joint on Saturday night.

Fury’s slapping fighting style is hard on the eyes anyway. He’s not the most exciting fighter in the world to watch. Fury is like the complete opposite of WBC heavyweight champion Deontay Wilder.

Last December, Fury fought Wilder to a 12 round draw in Los Angeles, California. It was a pure defensive effort for Fury with him moving around the ring, trying to survive, but not throwing meaningful punches. The judges gave Fury rounds based on slaps, but it was Deontay that landed the MUCH harder shots in every round of the fight. Based on his lack of power on his punches, it was difficult to give Fury any rounds, because he was mostly scratching at the air with his shots, and trying to keep Wilder from attacking him.

It was the same thing we saw from Fury in the Klitschko fight. He was more focused on keeping Wilder from attacking him with his feints than he was in landing meaningful punches. If Fury is more popular now, it’s likely only by a small amount. He was boring against Wilder. Fury made the fight boring to watch in this writer’s opinion. The American boxing fans like to see action. Fury wasn’t active at all against Wilder. The fight was one of those affairs where you need a cup of coffee to stay awake.

It just looked like a big fighter with no power trying to survive for 12 rounds against a guy that was trying to take his head off. Wilder knocked Fury down twice in the championship rounds. Fury was actually knocked out in the 12th, but the referee didn’t waive it off. He gave a count to Fury while he was seemingly unconscious. With the referee’s being safety conscious nowadays, you don’t see a lot of them giving counts when a fighter looks as badly hurt a Fury did.

“I believe the fight with Wilder only helped my profile here in the United States, and here we are again, only a few days away from the biggest fight of my life,” said Fury.

Fury and Wilder will be fighting each other in early 2020, as long as they keep winning. Wilder (41-0-1, 40 KOs) will be defending his WBC title against Luis Ortiz in September in a rematch. Fury plans on fighting once more in 2019 after he deals with Schwarz. Top Rank hasn’t given an indication of who Fury will be fighting next, but it’s expected to be someone similar to Schwarz in terms of talent.

The co-feature bout on the card between light heavyweights Jesse Hart and Sullivan Barrera could easily steal the show on Saturday night. This is a far better match-up than the main event fight between Fury and Schwarz. Hart is moving up to the 175-pound division, and he’ll be fighting former world title challenger Barrera in a 10 round fight. This will be an exciting match from start to finish. Both guys have excellent punching power, and they bring it. Hart is in love with throwing uppercuts. That’s pretty much his bread and butter shot, which makes him easy to figure out. Barrera has very little hand speed, but he does hit hard. This is a 50-50 fight.