Luis Collazo vs. Jose Benavidez on August 17 on ESPN in Los Angeles, CA 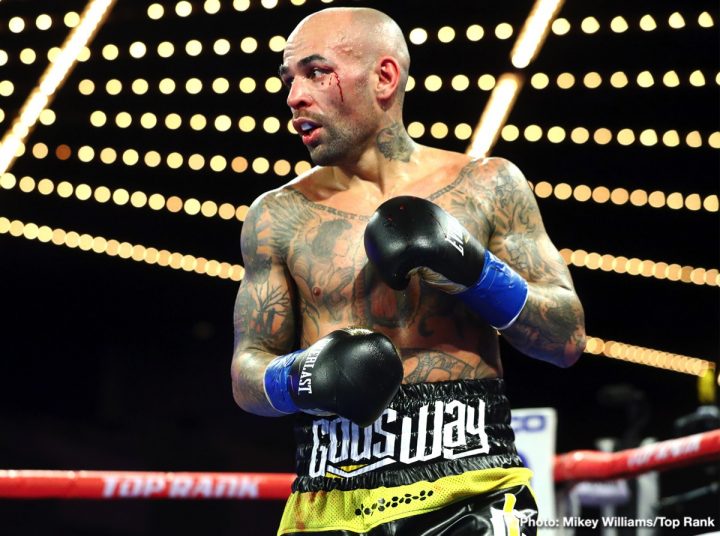 By Dan Ambrose: Former WBA welterweight champion Luis Collazo (39-7, 20 KOs) will be facing Jose Benavidez (27-1, 18 KOs) in the main event on Top Rank Boxing on ESPN on August 17 at the Banc of California Stadium in Los Angeles, California, according to Dan Rafael.

It’s somewhat of an odd choice to have the 38-year-old Collazo and the recently knocked out Jose Benavidez as a headline attraction on a card, as neither of them has done anything with their careers as of late. Benavidez suffered a 12th round knockout loss to World Boxing Organization welterweight champion Terence Crawford last October in Omaha, Nebraska.

Benavidez fought Crawford competitively. In the 12th, Crawford turned up the heat on Benavidez and took him out. At the time of the stoppage, Crawford was ahead by the scores 110-99, 107-102 and 108-101. Benavidez’s gimpy knee limited what he could do in the fight. It’s unclear how many fans Benavidez won with that performance.

Losing a fight is never a good thing, but Top Rank is still willing to put Benavidez in the main event. At best, Benavidez is now a recognizable name to a small portion of casual boxing fans. They might be mildly interested in seeing Benavidez fight Collazo, especially if they mistake him for his younger brother David Benavidez. He fights at super middleweight, and is clearly the more talented of the two brothers.

Collazo fighting once a year

Since his seventh round stoppage loss to Keith ‘One Time’ Thurman in 2015, Collazo has become a once a year fighter. He didn’t fight at all in 2016, and then came back to fight once in 2017 and 2018. Thus far, Collazo has fought once in 2019 in beating the capable Samuel Vargas (30-5-2, 14 KOs) by a narrow 10 round split decision last March in Uniondale, New York. Collazo has won his last three fights in beating Sammy Vasquez, Bryant Perrella and Vargas. He’s not fighting enough to get pushed up the ranking at 147. At the pace Collazo is fighting, he’ll be in his 50s, and still spinning his wheels. He needs to fight more often.

Collazo captured the World Boxing Association welterweight title with a 12 round split decision victory over Jose Antonio Rivera in April 2005. Collazo successfully defended the title once in stopping Miguel Angel Gonzalez before losing it to the popular A-side fighter Ricky Hatton by a 12 round unanimous decision in May 2006. Collazo clearly did enough to win that fight, but the judges gave it to the highly popular Hatton. Collazo was soundly beaten by Shawn Mosley by a 12 round unanimous decision in February 2007.

That was a bit of a surprise at the time, because Mosley was over-the-hill at the time. Collazo then lost a controversial 12 round unanimous decision to Andre Berto in 2009. That was a fight that many boxing fans had Collazo winning. Once again, Collazo found himself on the receiving end of a questionable decision against a popular fighter. Collazo has seven losses on his resume, but he really only has five true losses. He was later beaten by Amir Khan and Thurman. Those weren’t controversial defeats.

Benavidez might be the younger fighter at 27, but he’s got a bad knee, and he’s not much of a puncher. Collazo has done far more with his career than Benavidez, and he’s got the better punching power. If Collazo can take the fight to Benavidez the way that Crawford did in the 12th, he should be able to knock him out. Benavidez is all arms and legs, and can’t punch at all. Collazo is ranked #10 with the WBO, so this is an important fight for him. If he can beat Benavidez, he’ll get pushed up the rankings. Eventually, Collazo will get a title shot against Crawford.