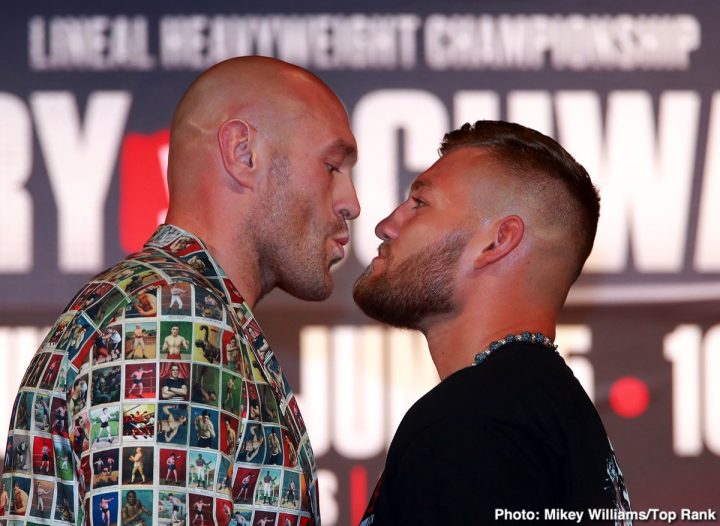 By Scott Gilfoid: Tyson Fury will be under the microscope on Saturday night in facing the huge 12 to 1 underdog Tom Schwarz on ESPN+ at the MGM Grand Garden in Las Vegas, Nevada. Fury (27-0-1, 19 KOs) has been telling everyone that he’s the best heavyweight on the planet, and that’s putting a lot of pressure on himself to perform. You can’t brag that you’re the best if you can’t back it up.

Schwarz, 25, is someone that WBC heavyweight champion Deontay Wilder would likely knockout in the first round if he were facing him. of course, Wilder wouldn’t waste his time fighting someone so over-matched. Fury’s promoters are putting him in with Schwarz in order to increase his popularity in the United States, and it prove to be a pointless endeavor. It takes quality opposition to turn a fighter into a star. We’re not seeing that in this fight unfortunately.

Fury vs. Schwarz = Showcase for Tyson

This is a showcase fight for Fury in being matched against a guy with very little chance of beating him. That’s one of the reasons why there’s so much pressure on Fury this weekend. He’s got a soft job in front of him in the 6’5″ Schwarz, so now he needs to look spectacular. If Fury struggles, the American boxing fans are going to see him as a pretender, and not in the same class as Wilder. The whole idea behind Fury being matched against a weak opponent like Schwarz is to make him look incredible. That’s why promoters look for easy marks for their fighters. They want the casual boxing fans to think their guys are super talents.

Davison says Fury is stronger than in Wilder fight

Fury’s trainer Ben Davison maintains that he’s a stronger fighter now than in his last fight against Deontay Wilder last December. There’s talk of Fury knocking down sparring partners in camp in preparing for the Schwarz fight. Davison states that Fury wasn’t 100% for the Wilder fight due to him having lost 140 pounds. Now that he’s had the weight off for a long time, he’s stronger, says Davison. Fury still looks flabby around the midsection, and he appears to be carrying around an extra 20 to 30 pounds of look fat.

“He lost a 140 pounds. He’s not going to b 100%. Now that he’s recovered from that weight loss, he’s stronger than previously, of course,” said Fury’s trainer Ben Davison about reports of Tyson knocking guys down in sparring. “Yes [Fury is stronger now than he was for the Wilder fight], and performance-wise, he’s the best I’ve seen him so far.”

Fury’s trainer Davison is pouring the compliments over the head of Schwarz by the bucketful in building him up as much as possible before Saturday. The purpose of this obviously is twofold. One, it gives Fury a proper excuse in case he doesn’t look good in beating Schwarz. With all the compliments that Davison has smothering Schwarz with, the boxing public and media won’t see it as a bad thing that Fury struggled against him. Secondly, Fury look like a superstar after he beats Schwarz. By Davison saying how great Schwarz is, Fury’s status will be faulted into the stratosphere after he destroys the unknown heavyweight. It’s pretty simple to figure out Davison. In a nutshell, you get an easy mark, you smother the fighter with compliments from head to toe, then you crow afterwards after your fighter destroys him. It’s all pretty basic stuff.

“He’s young, unbeaten, and he’s tall. He’s 18 stone, fast hands, and fast feet. There are flaws that I’ll [Tyson Fury] will look to exploit,” said Davison in sounding secretive. “He’s #2 with the WBO. He’s a big guy. Hes tall. Your style has to change when you’re [fighting taller fighters]. We don’t have to make the adaptions for somebody tall. We’ll be looking to fight taller opponents to get us prepared for the Deontay Wilder fight,” said Davison.

Davison: Fury not looking beyond Schwarz

One of the main reasons why Fury and Davison aren’t looking passed Schwarz is because of what happened with former IBF/WBA/WBO champion Anthony Joshua in his recent loss to Andy Ruiz Jr. earlier this month on June 1 at Madison Square Garden in New York. Joshua and his promoter Eddie Hearn had been openly looking beyond the Ruiz fight towards a unification match against Wilder. They took their eyes off the ball, and Ruiz ended up wrecking their plans by stopping Joshua in the seventh round in a one-sided fight.

After Joshua’s defeat, many boxing fans are calling for his trainer Rob McCracken to get the sack. Davison obviously doesn’t want to put himself in the same position as McCracken. However, that’s par for the course. It doesn’t matter whether Fury is focused on Schwarz or not. If he looks bad against the little known German heavyweight, the boxing public is going to want Davison to be canned in favor of a different trainer.

“Yeah, that’s the big one to a certain degree. But, I don’t think about it at all,” said Davison to the telegraph.co.uk. “I don’t look at Wilder at all, because we’ve got Tom Schwarz first. That’s the job in hand, and if we don’t get him out of the way, we aren’t in the place to think about the next challenge.”

Fury thinks he was robbed against Wilder

To this day, Fury still believes that he was robbed last December in his 12 round draw against Wilder. A lot of boxing fans think it was the other way around. Wilder was the one that was robbed. He hit Fury with the harder, cleaner shots in every round of the fight. The judges are supposed to give rounds to the fighter that lands the cleaner shots. They didn’t do that in this case. They were giving Fury rounds for him landing slapping punches.

In the 12th, Fury was knocked out. The referee clearly should have stopped the fight after Wilder dropped Fury. Hopefully, on Saturday, Fury doesn’t say he was robbed if he gets knocked out by Schwarz. That would be a bad look on Fury’s part. He needs to follow the example of Joshua by admitting when he’s been beaten.


« Luis Collazo vs. Jose Benavidez on August 17 on ESPN in Los Angeles, CA