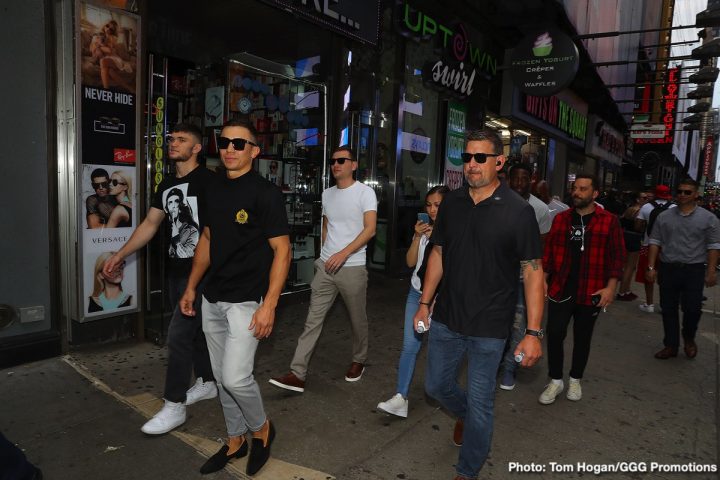 By Barry Holbrook: Gennady ‘GGG’ Golovkin says he’s 99 percent certain that he’ll be fighting a trilogy match with Saul Canelo Alvarez in September on DAZN, as long as he wins his fight this Saturday night against Steve Rolls at Madison Square Garden in New York. GGG says he wants the fight against IBF/WBA/WBC middleweight champion Canelo Alvarez to take place in New York.

Unfortunately for GGG, that’s likely a nonstarter, as Canelo mainly fights in Las Vegas. He’s like Floyd Mayweather Jr. in that respect. If Golovkin insists on fighting Canelo in New York or any other place besides Las Vegas, he could negotiate himself out of the fight. Canelo has made it clear that he likes fighting GGG in Las Vegas, and that’s where it has the best chance of taking place. If Golovkin loses another controversial decision to Canelo in Las Vegas, many fans will ignore the result anyway, and just view it as Alvarez getting special treatment yet again.

“This is my first deal with DAZN, my first fight,” said Golovkin to ESPNMMA. “I don’t feel pressure. He [Johnathon Banks] had good experience with Wladimir Klitschko. He had good experience with Emanuel Steward. I need this experience. I want to learn more. I think so,” Golovkin said when asked if he’ll be facing Canelo Alvarez in September. “Right now my focus is on Rolls. If I beat him, then yeah, 100% [fight with Canelo happening in September]. Everybody wants. It’s a good deal for business, for money, for everything,” said GGG.

Golovkin isn’t the A-side in the negotiations for a third fight with Alvarez, and he needs to understand that. If the Mexican star wants or needs the fight to take place in Las Vegas, that’s where it will take place. DAZN obviously wants Canelo to face Golovkin again in a trilogy in order to pump up the subscriptions, but if Alvarez is insistent on fighting GGG in Vegas or else nowhere, then he’s going to have to bend to his wishes. Canelo is stubborn. If Golovkin doesn’t bend to his will of wanting the third fight in Vegas, then he’ll likely walk away. It won’t make DAZN happy not to have the Canelo vs. GGG trilogy fight take place, but they should have had it written in Alvarez’s contract that the fight MUST take place.

Canelo vs. GGG rivalry is becoming played out

A lot of boxing fans have grown weary of seeing Canelo and Golovkin fight each other. They’d like to see Golovkin (38-1-1, 34 KOs) face WBO middleweight champion Demetrius Andrade. That’s who Golovkin should be fighting next instead of facing the unknown 35-year-old Rolls, who few casual or even hardcore boxing fans have ever seen or heard of before. It would be interesting to know who came up with the idea for Golovkin to fight Rolls. Was it Tom Loeffler of K2 or was this a move done by DAZN? Golovkin didn’t help the trilogy fight with Canelo by choosing Rolls. That was a mistake on GGG’s part to pick that guy of all fighters. If Golovkin needed a weak opponent for a confidence builder, he should have found someone that American fans have heard of like David Lemieux.

It’s doubtful DAZN are the ones that picked Rolls as GGG’s opponent for next Saturday, because he’s clearly a worse foe than Canelo’s choice of former WBA ‘regular’ super middleweight champion Rocky Fielding last December. At least Fielding was a title holder, albeit a paper one in the eyes of a lot of boxing fans. Many people want see Canelo fight WBA Super World champion Callum Smith in September. Smith is new blood that a lot of U.S fans haven’t seen fight before. Canelo vs. Smith would be entertaining from start to finish. However, Smith might have scared Canelo and Golden Boy away permanently with his destructive stoppage win over former WBA ‘regular’ middleweight champion Hassan N’Dam last Saturday night on the undercard of Anthony Joshua vs. Andy Ruiz Jr. at Madison Square Garden.

“For me, I like New York,” GGG said when asked about his thoughts of facing Canelo in a trilogy fight in Las Vegas, Nevada. A minimum of three years. I don’t know. If I beat Rolls, we’ll see,” said GGG about him continuing his career when his three-year contract with DAZN expires in three years. “I just know his [Rolls] name, and his record,” said GGG when asked what he knew about Rolls. “To me, it’s important that he’s a professional athlete. He’s from Canada.”

Golovkin should assume that Golden Boy Promotions will be resistant to the idea of Canelo facing him anywhere but Las Vegas. Canelo has had great luck facing GGG in Las Vegas at the T-Mobile, where he’s dodged two defeats. They’re not likely going to let their biggest moneymaker fight Golovkin in New York or anywhere else other than Las Vegas. It won’t be a big deal if the third fight takes place in Las Vegas, as long as Golovkin is busier with his hands. His new trainer Johnathon Banks has supposedly changed his fighting style by having him throw combinations instead of single shots.

We’ve seen that with Golovkin’s mitt workouts with Banks. However, there’s a big difference between throwing a lot of punches at a trainer holding mitts , and using that kind of style in an actual fight. If Golovkin can show that he’s capable of throwing a lot of shots, he’ll have a good chance of defeating Canelo in Las Vegas. GGG will still need to make it conclusive for him to get a decision, but he should be thinking knockout rather than decision. It would be a mistake in letting the fight go to the cards.