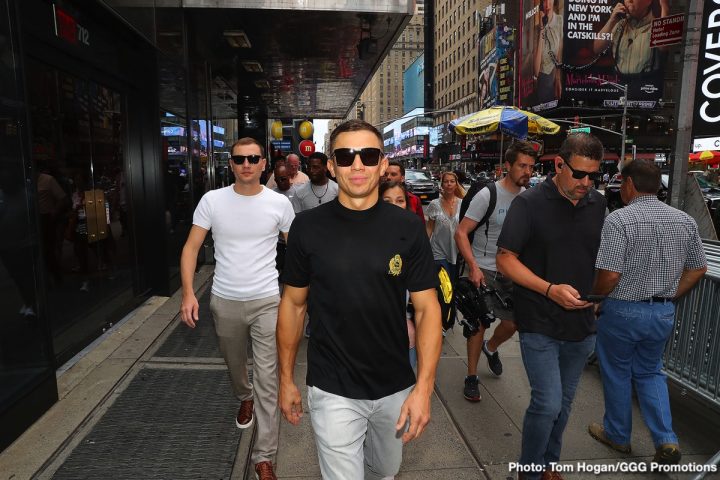 GGG doesn’t say what in particular Joshua did to disrespect Ruiz, but it’s very likely the way that AJ tried setting up fights with WBC heavyweight champion Deontay Wilder and Tyson Fury in the last two weeks BEFORE he fought Ruiz last Saturday night. Joshua and his promoter Eddie Hearn of Matchroom Boxing were just assuming that they had the win in the bag. They had to believe that Ruiz Jr. posed no threat. They weren’t talking up the fight at all. Joshua seemed to think the fight was going to be a walk in the park for him, and that was a mistake. This was the first time for Joshua fighting outside of the UK as a pro, and he wasn’t ready.

It was as if Joshua was fighting Wilder instead of Ruiz. It was kind of hard to believe, but it showed that Joshua had little interest in the Ruiz match. That’s on Hearn for setting that fight up. Joshua is the type of fighter that needs to be motivated to be at his best, and he clearly wasn’t excited with this fight.

“Everything. My thought is like, ‘Welcome to America.’ He looked like a superstar coming to the US. No, come on, this is very serious business. You can’t disrespect your opponent,” said GGG to ESPNMMA.

The part where Golovkin says Joshua did “everything” wrong in the fight was true. Joshua did do everything wrong. His defense was nonexistent in the fight, and he failed to use his height and reach the way he should have. After Joshua knocked Ruiz down in the third, he foolishly rushed him and was clipped by a left hook. That was the beginning of the end for Joshua. Four knockdowns of AJ quickly followed until he quit in the seventh round.

GGG doesn’t want to make the same mistake that Joshua did when he steps inside the ring this Saturday night against unbeaten Steve Rolls (19-0, 10 KOs) on DAZN at Madison Square Garden in New York. The 35-year-old Rolls doesn’t have the same amateur background that Ruiz had going for him, so it’s not going to be easy for him to try and get the better of Golovkin. Although Joshua won an Olympic gold medal in the 2012 Olympics, he’s not as polished as 2004 Olympic silver medalist GGG. The way Joshua has fought during his most important fights as a pro, he looks like a raw amateur.

Ruiz says he holds the cards when it comes to where the location for the rematch with Joshua will be taking place. Ruiz figures that as the IBF/WBA/WBO heavyweight champion, he calls the shots where the rematch with AJ will be started. Joshua’s promoter Eddie Hearn wants the second fight to take place in the UK. It could come down to what the rematch clause says. If Hearn was smart enough to have the location of the second fight included in the contract, then Ruiz will have to fight Joshua in the UK. He won’t have a choice unless he wants to vacate all three heavyweight titles.

Joshua has learned his lesson, and won’t dare look passed Ruiz again. Earlier on Tuesday, Hearn announced that Joshua has triggered his rematch clause for the second fight against Ruiz. Team Joshua met and decided to take the rematch. The date and location of the Joshua-Ruiz rematch is still to be determined. Ruiz wants it in Mexico or the U.S. We’ll see which of the two fighter’s prevail in having it their way. Joshua is going to need every advantage he can get for him to beat Ruiz. That includes home country advantage, judges, gloves, ring and the referee. Even with all that, it might not be enough for Joshua to win the fight.

Ruiz: I hold the advantage in negotiations for rematch with Joshua

“I have the upper advantage right now [in negotiation position for a Joshua rematch]. I know that’s what he says [that Hearn and Joshua want rematch in the UK],” said Ruiz to AB Boxing News. “As long as I talk to Al Haymon and my team, we’re going to figure it out where. It really doesn’t matter where, as long as we get back in the ring if we show the fans what they want to see,” said Ruiz.

Ruiz admitted that he’s not certain what the rematch clause says about where the fight will take place. He’s going to speak with his adviser Al Haymon. By now, Ruiz likely has found out whether he has to face Joshua in the UK or not.

“I’d love to have it here [New York] or in LA,” said Ruiz Jr. about wanting the Joshua rematch in the U.S. “I don’t know,” said Ruiz when asked if the rematch with Joshua will happen right away or later on. “I have to look at the contract. I’m the champion. I call the shots now. So we’re going to see what happens.”

Last Saturday was Joshua’s debut fighting in the United States, and suffice to say, he didn’t impress the fans. It’s too late for Joshua to go back and win over the casual boxing fans from the states, as they now have formed their opinion of him. Many of them see Joshua as over-muscled fighter with poor stamina, limited skills and no punch resistance. Even if Joshua beats Ruiz in the rematch, which isn’t a forgone conclusion, it’s too late to change the opinions of the fans. They don’t see Joshua in the same class as WBC heavyweight champion Deontay Wilder or Tyson Fury. Joshua will just have to be satisfied with doing his best to try and avenge his loss to Ruiz. If Joshua loses to Ruiz again, then his decision to make the rematch will have backfired.