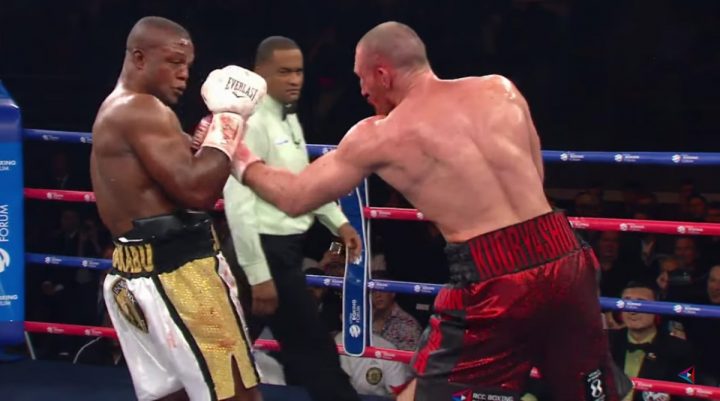 By Mark Eisner: Ilunga Makabu (25-2, 24 KOs) stopped the hard hitting 33-year-old #5 WBC Dmitry Kudryashov (23-3, 23 KOs) by a fifth round knockout on Sunday in an exciting action-packed fight for the World Boxing Council Silver cruiserweight title at the Uralets Arena in Ekaterinburg, Russia.

Makabu, 31, hurt #Kudryashov with big shots in the fifth round, which led to the referee Hector Afu stepping in to halt the fight with Kudryashov still on his feet. The time of the stoppage was at 2:36 of round five.

Kudryashov dropped in round two

Earlier in the contest, #4 WBC Makabu dropped the Russian Kudryashov in the second round with a left hook to the head. Both fighters threw left hooks at the same time, but Kudryashov was the one that went down from the shots. Makabu stumbled an almost fell from the impact of the hard left from Kudryashov.

Both fighters were hurt multiple times in the contest. One lost track of the amount of times both guys were buzzed by big shots. It was a winnable fight or either guy, but they weren’t willing or able to throw the combinations needed to knockout their opponent. Instead of throwing sustained flurries, Makabu and Kudryashov were loading up with single shots in trying to score a one-punch knockout, and that made their work a lot harder.

In round three, Makabu was teeing off on Kudryashov and looking close to getting a knockout. However, in the last seconds of the round, Kudryashov unleashed a big right hand that shook up Makabu, sending him fleeing in the final moments of the round. It was a punch that would have knocked out most fighters in the cruiserweight division, but Makabu was able to take the shot without getting dropped or stopped.

Kudryashov’s nose looked damaged during the fourth round, and he also had a cut over his right eye. The referee stopped the action at one point in the round to have the ringside doctor examine Kudryashov nose and eye. The doctor allowed the action to continue, but it was obvious that the fight wasn’t going to go too much longer.

The victory for Makabu is his sixth straight since his third round knockout loss to Tony Bellew in a failed attempt to capture the vacant World Boxing Council cruiserweight title three years ago in May 2016. In that fight, Makabu made the mistake of covering up on the ropes against Bellew, and he got bombed out by him.

It’s possible Makabu could soon be fighting for the vacant WBC cruiserweight title that was recently stripped from champion Oleksandr Usyk. The WBC had previously planned on having the vacant belt on the line for last Saturday’s fight between Mairis Briedis and Krzysztof Glowacki in their World Boxing Super Series final fight in Riga, Latvia. The WBC changed their mind for some reason, so their cruiserweight title is still vacant.

In the chief support on the Makabu vs. Kudryashov card, undefeated cruiserweight prospect Alexey Egorov (9-0, 7 KOs) stayed unbeaten with a third round stoppage victory over Roman Golovashchenko (20-4, 18 KOs) to capture the vacant WBA Gold title. Egorov knocked down Golovashchenko in rounds two and three.

Thurman Finally Gets His Chance At Superstardom »