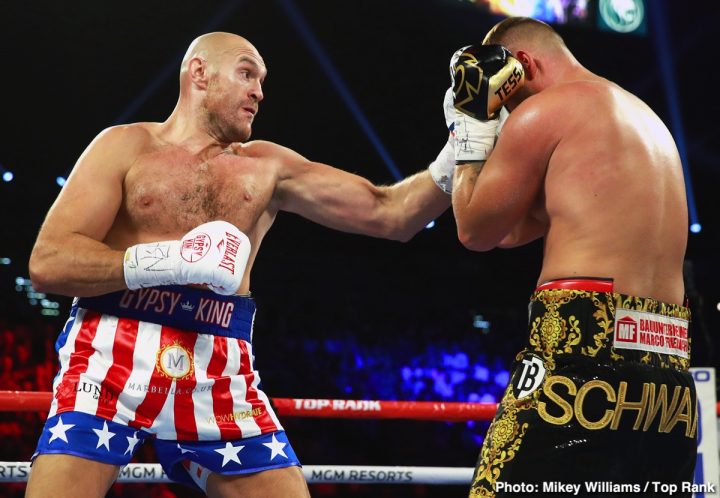 By Barry Holbrook: A gleeful sounding Top Rank promoter Bob Arum is already predicting a knockout win for Tyson Fury over Deontay Wilder in their potential rematch in the first half of 2020. Fury (28-0-1, 20 KOs), who is marketing himself as a lineal heavyweight champion, got passed Tom Schwarz (24-1, 16 KOs) last Saturday night in a ESPN+ streamed fight at the MGM Grand Garden Arena in Las Vegas, Nevada.

Schwarz was knocked down, and bloodied before the fight was stopped by referee Kenny Bayless at 2:56 of round two. For the many fans that had traveled to Las Vegas hoping to see a competitive match-up between Fury and the 25-year-old German heavyweight Schwarz, they went home having seen a quick fight that wasn’t competitive.

It was a disappointment to some boxing fans, who were hoping they would get more for their time, money and commitment that they had put in to see the Fury-Schwarz fight. As the saying goes, ‘let the buyer beware.’ It’s too bad the casual boxing fan didn’t know ahead of time that Schwarz had no chance of winning. It’s always good to let the fans know ahead of time what kind of fight they’re going to see so they’re not upset afterwards when it’s a mismatch.

“I haven’t seen a fighter with that much charisma since Muhammad Ali,” Arum said.

Recently, Arum has compared his lightweight Vasiliy Lomachenko to boxing great Ali, but now he’s lumping Fury into that mix as well. It might be better for Arum to compare Fury to other guys instead of someone as great as Ali, because he’s not beaten anyone during his career as of yet to be compared ‘The King.’ Fury’s three wins since he launched his comeback have been against 2nd tier opposition in Schwarz, Sefer Seferi and Francesco Pianeta.

If Arum is going to keep comparing his Top Rank fighters to Ali, it loses it’s meaning after awhile. Arum should save his comparisons to only the great fighters. Lomachenko and Fury are good fighters, but neither of them has beaten the type of opposition during their careers for them to be compared to Ali. Both of those guys are in their 30s now, and still looking for a signature win.

Arum will have Fury fighting next on October 5th against a still to be determined opponent on ESPN+, and then he’ll look to put together the rematch between him and Wilder. What’s interesting is that Arum is already starting the promotion for the Wilder-Fury rematch despite the fact that both guys have fights to win before the end of the year. Wilder (41-0-1, 40 KOs) has a potentially tough rematch against Luis Ortiz (31-1, 26 KOs) that he needs to win in September or October before he can think of a second fight with Fury.

“Deontay Wilder is not going five rounds with him. We will have another fight, then we will fight Wilder,”

It’s no forgone conclusion that Wilder will beat the 40-year-old Cuban Ortiz, because he almost lost to him last year in March. Ortiz had Wilder close to being knocked out in the seventh round of that fight. If not for the delay of the start of the eighth round by the New York Commission, Ortiz might have won that fight. Unless Arum is good with putting together a rematch between a beaten Wilder and Fury, it would be best for him to wait for the smoke to clear from the Wilder-Ortiz second contest before starts banging the drum for the Wilder-Fury fight early next year.

Fury still needs to win his October fight, although he’ll likely be put in with another weak opponent by Top Rank. Fury is in safe hands for his next fight. Top Rank won’t risk putting him in with a good fighter for fear of something bad happening to him. Wilder, on the other hand, is taking real risks with his career in facing a talented Luis Ortiz. Even Anthony Joshua wouldn’t fight him.

“That was amazing. “This was one of the great shows I’ve ever seen and not just because of the boxing,” said an excited Arum at the post-fight news conference about Fury’s win over Schwarz. “He’s an entertainer. He is truly unique. Now that he’s in shape, he can knock out every heavyweight in the world.”

Fury at risk of getting stopped by Wilder

We know that Fury didn’t knockout Wilder last December, and didn’t come close to doing that. Wilder hurt Fury badly last December with the 12th round knockdown. Fury admitted afterwards that he didn’t remember getting up from that. If there’s going to be a knockout in the second fight between them, you’ve have to believe it’ll be Wilder that does the job. If Fury is going to beat Wilder, it’ll be by a decision, not a knockout. He doesn’t hit hard enough, and he’s not fast of hand. Fury looked slow last Saturday night against Schwarz. It didn’t matter, because Schwarz was too slow and limited to take advantage of Fury’s lack of hand speed.

Schwarz made a huge mistake in backing up to the ropes and covering up in the second round. This is the same error that Schwarz made in his match against Senad Gashi last year. In that bout, Schwarz fell down and didn’t get back up after he was head-butted by Gashi in the sixth round. The fight was halted at that point, and Schwarz was given a victory by a sixth round disqualification.