Thurman Finally Gets His Chance At Superstardom 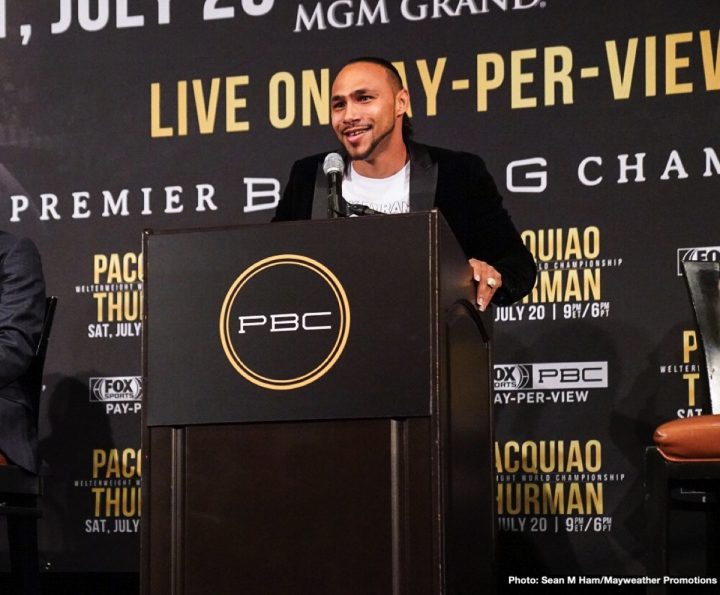 By Raj Parmar: It was in year 2015 that an upcoming Keith Thurman vowed that he wanted to be the one to destroy the face of boxing at the time in Floyd Mayweather. He went so far as to come up with a slogan “Burn Money” in reference to Floyd’s nickname “Money” and how eager he was to bring him down.

Mayweather would instead go on to engage in the richest fight in boxing history when he outpointed rival Manny Pacquiao in a hugely anticipated showdown. Although many feel the fight itself was a letdown, Mayweather pocketed a life changing sum of money and would retire from boxing later in 2015.

After Mayweather’s retirement, Thurman had to settle for fights against lesser known boxers however in the process became a world champion in the star-studded welterweight division. Thurman quickly realized however that being a champion did not make you a superstar, and that without a big win over an established name he would not easily attain a mainstream level of notoriety.

Some of the biggest names in boxing’s long history became household names after dethroning an established star in the process. Boxing’s greatest attraction in Muhammad Ali vaulted himself to the mainstream public by taking down dominant champion Sonny Liston. Although he already was the youngest heavyweight champion in history, Mike Tyson catapulted himself to newer heights by destroying the longtime heavyweight powerhouse Larry Holmes.

The biggest boxing stars of the 2000’s in Mayweather and Pacquiao became public sensations after each of them got wins over boxing icon Oscar De La Hoya. Although Thurman possesses an impressive ring IQ and carries considerable power in his punches, he will not become an overnight sensation unless he can take down a big name like the past up and comers before him have done.

Against Pacquiao, Thurman finally has his chance to reach superstardom. Although the 40-year-old Pacquiao is nowhere near the fighter he was ten years ago (his former promoter Bob Arum recently suggested that he’s on the verge of brain damage if he doesn’t retire), Pacquiao is still a huge name in the sport and is coming off two impressive wins including a world championship title victory.

Therefore with an impressive win over Pacquiao, the opportunity will finally be there for Thurman to become the biggest fighter in the crowded welterweight division and also one of the most recognizable faces in the sport of boxing as we head into the 2020’s decade.

Boxing » Keith Thurman » Thurman Finally Gets His Chance At Superstardom