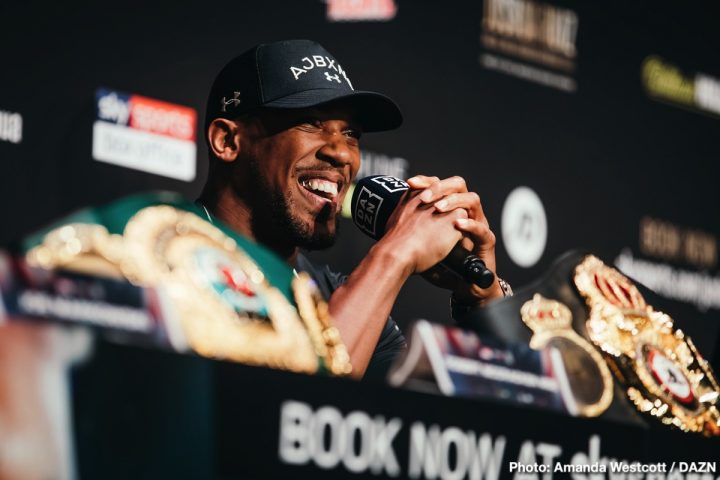 What Joshua appears to be doing by saying that Wilder’s title reign is about to end is to make him worried about his future, so that he’ll sign for a fight against him. It probably won’t work, but that it looks like Joshua is attempting to do.

Joshua (22-0, 21 KOs) obviously isn’t happy that Wilder chose not to fight him next, and he spoiled his ability to help build up his fight this Saturday against Andy Ruiz Jr. by announcing that he’ll be facing Luis Ortiz next.

“It’s impossible for Wilder to probably stay champion for the rest of his time. He’s had close fights with Molina, with Fury, with Ortiz. It’s coming close to a time when that belt should change hands,” Joshua said.

Joshua isn’t clear about how much longer he thinks Wilder will hold onto his title. There’s a very good chance that Wilder will win his next three potential fights against Luis Ortiz, Adam Kownacki and Tyson Fury. Those are three winnable fights for Wilder. Those matches will take Wilder until late 2020. Once those guys are out of the way, Wilder has pretty soft opposition in the World Boxing Council’s top 15. Wilder could hold onto his title for a long time to come.

You can’t blame Joshua for not being a boxing historian. He’s a boxer after all. If Joshua followed the sport closely, he would have realized that Wilder’s fight with Eric Molina wasn’t close. It was a mismatch. Wilder knocked Molina down four times in the fight in dropping him once in round 4, twice in round 5, and a final time in the 9th before referee Jack Reiss finally stopped it. The fight should have been stopped in the fifth round when Molina twice turned his back towards Wilder. On one of those occasions, Molina not only turned his back to Wilder, but he literally ran. Reiss is the same referee that chose not to halt the Wilder vs. Tyson Fury fight fight in the 12th after Wilder knocked Fury out cold.

Reiss gave Fury a count while he was lying on the canvas with both eyes closed. As far a the Luis Ortiz fight, Wilder knocked him down three times in the fight in stopping him in the 10th. The rematch will likely be a quick knockout win for Wilder, as Ortiz is starting to look old at 40.

Joshua was almost knocked out by the following fighters: Dillian Whyte, Alexander Povetkin, Carlos Takam and Wladimir Klitschko. Joshua looked poor in all of those fights. Against Parker, the referee prevented inside fighting, so that helped Joshua immensely. The fight took place in Cardiff, Wales. It’s unclear who picked the referee for that fight.

The referee didn’t seem to understand that inside fighting is allowed in boxing. Joshua was getting his head taken off by Parker each time the two were in close, but the referee changed the entire complexion of the fight by pulling Parker off of Joshua when he was trying to fight in close. It was baffling to see at that level not understand that fighters are allowed to fight on the inside. We can only guess what would have happened if Parker was allowed to fight on the inside against Joshua. There’s a very good chance he would have beaten him.

Joshua: ‘If I fight Luis Ortiz for the undisputed championship it would be Fight of the Century’

According to Joshua, it doesn’t matter who he fights for the final title that’s not in his possession. Joshua says that if loses his WBC title to Luis Ortiz in a rematch, then the boxing public will be just as excited as a fight between him and Ortiz than they would in a Joshua-Wilder fight. In other words, the fans just want to see Joshua involved in fighting someone, anyone, for all four of the heavyweight titles. Joshua mistakenly feels that the titles are more important to the fan than popular fighters like Wilder.

Joshua’s belief that the fans care more about the titles than the fighters that hold the belts shows his naivety. Joshua doesn’t understand yet that the casual boxing fan don’t care about titles. They care about popular fighter; hence you be hugely popular even without titles. Saul Canelo Alvarez had no titles in his possession when he fought former IBF/WBA/WBC middleweight champion Gennady Golovkin the first time in 2017, and yet he was the more popular fighter of the two and the A-side. That fight showed that boxing fans care more about popular fighters more than they do about world titles.

“Even if I fight [Luis] Ortiz, it could be the fight of the century anyway, because it’s undisputed,” said Joshua. “Wilder is still building his profile. It’s the undisputed [I care about]. It could be Ruiz or Ortiz. It’s still a massive fight for the undisputed. Wilder has done a great job of talking up the fight. He’s proven himself by winning, but talking up a fight he hasn’t managed to make yet. It’s all irrelevant what you say unless you back if up,” Joshua said.

Joshua is kidding himself in saying that a fight between him and Luis Ortiz would be a “fight of the century.” It wouldn’t because Ortiz isn’t well known with the casual boxing fans in the U.S, and the fans wouldn’t care that all four titles would be on the line. That’s something that an ultra-hardcore boxing fan would only care about. Just an average fan wouldn’t give two figs that Joshua is fighting for the undisputed heavyweight championship. Casual fans don’t care about that junk. They care about good fights against guys that are supposedly the best.

“I respect him. He’s a good fighter. He had 100 amateur fights. He won 100 of them,” Joshua said about Ruiz Jr. “He’s had 32 fights, and he’s lost one of them against Joseph Parker. So he’s a world level fighter. What made me respect him is he put his name on the line to want to fight. It’s not going to be easy. I’m not saying anyone that signs to fight me is going to be easy. But he’s coming to take what I’ve worked for, and I’m prepared for that. Jarrell Miller was a big guys, and he threw a lot of punches. He just walks forward, eating punches to get his size on you. Even though Andy Ruiz is a big guy, he picks his punches a lot better. He’s a good slipping and ducking fighter, so he’s always going to counter punch you,” Joshua said.