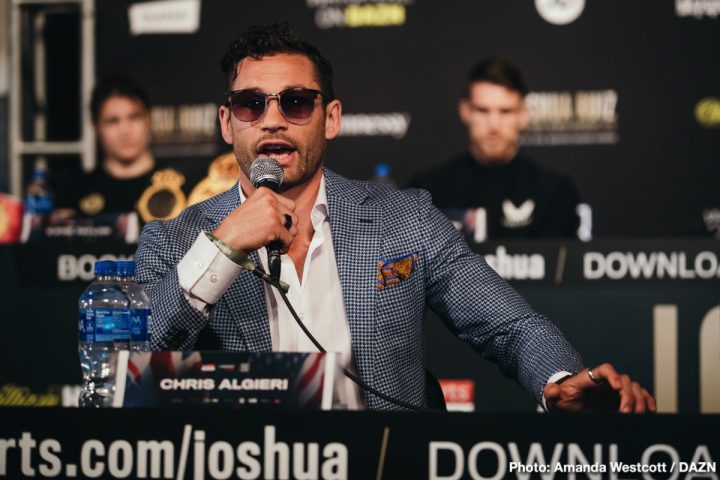 Mark Eisner: Chris Algieri thinks former eight division world champion Manny Pacquiao can beat Keith ‘One Time’ Thurman in their fight this summer on July 20. Former WBO light welterweight champion Algieri (23-3, 8 KOs) likes this match-up for Pacquiao against the 5’7″ Thurman, because he’s not fighting a guy that is so much bigger than him like the 5’9 1/2″ Errol Spence Jr. or a roughhouse fighter like Shawn Porter.

It was a slaughter anyway you wanted to look at it. You’ve got to give Algieri credit for making it the full 12 round distance, but Pacquiao seemed to coast. Each time Pacquiao would drop Algieri, he didn’t put much effort into finishing him. It was as if Pacquiao like a cat playing around with a mouse. Algieri was being toyed with in that fight.

“Honestly, I think Manny can win that fight,” Algieri said to Figthhub about the July 20th Pacquiao vs. Thurman fight. Manny’s incredible for one. It’s amazing at the age he’s at now, he’s still beating top fighters. He’s still willing to take these top fights. I was live at the [Lucas] Matthysse fight in Malaysia, and I saw Manny, and I was curious to see how the fight was going to go,” Algieri said.

The speed and punching power that Pacquiao is showing in his early workouts are impressive. He’s got the motivation to work hard in this fight, and he’s doing just that. Thurman has talked a lot about sending Pacquiao into retirement on July 20th. That’s motivated Pacquiao to work harder than he has in ages. Pacquiao is energized for this fight, and wanting to defeat Thurman by knockout. Pacquiao says his goal for this fight is to show that age is just a number, and that he can still fight at 40.

“I knew he was going to win the fight, but I wanted to see how he was going to react with someone who is a real puncher,” said Algieri. “There were no problem pulling the trigger. His in and out was still there. His ability to see, pull the trigger, and react , which is what usually goes first with older guys was still there. That makes him an incredibly dangerous guy, even for the top welterweights now,” Algieri said.

Matthysse tried to knockout Pacquiao, but he took too many heavy shots from him, and was forced to fight defensively. It was a surprise how quickly Pacquiao was able to stop Matthysse, because the only other fighter that stopped him in the past was Viktor Postol. That was from an eye injury.

Pacquiao has looked sharp in his last two fights beating Adrien Broner and Lucas Matthysse with ease. Pacquiao defeated Broner by a 12 round unanimous decision last January. The fight was more one-sided than the scores would suggest.

Broner was covering up, moving and fighting defensively throughout the fight. It was a clear cut win for Pacquiao. In his fight before that, Pacquiao stopped World Boxing Association 147-pound champion Matthysse (39-5, 36 KOs) by a seventh round knockout last year on July 15, 2018 in Kuala Lumpur, Malaysia. Pacquiao knocked

IBF welterweight champion Errol Spence Jr. (25-0, 21 KOs) is too big for Pacquiao, according to Algieri. He doesn’t want to see Pacquiao take on a dangerous fighter like Spence if he can help it. Algieri believes that Pacquiao’s lack of reach would hinder him against the 29-year-old Spence, who has long arms. Pacquiao would be giving away five inches in reach to Spence. Further, Algieri hopes Pacquiao won’t fight WBC welterweight champion Shawn Porter, because he thinks he would be too physical for him.

“I just think size-wise, he’s a little under-armed for some of those welterweights out there,” Algieri said. “But I think that not only from a boxing standpoint, and not only from a nostalgic standpoint, I would be in Manny’s corner for that fight,” said Algieri.

Pacquiao passed up on the idea of fighting Spence after agreeing to fight him next. Pacquiao agreed to fight Spence after his fight with Mikey Garcia last March. However, Pacquiao quickly changed his mind after reflection, and went with the fight against Thurman. A lot of boxing fans think Pacquiao lost his nerve after seeing how easily Spence defeated the 5’6″ Mikey Garcia last March. Mikey is close to the same height as Pacquiao, and he couldn’t reach Spence with his shots.

Porter, 31, would be winnable fight for Pacquiao, but there won’t be any reason to fight him soon. Porter is expected to fight Spence in September in a unification fight. Most boxing fans see that as an easy win for Spence against the shorter Porter.

Thurman doesn’t look like the same fighter he was several years ago. The inactivity has hurt Thurman’s career. It’s going to be difficult for Thurman to get back to the level he was at before started having injury problems in 2017. This fight is coming at the right time for Pacquiao. He’s catching Thurman in his second fight of his comeback. Thurman could use another “get back” fight or two for him to sharpen his game before fighting guys like Pacquiao and Spence.