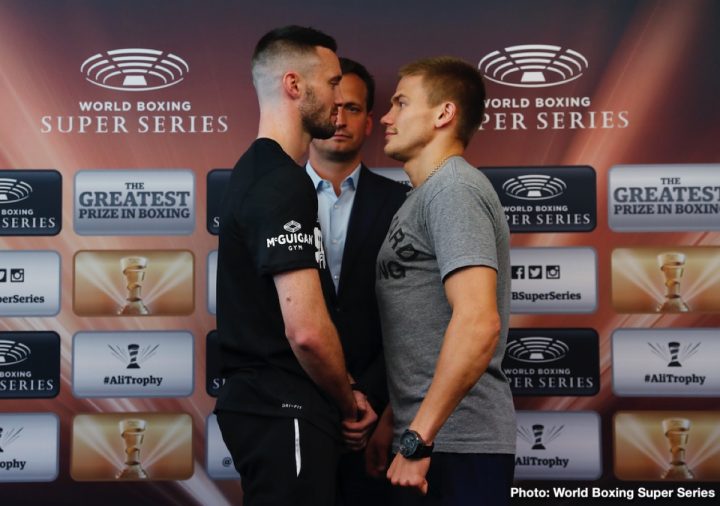 By Barry Holbrook: WBC Silver 140-pound champion Josh Taylor and IBF light welterweight belt holder Ivan Baranchykwill be facing each other this Saturday in the WBSS semifinal tournament on May 18 at The SSE Hydro in Glasgow, Scotland. The Baranchyk vs. Taylor fight will be shown on DAZN and Sky Sports.

Nicknamed, “The Beast,” Baranchyk (19-0, 12 KOs) is the underdog in this fight in the eyes of a lot of boxing fans. Not only is Baranchyk facing the highly skilled 2012 Olympian in 28-year-old Taylor (14-0, 12 KOs), but he’s also fighting him on his own home turf in Glasgow. The place is expected to be packed with Taylor’s fans on Saturday.

The winner of the Taylor vs. Baranchyk will be fighting WBS World light welterweight champion Regis Prograis (24-0, 20 KOs) in the final of the World Boxing Super Series tournament. Prograis, 30, defeated WBA champion Kiryl Relikh (23-3, 19 KOs) by a sixth round stoppage last month in their semifinal fight in the WBSS tournament on April 27 at the Cajun Dome, in Lafayette, Louisiana. Prograis completely dominated Relikh from start to finish. The performance was so impressive by Prograis that many boxing fans are already crowning him the WBSS tournament champion. 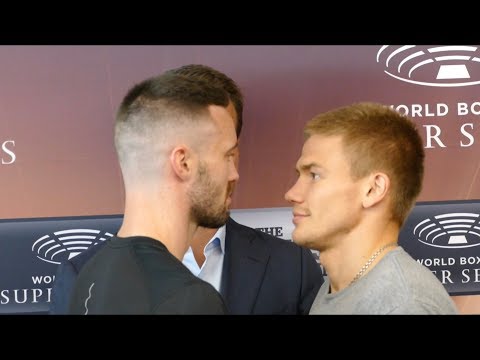 The judges need to get the scores right

Taylor was recently the beneficiary of a set of wide scores last June in a win over former WBC light welterweight champion Viktor Postol in Glasgow. There’s no question that Taylor did enough to deserve the victory, but it appeared to be a narrow victory. However, the judges scored it for Taylor by the following lopsided scores: 117-110, 118-110 and 119-108. The boxing public didn’t agree with those scores. They saw the fight as a close win for Taylor, but nowhere near the set of scores the judging crew turned it on that night.

Hopefully, this Saturday’s Taylor vs. Baranchyk fight isn’t tainted in the same way with strange scoring by the judges. If Taylor is going to win this fight and receive credit from the fans, he’s got to be able to do it without controversy. There are too many fans that will be watching this Saturday’s Taylor-Baranchyk fight for oddball scoring to be ignored. The judges need to make sure they have their eyes open for this fight, and they’re wide awake. It would be bad news if one of the two fighters receives a decision that the fan don’t agree with.

Baranchyk, 26, will be coming off of a seven-month layoff when he makes his first defense of his IBF 140-pound title that he captured in the quarterfinal of the World Boxing Super Series light welterweight tournament on October 27 last year in stopping the game but limited Anthony Yigit in the seventh round in New Orleans. Yigit’s eyes and face were badly swollen from Baranchyk’s powerful punches, making it necessary for the contest to be halted. Yigit wanted to keep fighting, but he was taking too much punishment, and his face wasn’t going to be able to hold up for very much longer under the bombardment he was receiving from the hard hitting Russian Baranchyk. In the months after the fight, there was talk of Baranchyk possibly dropping out of the WBSS tournament due to money issues with the organizers of the tourney, but the problems were worked out and he stayed in.

“I am very confident of winning,” said Baranchyk. “I am going to beat Taylor by beating him again and again and then beating him some more!”

If Baranchyk is able to connect with the same amount of shots to the face of Taylor as he landed on Yigit, we could see another stoppage for Ivan. Taylor is a good fighter, but there’s only so much a guy can take before they start swelling up or breaking down. Baranchyk hits hit, and he never stops coming forward. This isn’t going to be a similar fight as Taylor’s quarterfinal matchup against American Ryan Martin, who fought like he was afraid to let his hands go. The WBSS tournament organizers might as well have given Taylor a bye for his quarterfinal round rather than have him fighting someone so unprepared as Martin was. Taylor didn’t look sensational in the fight. Martin failed to throw punches. It was the oddest thing to watch. Martin showed up for the fight looking in good shape, but then he chose not to throw punches. This was a big step up for Martin, as his previous fights as a pro had come against lower level opposition. Martin clearly wasn’t ready to fight someone like Taylor. Baranchyk is the complete opposite of Martin in every respect. Baranchyk will be attacking Taylor the entire fight, forcing him to go to war with him. The winner of this fight will have to wade through a hail of fire to get the ‘W’. This won’t be the disappointing mismatch that boxing fans saw in the Taylor vs. Martin quarterfinal last November in Glasgow.

Baranchyk wants to spoil it for Taylor’s fans

If Baranchyk gets his way, he’s going to ruin the night for Taylor’s fans The SSE Hydro in Glasgow this Saturday. For Baranchyk to accomplish that goal, he’s going to need to jump on Taylor early like he did Yigit, and beat him up. If Baranchyk allows space between him and Taylor, he’s going to get out-boxed. The crowd will be on Taylor’s side, cheering him the entire fight. Any close rounds will likely be scored in Taylor’s favor. Baranchyk’s best chance of winning the fight is to score a knockout or a few knockdowns to make sure the judges don’t give it to the home fighter Taylor.

“I know that Taylor is a talented fighter and that the fight is in his backyard, but I am looking forward to putting on a spectacular performance and defending my title,” Baranchyk said. “The boxing fans in Glasgow can expect me to beat up their hero.”

This is not going to be an easy fight for Baranchyk. Taylor is a bigger puncher than Yigit, and he’s an excellent inside fighter. The best shot that the 26-year-old Baranchyk has in winning this fight is if he can outwork 28-year-old Taylor, and use his conditioning to get the victory. Baranchyk is a little bit younger than Taylor, and he’s more accustomed to fighting face paced fights than him. It’s going to be difficult through for Baranchyk to deal with the 5’10” Taylor’s height, reach and his southpaw stance. Those are big advantages for Taylor, along with him having the crowd in his favor.

This writer sees Taylor winning this fight by a hard fought 12 round unanimous decision. It’ll be a close fight with both guys taking a lot of punishment, but Taylor will edge it out with some of the inside work. The crowd will certainly help Taylor win the close rounds, and give him a mental boost when he starts getting discouraged by the pressure that Baranchyk is putting on him. Without the home advantage, Taylor might lose to a fighter like Baranchyk. Taylor has a lot of talent, but he’s not as good as his boxing fans think he is. He’s not performed as a pro at the level that we’re seeing from the likes of Prograis. For that reason, Baranchyk has a shot of winning on Saturday if he can take the crowd and the judges out of the equation.

Callum Smith vs. Hassan N’Dam close to being finalized for June 1st at MSG, NY »