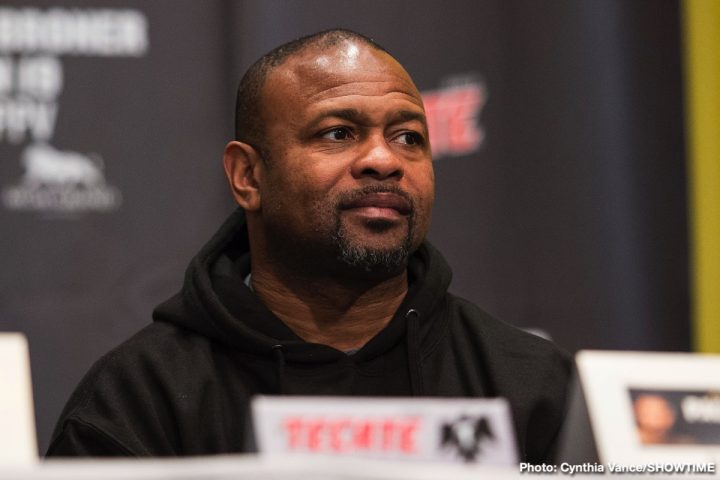 By Darren Paradise: In the eyes of many, Sugar Ray Robinson sits comfortably at the summit of boxing’s all time great “pound for pound” rankings, he looks down not only at legends of yesteryear such as Harry Greb, Henry Armstrong, Joe Louis and of course Muhammad Ali but also the modern day greats like Floyd Mayweather, Manny Pacquiao, Vasyl Lomachenko and Saul “Canelo” Alvarez. Scrolling through these iconic names, I come across one of my own childhood heroes, Roy Jones Junior, sitting at a paltry number 39.

Tomorrow marks the fifteen year anniversary of the night Antonio “The Magic Man “Tarver knocked Jones out in two rounds revealing to the world that RJ was not “Superman” in fact he was a mere mortal. Going into this fight with a record of 47-1 (the sole loss a controversial disqualification, avenged with a single one round massacre) RJ had a who’s who of future Hall of Famer’s on his resume, the likes of James Toney, Mike McCallum, Bernard Hopkins and Virgil Hill were all simply brushed aside with a disdain that suggested they did not even belong.

Billed as “More than Personal” it was a rematch of an encounter shared in November of the previous year in which Jones had taken a majority decision over Tarver with a performance that can only have been described as lackluster in comparison to previous days at the office. Jones by this time in his career had already transcended boxing, he was dabbling in both music and Hollywood blockbuster movies, in the ring he was portraying an aura of invincibility that the sport had rarely seen before. It was with no surprise that when Tarver’s perfectly timed left hook separated Jones from his senses and halted proceedings at 1:41 of the second round that the boxing world was left shocked, stunned and silenced. It was on this night that phase two of the Roy Jones Junior career began. Unfortunately it was a phase where diminished speed and reflexes as well as a reduced punch resistance would finally see him fighting as a shadow of his former self and eventually see him spiral further and further down the mythical list of all time “pound for pound” greats.

After challenging, dominating and then beating John “The Quiet Man” Ruiz for the World Boxing Association heavyweight championship of the world phase two could have been oh so different. In a “Sliding Doors” scenario had the only man in history to begin his career below the 154lbs middleweight limit and then proceed to win a portion of the world heavyweight title decided to stay at heavyweight, he had a platform to be remembered as perhaps the greatest pugilist of all time. A first defence of his WBA heavyweight title against Evander Holyfield, (a winnable fight considering Holyfield’s knockout loss to James Toney later that year) swiftly followed by victory in a super-fight with an aged Mike Tyson, who could have argued with one’s right to make a case for Roy Jones Junior to take his place right up top alongside Ray Robinson.

If time teaches us anything in this sport it is that careers are short and opportunities are few and far between, one bad career choice may end up destroying a legacy. Those blessed with the god given talent to achieve greatness must grab it and seize their moment before it is too late. Anthony Joshua, Deontay Wilder and Tyson Fury should take heed. There must be no regrets in the quest for immortality.

Crawford/Khan: What we really learned

Crawford/Khan – ‘The Matchmaking Blunder of the Decade’