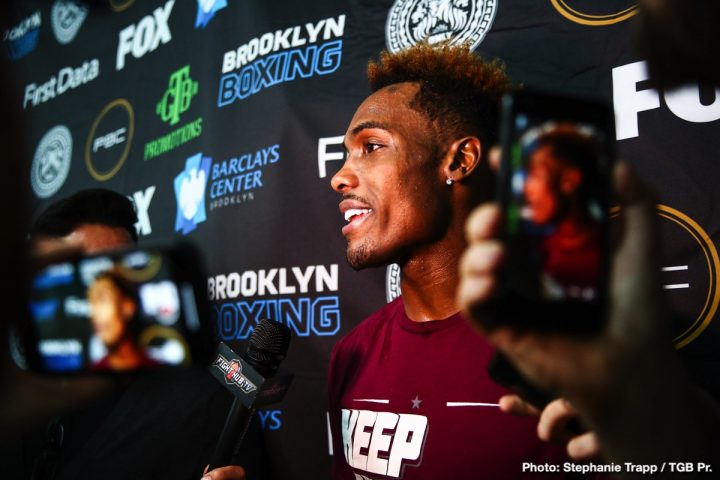 By Mark Eisner: The exciting talent Jermall Charlo (28-0, 21 KOs) will be back inside the ring defending his WBC interim middleweight title this summer against the highly rated Brandon Adams (21-2, 13 KOs) in the main event LIVE on Showtime on June 29 at the NRG Arena, in Houston, Texas. In the co-feature bout, thrilling unbeaten interim WBA light heavyweight champion Marcus Browne will be defending his title against former WBC 175 lb champion Jean Pascal (33-6-1, 20 KOs) in a scheduled 10 round fight.

This card will be packing a one-two punch on the 29th of June on Showtime.

Although many boxing fans had given up on the 36-year-old Pascal after his two defeats at the hands of Sergey Kovalev in 2015 and 2016, he’s breathed new life in his career with recent wins over Ahmed Elbiali and Steve Bosse. While Pascal did lose his last fight against WBA World light heavyweight champion Dmitry Bivol by a 12 round last year on November 24, he gave the unbeaten Russian a lot of problems in the fight with his hand speed, punching power, and his boxing ability. Bivol struggled at times in winning by the scores 119-109, 117-111 and 119-109. That was easily the hardest fight of the 28-year-old Bivol’s five year pro career.

For Jermall, this is a step down for him from his last fight against 36-year-old Russian southpaw Matt Korobov (28-2, 14 KOs), who he beat by a 12 round unanimous decision on December 22 at the Barclays Center in Brooklyn, New York. Charlo, 28, had a lot of difficulties in beating Korobov by a fight closer than the scores handed down by the judges. They scored it 119-109, 117-111 and 119-109. Many boxing fans felt that Korovbov had done enough to just barely nick it, and if not win it, be given a draw. It was kind of surprising to see the judges not only give Jermall the victory, but give it to him by wide scores instead of having it a close fight the way the boxing public saw the contest. The scores were so far off from how people saw the fight, it made Jermall look like he was given preferential treatment by the judges.

The major hiccup was that the Charlo vs. Korobov match wasn’t supposed to be a close affair at all. Charlo was expected to win with ease against Korobov, who was brought in as a last minute replacement for former world title challenger Willie Monroe Jr. after he tested positive for a banned substance. Given Korobov’s advanced age at 36, and the fact that he was being brought in as a replacement at the last minute, he wasn’t supposed to give Jermall problems. Some think that the judges already had their minds made in thinking that this fight was going to be a walk in the part for the young Charlo, but it turned out to be the opposite of that. He struggled from start to finish with the southpaw stance of the highly technical Korobov. The Russian fighter looked like the more skilled of the two, and he was catching Charlo with left hands the entire fight without him being able to stop the shots.

In hindsight, it would have been better for Charlo’s management Premier Boxing Champions to put him back in with Korobov so that he could show the fans that his poor performance against him last December was just a fluke thing and not indicative of how true ability. Charlo lost a lot of cache with fans from that performance, and it looks bad that he’s moving on to face an arguably weaker opponent in Brandon Adam. A rematch with Korobov would have been far preferable than fighting the 29-year-old Adams, who has suffered losses in the past to John Thompson and Willie Monroe Jr. We don’t know what the mindset is for PBC in matching Charlo against Adams rather than putting him back in with Korobov. Perhaps they felt that Korobov was all wrong for Charlo, and they didn’t want to take a chance of matching him back up with him and risk seeing him possibly get beat or be given another controversial victory that the boxing world didn’t agree with.

Adams is a fine contender level fighter. Since being knocked out in the second round by John Thompson in May 2015, Adams has won his last four fights in beating Tyrone Brunson, Ievgen Khytrov, Eric Walker and Shane Mosley Jr. Those are all obviously lower level fighters and not world class guys. Adams does well against those kind of guys, but he falls apart when he faces fringe level opposition. Adams was recently under consideration as opponent for former IBF/WBA/WBC middleweight champion Gennady Golovkin’s next fight on June 8 on DAZN. Adams had the choice of facing Golovkin or Charlo, and he went with the latter. It’s unknown whether the money was better for the Charlo fight or if he made the choice based on him believing he matches up better against him than he would with GGG. Adams sparred with Golovkin a while ago, and he was impressed with his punching power.

The World Boxing Council tried ordering GGG to face Jermall in an eliminator with the winner to challenge WBC middleweight champion Saul Canelo Alvarez. That didn’t go over well with Golovkin (38-1-1, 34 KOs), who chose to face little known Steve Rolls (19-0, 10 KOs) for his next fight on June 8 on DAZN at Madison Square Garden in New York.

Marcus Browne defeated former two division world champion Badou Jack by a 12 round unanimous decision earlier this year on January 19th in an exciting fight at the MGM Grand in Las Vegas, Nevada. Jack, 35, got off to a bad start, and ended up suffering a deep cut from a clash of heads midway through the contest. From there, it was all downhill for Badou, as he had a difficult time dealing with Browne’s speed and power due to his vision being partially clouded by a sea of blood that constantly dripped from his cut from his forehead. With the victory, Browne captured the vacant WBC Diamond and interim WBA light heavyweight titles. Browne ended up winning the fight by the scores 119-108, 117-110 and 116-111.

Overall, PBC is putting on an excellent card on June 29th. While some boxing fans might gripe that these two fights are mismatches on paper, you can’t blame PBC for putting these fights together. Both guys, Charlo and Browne, are coming off of difficult fights, and they need to take a step back instead of getting back into the fight to take on one of the lion’s in the division. Charlo and Browne will soon be fighting for world titles, and they’ll have to prove whether they can cut it against the best. Browne arguably has a better chance of winning a world title against Bivol than Charlo does against Canelo. But neither of them will be favored.


« Khan to fight in Oct. or Nov., possibly against Brook

Luke Campbell vs. Devin Haney in the works for July 27 on DAZN »