Luke Campbell vs. Devin Haney in the works for July 27 on DAZN 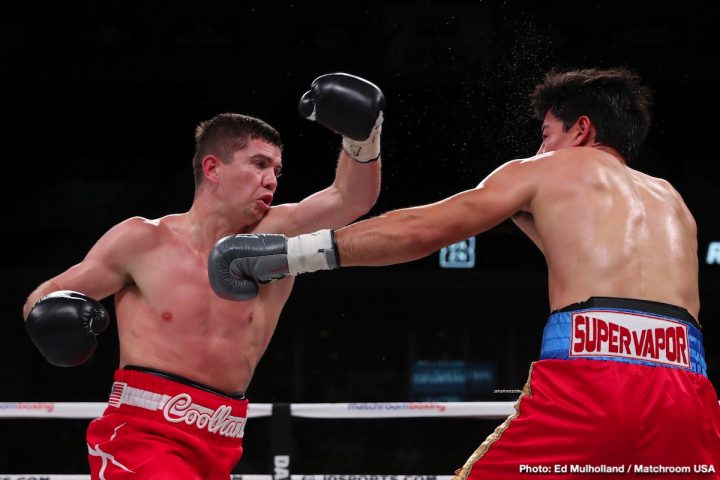 By Scott Gilfoid: Matchroom promoter Eddie Hearn has an agreement between #1 WBC Luke Campbell (20-2, 16 KOs) and #3 WBC Devin Haney (21-0, 13 KOs) for the two of them to face each other for the now vacant WBC lightweight title this summer on July 27 on DAZN. However, the fight still needs to be approved by the World Boxing Council before it’s a done deal.

Hearn is looking to swiftly move two of his own chess pieces, Campbell and the 20-year-old Haney, into the slot to fight for Mikey Garcia’s recently vacated WBC lightweight strap. Garcia, 31, would have been forced to defend against mandatory Campbell, but he decided he wasn’t up to coming back down from welterweight after his unsuccessful challenge of IBC 147 lb champion Errol Spence Jr. (25-0, 21 KOs) two months ago on March 16 in Arlington, Texas. Mikey moved up in weight, chasing both greatness and a nice payday against Spence, but it didn’t go well for him. Mikey was too small, too weak and too limited to handle the size, power and boxing skills of the Texas native.

Whether the WBC agrees to let the Campbell-Haney fight for their WBC lightweight strap is unclear. Campbell is going to be fighting for the vacant WBC strap no matter what. The question is will the WBC allow Hearn to match Campbell against Haney or will they insist that #2 WBC Zaur Abdullaev (17-0, 12 KOs) be the guy that Luke faces instead. If that’s the situation, then it could be bad for Campbell, because the 25-year-old Abdullaev can punch, and he’s arguably further along with his career than the young 20-year-old Haney. Moreover, Abdullaev, 5’9″, is the same height as Campbell, so there won’t be the normal height advantage that he’s accustomed to having in his fights. Campbell has been getting over on his shorter opponents since he turned pro in 2013. Campbell is pretty much ALWAYS the taller fighter by a large margin in his fights. When he’s not much bigger than his opponents, Campbell struggles, as we saw in his past defeats against Jorge Linares and Yvan Mendy.

The wily Hearn recently signed Haney to a contract with his Matchroom Boxing USA promotional stable, and he’s now looking to take advantage of that signing by putting him in with the 31-year-old southpaw Campbell for the vacant WBC 135 lb title. It’s clearly a huge step up in class for Haney to be thrown in the deep water with 2012 Olympic gold medalist Campbell at this early stage of his pro career, but Hearn thinks he’s capable of handing himself.

Campbell has won his last three fights in beating Adrian Yung, Yvan Mendy and Troy James. Campbell was beaten by Linares by a 12 round split decision in September 2017. That was a fight in which Campbell, Hearn and many of his boxing fans felt that he deserved the victory. But neutral fans saw it as a case of Linares winning the first four rounds, and then giving Campbell the middle rounds, and then coming on at the end to sweep the championship rounds.

Campbell had a great amateur background in winning a gold medal in the 2012 Olympics, and then he’s tangled with some excellent fighters since turning pro in 2013. Campbell has been in with these fighters: Jorge Linares, Yvan Mendy, Darleys Perez, Jairo Lopez, Derry Mathews, Gary Sykes, and Daniel Eduardo Brizuela. In contrast, Haney has faced Xolisani Ndongeni, Juan Carlos Burgos and Mason Menard. The way that Haney handled himself in winning his last three fights, you would have to give him an excellent chance of beating the royal brakes off Campbell to capture the vacant WBC lightweight title on July 27.

The only question is WHERE will the Campbell vs. Haney fight take place? Will be in the United States or in the UK. If it’s in the UK, then you’d have to favor Campbell by a decision if Haney doesn’t score a knockout. Haney would be the visiting fighter, and he would likely be facing the 31-year-old Campbell in front of a pro-Campbell crowd in London, England. Haney is an excellent fighter, but he’s not a knockout puncher as of yet. As such, for Haney to beat the southpaw Campbell, he’ll likely need to go the full 12 round distance. You’d like to think the judges will score the fight accurately, but the crowd noise might sway the judges and cause them to give the fight to the home fighter, and that would be Campbell. Haney isn’t a big enough name in the United States yet for a fight between him and Campbell to to draw a large crowd. That’s why a match between Haney and Campbell would almost surely take place in the UK.

Haney is scheduled to fight Antonio Moran (24-3, 16 KOs) in a 10 round fight this month on May 25 on the undercard of the heavyweight clash between Oleksandr Usyk vs. Carlos Takam on DAZN at the MGM National Harbor, in Oxon Hill, Maryland. Moran, 26, is an excellent fighter. In some respects, he might even be better than Campbell. Hearn putting Haney in with a VERY good talent in Moran, who came close to defeating former two division world champion Jose Pedraza (25-2, 12 KOs) last June at the MGM Grand in Las Vegas, Nevada.

Pedraza beat Moran by a narrow 10 round unanimous decision by the scores 96-94, 96-94 and 96-94. Moran gave Pedraza a tougher time than WBO World lightweight champion Raymundo Beltran did last August. Pedraza beat Beltran by a one-sided 12 round unanimous decision by the scores 115-112, 117-110, 117-110. If Haney can handle Moran without any problems this month, then he’ll be in a good position to deal Campbell his third career defeat on July 27.

Boxing » News » Luke Campbell vs. Devin Haney in the works for July 27 on DAZN