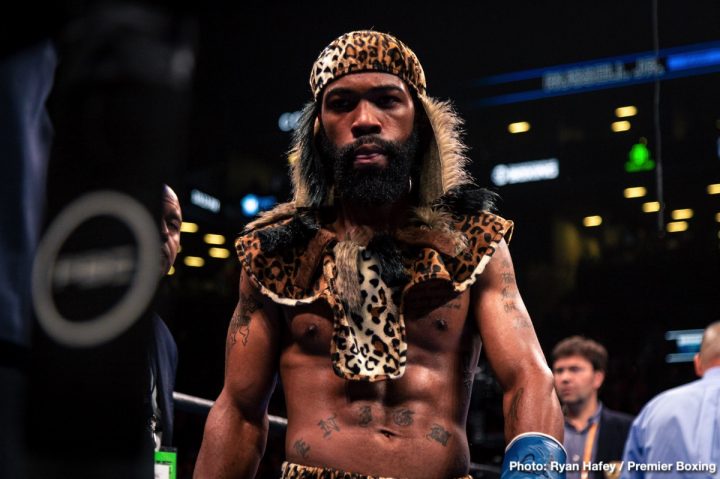 By Barry Holbrook: WBC featherweight champion Gary Russell Jr. (30-1, 18 KOs) revealed on Monday that he’s now a promotional free agent and can sign with whoever he wants. Speaking to Boxingtalk.com, the 30-year-old Russell Jr. says he’s no longer with Premier Boxing Champions, and he can with with another company.

Will there be a huge amount of interest in Russell Jr. by promoters?

The question is will there be a huge surge of interest from the likes of ESPN, Top Rank, DAZN and Matchroom Boxing USA for a fighter that is 30-years-old and that only compete once a year. How much growth can a promoter get with a fighter that only fights once a year, often against mediocre opposition. For example, last Saturday, Russell Jr. fought Kiko Martinez (39-9-2 28 KOs), a fighter that a lot of boxing fans see as a completely over-the-hill fighter at 33, and who had lost four times in the last five years. If Russell Jr. is only going to fight once a year, why fight Martinez? Why not make it count by taking on someone younger and arguably more talented like Tugstsogt Nyambayar, Scott Quigg, Carl Frampton, Jessie Magdaleno, Shakur Stevenson, Eduardo Ramirez, Oscar Valdez or Josh Warrington?

“I’m not with PBC…I’m not locked in to any manager, promoter, or any specific network. I’m 100% a free agent,” Russell Jr. said to Boxingtalk.com.

It won’t be any good if Russell Jr. moves up to super featherweight, and continues to fight once a year against no names or fighters that are perceived to be shot fighters. Since winning the World Boxing Council 126 lb title four years ago, Russell Jr. has beaten the following fighters: Patrick Hyland, Oscar Escandon, Joseph ‘Jo Jo’ Diaz Jr. and Kiko Martinez. Diaz Jr. is a good fighter, but the rest of those guys aren’t. There’s no excuse for Russell Jr. fighting just once a year. The guy should have been fighting two to three times per year since 2015, because he’d have a lot more to show on his resume. Russell’s popularity would have a lot further than where it is right now if he’d been staying active and fighting a better class of fighter.