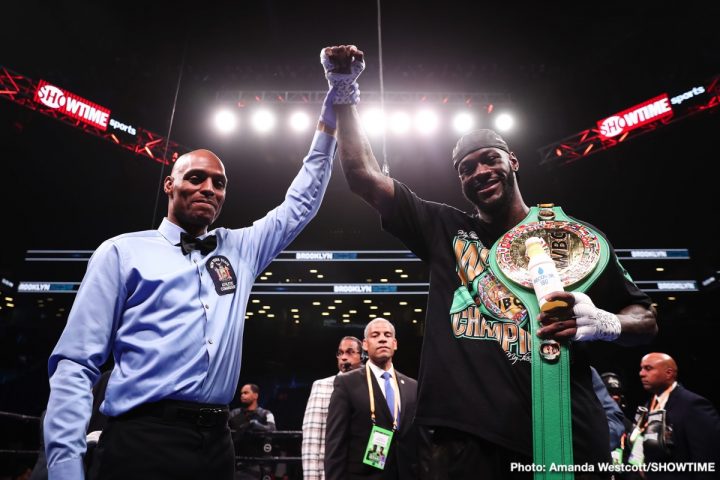 By Dan Ambrose: WBC heavyweight champion Deontay Wilder says he’s going to make sure that his fight with IBF/WBA/WBO champion Anthony Joshua (22-0, 21 KOs) doesn’t wind up like the Lennox Lewis vs. Riddick Bowe match that never took place between these two former world champions during their careers.

Wilder looked great last weekend in dispatching his nemesis Dominic Breazeale (20-2, 18 KOs) in the second round at the Barclays Center in Brooklyn, New York. It was the perfect victory to lead into a unification fight with Joshua. The fight likely won’t happen just yet though, even though Joshua and his promoter Eddie Hearn of Matchroom Sport are eager to make it happen.

The performance that Wilder put in was a vast improvement over his last one against lineal heavyweight champion Tyson Fury last December. Fury had Wilder missing all night long with his big home run power shots. Breazeale had no such luck. Wilder was hitting him everything he he threw, and he quickly took him out with a beautiful right hand to the head.

“I don’t want this to be like a Lennox [Lewis] and [Riddick] Bowe situation,” Wilder said. “I definitely don’t. The heavyweight division is so lit right now. It’s on fire right now. I think it’s our obligation to do this and give the fans what they want. We’ve tried and tried, but it’s gonna come back around again and I think the next time it comes around, the discussions that deal with me and Joshua, I think something’s gonna get done. Like I tell people, I just want them to have patience and just let us have our moments and let us do what we do.”

“Not at all, I promise you that,” Wilder said about a potential fight with Joshua ending up like the Bowe vs. Lewis fight that never happened.

You never know what will happen with the Joshua vs. Wilder fight. It could happen if they get it negotiated, but it’s not a good sign that Joshua’s promoter Eddie Hearn has failed all these years to get the fight negotiated. He’s been low-balling Wilder with offers that have been too low for him to agree to. It’s easy for Wilder to say that the fight with Joshua will get done, but he can’t say that for sure. If Hearn continues to offer Wilder less than what he wants, then it’s safe to say the fight won’t get done no matter what kind of assurances Deontay is giving the boxing fans. Wilder may not realize it, but the worst thing he could is that the fight will get made. Hearn might be listening to that, and thinking to himself, ‘I can continue to offer him a 60-40 split for the Joshua fight, and he’ll agree to it eventually.’

“I don’t know what’s next, to be honest,” Wilder said at the post-fight news conference after destroying the hapless Breazeale. “There’s so many different things going on. I just want the best fights possible. I’ve tried to prove myself for a very long time. We’ve tried many a times to make the best fights possible for the fans. I’ve lowered my standards to make these fights happen [with Ortiz and Fury]. I’ve took high risk with low rewards to make fights happen.”

If Wilder considers fights with Luis Ortiz and Tyson Fury as him lowering his standards, then he might have to get used to it, because that’s about there is in the division. Once you get passed Joshua, the only guys left are Ortiz, Fury, Dillian Whyte, Adam Kownacki, Kubrat Pulev and Joseph Parker. There are no big stars.

It’s believed that Wilder will wind up facing Ortiz next in a rematch. Their fight last year in March was an exciting one briefly in the seventh round when Ortiz had Wilder hurt. The first six rounds were dull and one-sided. Ortiz had Wilder hurt in the seventh, but he couldn’t put him away. The way way Wilder looked last Saturday against Breazeale, Ortiz won’t last long in the rematch. Wilder won’t be as cautious with him as he was in the first fight, and that’s bad news for for the 40-year-old talented Cuban, because he’s pretty slow and easy to hit.