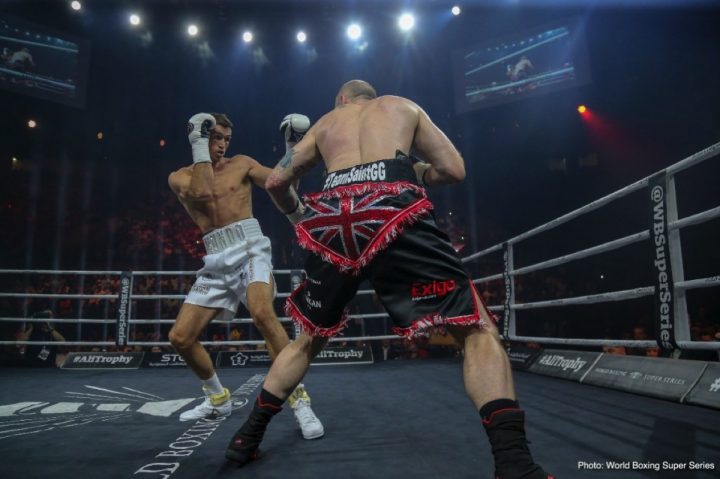 By Tim Royner: Callum Smith says he wants to fight Saul Canelo Alvarez in the UK after he defends his WBA Super World super middleweight title against #13 WBA Hassan N’Dam next month on June 1 on the undercard of Anthony Joshua vs. Andy Ruiz Jr. at Madison Square Garden in New York.

Canelo (52-1-2, 35 KOs) and his promoters at Golden Boy Promotions have expressed interest in wanting to make the fight with the unbeaten Callum Smith (25-0, 18 KOs). It’s now a matter of whether DAZN would prefer to put that fight on for September or a rematch between Alvarez and former middleweight champion Gennady Golovkin, who is better known in the United States than the 28-year-old Smith.

It took Golovkin seven years of continuous fighting in the United States for him to sour to the level of popularity that he currently is at in the U.S. For Callum, this is his first fight in the U.S, and he’s picked a beatable opponent in N’Dam, who won’t resonate in the U.S. It’s not an ideal situation for Callum to gain much popularity from the fight, because N’Dam isn’t a household name, and the U.S hardcore fans know of him from his losses to David Lemieux, Peter Quillin and Ryota Murata.

Smith’s promoter Eddie Hearn didn’t appear to put much effort into finding him someone that would impress the American hardcore boxing fans. Hearn doesn’t realize that U.S fans haven’t forgotten how easily N’Dam was beaten by Murata, Lemieux and Quillin in the past. N’Dam was being knocked around the ring by those guys in one-sided fights. Hearn should have talked to one of the experienced U.S promoters like Bob Arum of Top Rank before he setup the fight between Callum and N’Dam. Arum has a lot of good fighters in his Top Rank stable. Perhaps he would have let one of them fight Smith. Fans would have loved to have seen Callum take on Artur Beterbiev, Jesse Hart or Gilberto ‘Zurdo’ Ramirez.

“Canelo is a superstar in boxing and he mentioned my name after his fight,” Smith said to skysports.com. “I’m sure our teams can sit down and, if that fight can be made, it’s something I would jump at. I’ll take care of business on June 1 – I’ve got a tough fight with N’Dam – and providing I come through with no injuries then there are a lot of big names [for me to fight next].”

Since the Smith-N’Dam fight is already being viewed as a mismatch by knowledgable boxing fan, it means that the fight will need to have drama involved in it for Smith to come out of it with enough popularity for the U.S fans to want to see him fight Canelo rather than the more accomplished, and better known Golovkin. The obvious problem that Smith has right off the bat is he’s facing an old fringe level fighter in N’Dam.

For some reason, Smith’s promoter Eddie Hearn of Matchroom Boxing selected N’Dam from the bottom of the the WBA’s rankings instead of selecting one of the talented fighters at 168. Hearn might not have been able to work a deal with a good super middleweight like David Benavidez. It’s possible that Hearn wanted to put Smith in with someone that would make him look good, and not ruin his chances, such as they are, for him to get a fight with Canelo. Benavidez is someone that would have given Smith a serious run for his money, and might even beat him. For that reason alone, it’s not surprising that Hearn didn’t sign Benavidez to fight Smith for June 1. But the problem with Hearn picking N’Dam as Smith’s opponent is it won’t impress American boxing fans no matter how good Callum looks in winning this fight. After all, N’Dam was just beaten by Ryota Murata two fights ago by a seventh round stoppage in October 2017, and his only win since then was against 37-year-old Martin Murray, who is no longer even a ranked contender at this point in his career. Hearn is a clever promoter, who tends to match his fighters safely in fights that are often sure thing wins for them. Hearn might have been thinking that Golden Boy Promotions wouldn’t mind that Callum Smith fought a bottom dweller fringe level contender in N’Dam before being selected to fight Canelo Alvarez.

Callum Smith’s trainer Joe Gallagher is hoping that Canelo will want to travel to Liverpool, England to make a fight in Anfield. Gallagher believes that would be a huge match. Canelo is with DAZN now, and it wouldn’t be ideal for him to fight in the UK due to the time difference between there and the U.S. If Canelo fights Callum in Liverpool, it would mean that the fight would be shown in the U.S on DAZN in the early afternoon, which means fewer boxing fans would watch it. That means fewer subscribers. Moreover, the Callum isn’t a big name, so this would be another Canelo vs. Rocky Fielding type of fight in terms of interest from American fans. It might not be a mismatch like the Canelo-Fielding fight turned out to be, but the interest in the fight from casual fans would likely be similar. Callum looks like a good fighter, but his resume is thin as far as quality wins go. He only has a victory over a past his best George Groves, who was at the end of his career when he beat him.

“I just think it ticks all the boxes. We would welcome ‘Canelo’ Alvarez, if he wants to come over to the UK and fight. Yes, Callum Smith is the man to accommodate him.,” Callum’s trainer Joe Gallagher said to skysports.com.