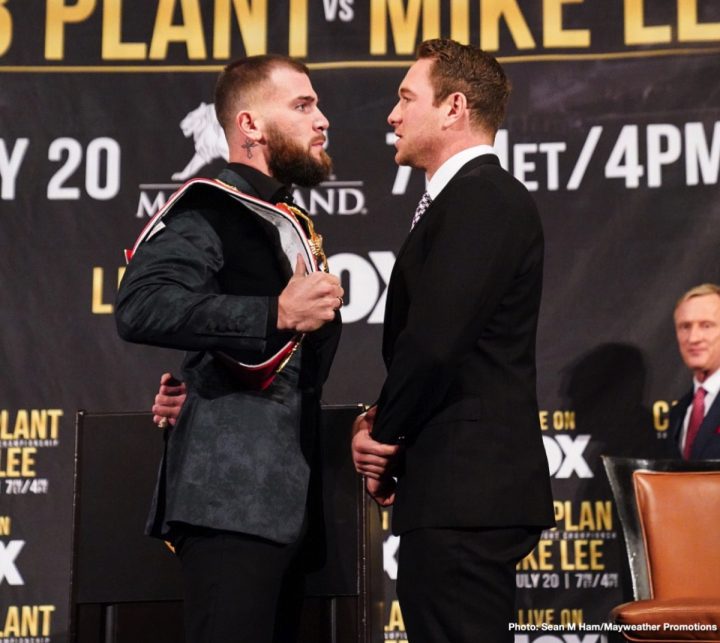 By Kenneth Friedman: IBF super middleweight champion Caleb Plant isn’t too concerned with winning his next fight against Mike Lee on July 20 on Fox at the MGM Grand Garden Arena in Las Vegas, Nevada. Plant vs. Lee will be shown on Fox at 7:00 p.m. ET on July 20.

Plant (18-0, 10 KOs) and fringe light heavyweight contender #15 IBF Lee (21-0, 11 KOs) might as well have a couple of plants this week, as they’ve been largely ignored by the media during the two new conference for the Manny Pacquiao vs. Keith Thurman.

Plant was sporting a long beard during the two press tour stops in New York and Los Angeles. It’s unclear whether he’ll be allowed to fight with the beard or not. It would be messy for Lee if he has to deal with having Plant’s beard in his face during the fight.

There’s just not a lot of interest from fans in the Plant vs. Lee fight for obvious reasons. The management for Plant picked the wrong guy to attract interest, as the 31-year-old Lee doesn’t fight at super middleweight. He’s a bottom dweller from the 175-pound division, and he’s not particularly with his career in the last year. Lee fought once in 2018 in beating an obscure fighter. Lee hasn’t never faced anyone of note, which makes it kind of hard to understand why he as selected for Plant to fight.

In hindsight, it was a mistake for Plant to be matched up against a no name, and then the second mistake was to have him fight on the Pacquiao-Thurman card. If you’re going to fight on this card, you need to be facing quality opposition, and that’s not happening with Plant. The odd face off for the first news tour this week was strange to say the least. The two never did have a face off for the first stop of the two-city press tour.

Finally, in Los Angeles, the two fighters faced off, but the fans and media weren’t too excited about their time on the stage. There was no energy between them. It’s not a fight that boxing fans want to see. If the promoters for Plant are looking to have him milk his IBF title so that he can hold onto it for as long as possible, then they’ve done a good job of selecting Lee from the bottom of the IBF’s rankings. However, it’s not exactly fair to the top 15 contenders in the IBF’s rankings at 168 for Plant’s opponent to have been selected from the 175 lb weight class rather than at super middleweight. Hopefully, this doesn’t become a habit. The Moving forward, the International Boxing Federation needs to make sure Plant is defending against contenders from the super middleweight division.

“Mike Lee is in uncharted territory. I’m curious on how he plans on beating me,” Plant said. “Does he plan on roughing me up and trying to knock me out like my last opponent? Can he do that better than Jose Uzcategui? Is he going to try to outbox me with his hand and foot speed? Because there’s no person from 160 to 175 who could do that.”

Lee has very little chance of winning this fight, but that’s obviously the entire idea of why he was selected by Plant’s management to face him. They picked a guy with no experience against world class opposition in 31-ear-old Lee, and they selected him from the bottom of the IBF’s rankings at #15. What does Plant expect? If Plant can’t win this fight, then doesn’t say much about him. What Plant should be doing is complaining to his management for selecting Mike Lee as his opponent in the first place. Plant should have told his team to find him a good opponent or at least someone that the casual boxing fans in the U.S have heard of. Lee isn’t a household name. Some hardcore boxing fans know of him, but he’s not that is mentioned frequently when fans are talking about the elite fighters at 175, and he’s never mentioned when talking about the top 168-pound fighters, because he doesn’t fight in that weight class.

This will be Plant’s first defense of his IBF super middleweight belt that he won last January in defeating champion Jose Uzcategui by a 12 round unanimous decision. A lot of fans thought the 26-year-old Plant would lose to Uzctegui, as he’s not much of a puncher. He’s more of a Sergio Mora type of finesse fighter, who wins by being crafty rather than out-slugging his opponents. Uzcategui was flawed enough for Plant to out-box him, and drop him twice. It was a good win for Plant, but wasn’t the type of performance that suggested that he would be able to beat the top level guys at 168 like David Benavidez, Callum Smith or Saul Canelo Alvarez. Those are the fighters to beat in the super middleweight division. Uzcategui was arguably just a belt holder. Plant took advantage of that by beating him. Uzategui had already been soundly beaten in the past by Matt Korobov Uzcategui captured the IBF 168-pound title by defeating Andre Dirrell in March of last year by stopping him in the eighth round after the Flint, Michigan native suddenly quit.

“I’m the whole package. I have speed, I have footwork, I have power, I have the heart and the will to win,” Plant said. “Until you find someone else who’s all that, I’m going to keep having my hand raised.”

Plant is getting a little carried away in talking about himself. He’s not the whole package. He’s got decent boxing skills, he’s far from great, and he’s not a big puncher. If Plant’s management puts him in with someone good like Benavidez, Billy Joe Saunders, Canelo or Callum Smith, we’ll likely see him brought down to earth. With that said, Plant is a good fighter, but he’s more of a #5 or #6 type talent in the super middleweight division in this writer’s opinion. You’d have to favor these fighters to beat Plant if were to face them: Benavidez, Canelo, Callum Smith, Saunders and Chris Eubank Jr. Plant is a good fighter, but just not one of the super talents in the 168-pound division; hence he’s being matched a bottom fringe contender in Mike Lee from the 175-pound division. That match-up tells you all you need to know about Plant.