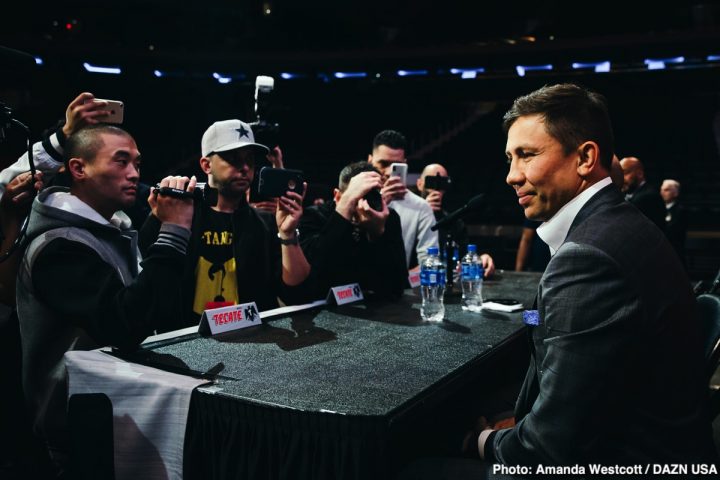 By Sean Jones: Promoter Tom Loeffler says he’s hoping Gennady Golovkin does his part next month against Steve Rolls so that he can look to setup a third fight against Saul Canelo Alvarez for September. That’s the “priority” fight for GGG, say Loeffler. If that fight can’t get made, Loeffler isn’t saying who the backup plan will be for Golovkin, but he does like the idea of matching him against unbeaten interim WBC middleweight champion Jermall Charlo.

That’s still an unlikely fight though for Golovkin due to the two fighters competing on different networks. Golovkin (38-1-1, 34 KOs) is with DAZN, whereas the unbeaten Charlo (28-0, 21 KOs) is with Showtime.

Golovkin will be fighting the unbeaten 35-year-old Canadian Rolls (19-0, 10 KOs) next month on June 8 on DAZN at Madison Square Garden in New York. This will be GGG’s first fight under new trainer Johnathon Banks, who replaces Golovkin’s former trainer Abel Sanchez in his corner. Loeffler is interested in seeing what improvements, if any, that Banks can make in the 37-year-old Golovkin’s game. With Sanchez, Golovkin had reached a sticking point in which he wasn’t getting better. You can make an argument that Golovkin had become predictable in his last couple of fights. Whether that was Sanchez’s fault or not is anyone’s guess. Sanchez would know obviously whether Golovkin was following the instructions he was giving him in the corner. Banks says he wants Golovkin to throw more punches, because he waits too long before letting his hands go. Banks wants Golovkin to create more pressure for his opponents by increase his punch volume. If Golovkin had thrown 50% more punch in both of his fights with Canelo, it would have been interesting to see how the Mexican would have reacted to all the shots that Golovkin would have been throwing at him. Canelo has good defense, but he would have still been hit a lot of Golovkin had thrown more shots.

“I think the fans will be in for a great fight next with the return of GGG to MSG,” Loeffler said to Fighthype about Golovkin’s June 8th show against Steve Rolls. “Canelo did his part. He beat Danny Jacobs. Gennady has to do his part by beating Steve Rolls. If GGG is successful against Steve Rolls, then that opens the door for the third fight. I’ll sit down with DAZN, and sit down with Oscar [De La Hoya]. We’ll see if we can make the third fight after that. That’s a fight that the fans want. That’s a fight that the media wants. It’s the two best middleweights in the world fighting each other for a third time. Not only the two best middleweights, and the two most marketable middleweights, two of the most marketable fighters in the sport of boxing. The second fight was better than the first fight. If they get in the ring for a third time, I think it’ll be even more exciting. GGG can’t look past Steve Rolls. If he doesn’t win, then all that talk is out the window,” Loeffler said.

Golovkin needs to beat Rolls on June 8th, and look good in doing so. Since the fight is considered a mismatch in the eyes of the boxing public, GGG is in a no win situation pretty much. The only way Golovkin can impress the fans is if he goes out and stops Rolls in the first or second round. Even then, the fan are going to dump on him for fighting a near novice fighter with no experience whatsoever against world class opposition during his 10-year pro career. Against that type of a fighter, Golovkin must knock him out quickly to impress the fans. Anything other than that will be considered a disappointment to a lot of people that follow the sport. That’s why it was a mistak for GGG to take this low level of opponent. He should have looked to fight someone ranked highly in the middleweight or super middleweight division like Matt Korobov or Sergiy Derevyachenko.

“The middleweight division is so deep right now. You’ve got to put Danny Jacobs up there,” Loeffler said. “[Demetrius] Andrade is there, and [Jermall] Charlo is out there. So, I think you’ve got the depth in the middleweight division. Jarrett Hurd might move up to middleweight. So I think there’s going to be a lot of good middleweight fights, especially if a third fight happens between GGG and Canelo. They’re so evenly matched. I would’t be surprised if a fourth fight happens. I think the [Jermall] Charlo fight is a great match-up for GGG. Charlo is coming up. He’s great on social media. He’s definitely a great self promoter. If GGG is successful against Steve Rolls, naturally the priority would be to get the third fight with Canelo. A fight with Charlo is a great fight. If there’s a way to make it, I’m sure we’ll figure out a way to make it,” Loeffler said.

It’s possible that a fourth fight between Canelo and GGG happen at some point in the future, but not if Golovkin loses the third fight convincingly. Another loss for Gennady against Canelo will make it less interesting for boxing fans in seeing those two fight each other a fourth time. As it is, a lot of fans aren’t that excited at seeing a third fight between Canelo and Golovkin. The fans are split with half of them believing that the judges will rob Golovkin no matter how many times he fights Canelo, and the other half feeling that Alvarez already beat GGG in the rematch. If Canelo beats Golovkin in the potential third fight in September, that would be enough to close the door on the rivalry for good unless it’s another controversial win for Alvarez.

“With the new trainer [Johnathon Banks], we’re fighting a an undefeated, hungry Steve Rolls,” Loeffler said. “It’ll be interesting to see. He’s [Golovkin] had some tie off. It’ll be interesting to see how he looks in the ring. Johnathon filled some impossible shoes when he took over for the unfortunate passing of Emanuel Steward when he started training with Wladimir Klitschko. Johnathon is used to being in big fights on the big stage. GGG said that’s a guy I want to work with. He had seen Johnathon work with Wladimir Klitschko. So far, the transition is going really well. Abel Sanchez played an important roll in GGG’s career. Now the pressure is on Johathon to make him even better than GGG was before. That’s what the fans want to see. With GGG being off for a while, it’s going to be intriguing to see not only how he looks, but how he does with his new trainer. The scores in the last fight with Canelo effected him in terms of how he felt he won the fight. We felt he won the fight. The majority of the fans and the ringside media thought he won the fight. So, he didn’t feel like he lost the fight with how he performed in the ring. But he was disappointed with the two judges that voted for Canelo in the 12th round, which a majority of the people felt GGG won. That’s a big reason why he took some time out of the ring. Actually, with a new trainer, it’s a transition for him. I think there’s a lot of intrigue,” Loeffler said. 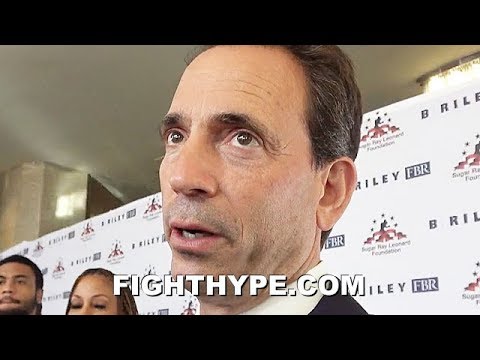 
« Tyson Fury: I Wouldn’t Let Dubois And Gorman Fight Each Other