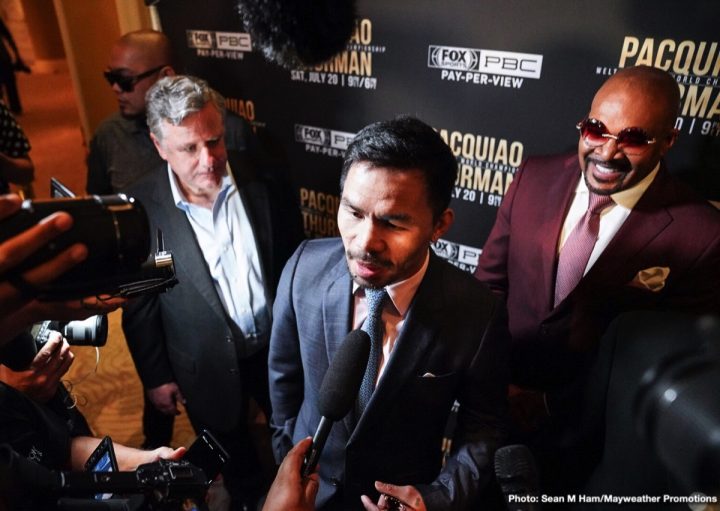 By Mark Eisner: Keith ‘One Time’ Thurman (29-0, 22 KOs) will beat WBA ‘regular’ welterweight champion Manny ‘Pac Man’ Pacquiao (61-7-2, 39 KOs) on July 20th, according to promoter Bob Arum. The Top Rank head boss Arum, who used to promote Pacquiao for many years, sees him as being too old at 40 to deal with the youth and size of the 30-year-old Thurman in their fight on Fox Sports Pay-Per-View.

Arum isn’t the only one that views Pacquiao as being too old to get the job done. Many fighters, boxing fans and members of the media think the Filipino star is too advanced in years for him to beat WBA Super World welterweight champion. Although Arum wasn’t enthralled at the performance Thurman put in last January against Josesito Lopez, he expects him to put in a better effort against Pacquiao. Arum blames Thurman’s mediocre performance on him having bee out of action for two years before the fight.

“Manny Pacquiao is 40-years-old, and when you get to that age, you’re not the same fighter as you were 30-years-old, early 30s or mid-30s,” Arum said to J Calderon Boxing Talk in discussing the Pacquiao vs. Keith Thurman fight on July 20. “Pacquiao, he fought so many fights for us [Top Rank Boxing]; he’s always been a gutty guy, but he’s not the biggest guy in the world. I think Thurman is going to benefit from the fight that he had [against Josesito Lopez on January 26]. He was off two years. He didn’t look too good with Lopez, but I think he’s much better than that. If Thurman fights the way he had been, then I don’t think Pacquiao will have much of a chance,” Arum said.

The general belief from boxing fans is if Thurman can get back to the same level that he was at when he beat Shawn Porter in 2016 and Danny Garcia in 2017, then Pacquiao is in for a harsh night on July 20. However, Thurman didn’t look anywhere near that level against Lopez. He looked close to 40% of what he used to be. Being out of any sport for two years is going to do something to an athlete. Even a non-athlete isn’t going to be able to compete at the same level if they stop an athletic activity. Thurman’s two-year layoff from the sport may have taken him beyond the point of no return to the form that he once had. That might not matter for this fight. Thurman is fighting an old, smaller fighter in 40-year-old Pacquiao. But it might matter a lot more when Thurman takes on the younger fighters like Errol Spence Jr., Danny Garcia, Shawn Porter, Yordenis Ugas and Terence Crawford.

“We don’t know if Thurman can ever recapture what he had before the two-year layoff,” Arum said.

It’s not realistic for Thurman to ever get back to where he was before his two-year layoff from the sport. Boxing great Muhammad Ali was never the same fighter after he returned from a long layoff after he chose not to be inducted into the armed forces. Floyd Mayweather Jr. wasn’t the same fighter after he returned from a two-year layoff in 2009. Although Mayweather was still very good, he wasn’t as sharp as he’d been when he wiped out Ricky Hatton in 2007. Thurman still likely will have enough for him to beat Pacquiao, but it won’t be as easy as it would have been had he not stayed out of the ring for two years. The worry for Thurman is if he continues to have aches and pains that keep him out of the ring for a year or two at a time, his career is going to quick go belly up. At this point, Thurman can’t afford anymore long layoffs without it turning him into a B-level fighter. Arum obviously suspects that Thurman might not be able to ever get back to the level that he was at during his best years. It won’t matter against Pacquiao, because Thurman is looking like a junior middleweight at this point. Thurman’s size advantage over Pacquiao will be enough for him to win the fight, but he won’t be able to depend on that being enough for him to beat the elite fighters in the 147-pound division. You’ve got to have more than just size to beat the likes of Spence and Terence Crawford.

“No,” Arum said to when asked if he feels that the Mikey Garcia vs. Danny Garcia fight is a pay-per-view worthy match-up. “It’s an interesting fight, but it certainly isn’t [PPV worthy?]. Mikey Garcia is not a welterweight. Well, maybe [Errol] Spence is so much better, but Mikey Garcia is an excellent fighter. I really don’t think he should go passed 140. Remember, he started out as a featherweight,” Arum said.

Arum was one of the many people that were critical of Mikey Garcia’s effort against Errol Spence Jr. last March. Arum thinks that Mikey didn’t even try. He was content to go the full 12 rounds. That’s why it’s an easy pick for Arum to select Danny Garcia to beat Mikey when/if the two face each other. Danny has too much size and punching power for Mikey. Danny will likely put more of an effort into knocking Mikey out than Spence did. Spence looked like he was taking it easy on Mikey much of the time by boxing him instead of walking him down to get him out of there. Danny is a different type of fighter. He won’t feel sorry for Mikey. He’ll be looking to knock him out and get rid of him so he can’t muddy the water afterwards by saying that he should have been given the win. Danny thought he deserved the victory in his fight against Thurman in March 2017. If Danny had knocked Thurman out, it would have been academic. There would have been no chances for the judges to score the fight and put their spin on the final outcome.