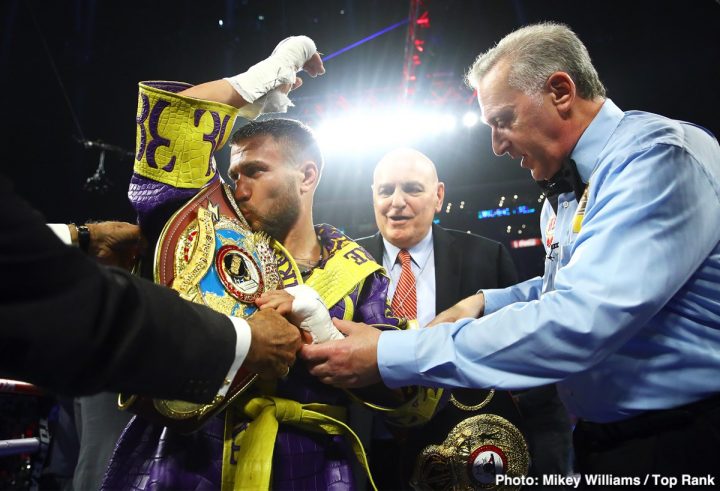 By Mark Eisner: Bob Arum revealed today that it’s officially a done that that WBA/WBO lightweight champion Vasiliy Lomachenko (13-1, 10 KOs) will be facing #1 WBC Luke Campbell (20-2, 16 KOs) for the vacant WBC lightweight title at the end of August. There still isn’t a venue for a specific date for the Lomachenko-Campbell fight, but it’s a done deal, according to Top Rank promoter Arum.

It’s too bad that Campbell won’t be fighting Devin Haney for the vacant WBC lightweight title. That’s what was supposed to have happened, but Lomachenko to the WBC to be allowed to fight for their vacant lightweight title, and they accepted it. It puts Campbell in a tough spot in which he has to face the top fighter in the 135-pound division for the vacant WBC belt. Campbell would have had a good chance of beating Haney, but you can’t say the same thing about his chances of beating Lomachenko.

“Lomachenko is going to fight Luke Campbell at the end of August,” Arum said to J Calderon Boxing. “We were able to make that deal with Eddie Hearn, who books fights with DAZN, and we had [Anthony] Crolla against Lomachenko before that. There’s a Russian guy [#2 WBC Zaur Abdullaev], who’s above him [Devin Haney] in the [World Boxing Council] ratings. Teofimo Lopez is fighting for the IBF,” Arum said.

NEWS:   Teofimo Lopez tells Top Rank: "You won't have me back"

Lomachenko vs. Campbell to take place in UK

Lomachenko vs. Campbell will take place in either London or Hull, England. Hopefully for Campbell’s sake, he could find another gear and fight at a higher level than what we saw in Anthony Crolla last April in his match against Lomachenko. Crolla was overwhelmed by the talent of Lomachenko, and quickly smashed to ribbons in being left on the canvas badly hurt in the fourth round. Lomachenko battered Crolla like a punching bag from start to finish. If Campbell can’t do any better than Crolla, then he’s going to get beaten up for sure. In theory, having the fight take place in the UK will help Campbell fight at a higher level. He’s the type of fighter that is able to raise his game considerably when he’s fighting in front of a fan-friendly crowd, but it might not matter against Lomachenko. The Ukrainian talent has the kind of ability that nullifies crowds. Campbell will need to bring more to the table for this fight than just the Adrenalin that he gets from the pro-Campbell crowd that will be showing up for the fight. Campbell will need the perfect game plan. Arum apparently doesn’t mind that the 31-year-old Lomachenko will be fighting in Campbell’s home country of the UK. As good as Lomachenko is, he could probably beat Campbell if the fight were to take place in his living room. That’s how bad of a mismatch this fight is.

Campbell is a step up for Lomachenko from Crolla

Campbell is a step up for Lomachenko from his last opponent Anthony Crolla, but not a huge one. We’ve already seen Campbell lose twice in his career to Jorge Linares and Yvan Mendy. Although Campbell believes he deserved a decision in his 12 round split decision defeat at the hands of Linares in September 2017, most boxing fans thought he lost. Linares controlled the first four and last four rounds of that fight. Lomachenko had a fairly easy time stopping Linares in the 10th round in their fight last year in May. Lomachenko was surprisingly dropped in the sixth round by Linares after he got careless an walked into a shot, but for the most part, he doesn’t him.

Arum wants to make it clear that unbeaten #4 WBC Devin Haney, who is promoted by Matchroom Boxing USA promoter Hearn, is going to have to wait his turn for a world title shot if Lomachenko beats Campbell in August to win the belt. Arum wants Lomachenko to fight in a unification match in early 2020 with all four titles being on the line. IBF champion Richard Commey (28-2, 25 KOs) will be facing the Top Rank promoted Raymundo Beltran (36-8-1, 22 KOs) on June 28. The winner of the Commey vs. Beltran fight will defend against Top Rank fighter Teofimo Lopez. From there, the winner of that fight will battle Lomachenko in the first quarter of 2020. Haney will eventually get his chance to fight for the WBC title, but it probably won’t be until at least 2021, depending on how long the WBC wants to wait before they order the mandatory.

“If there’s a mandatory for Lomachenko, if he beats Campbell in the WBC, that would be Abdullaev, then Haney would wait his turn. Lomachenko’s first goal is to try and win all four titles. So if he beats Campbell, he’ll have three titles. Then he’ll fight the IBF, either [Richard] Commey or [Ray] Beltran, who Commey is fighting, and then we’ll fight Lopez. And whoever comes out of that, will fight Lomachenko to unify all four belts. Then we’ll see whoever Lomachenko is going to fight next, because if you have all four belts, there’s mandatories in every organization. When you have a fighter that has all three or four belts, they take turns in getting in getting their mandatories,” Arum said.

As you can see, Haney isn’t going to get a title shot anytime soon unless Arum wants to let Lomachenko defend against him in a voluntary defense, which highly doubtful.

“The only 130-pounder they have is [Tevin] Farmer,” Arum said about Matchroom Boxing USA promotional stable. “Farmer is trying to make a match with Gervonta Davis. I don’t know if it’s not going to happen. Our first obligation is to take care of our fighters, and that’s what we’re going to do. If [Miguel] Berchelt wants to fight the winner of this fight [Masayuki Ito vs. Jamel Herring], and if the winner of this fight, Herring or Ito, wants to fight Berchelt, that’s the fight we would make. Why would we go and do a fight with Farmer?” Arum said in pointing out that his focus is to make fights between his Top Rank guys rather than matching them with fighters outside of his promotional stable.