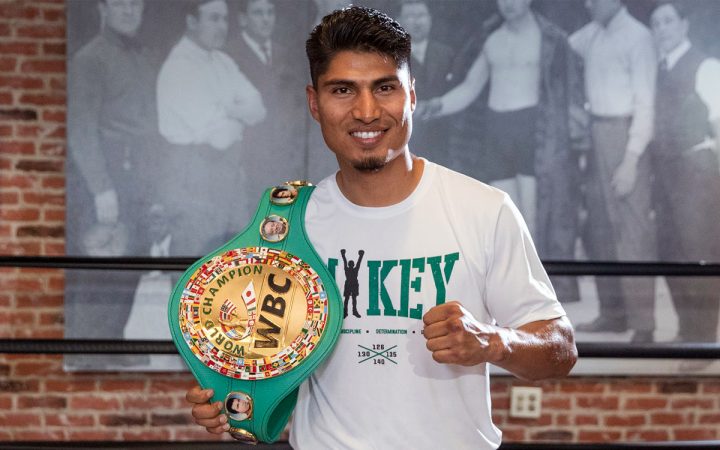 By Barry Holbrook: Mikey Garcia (39-1, 30 KOs) has now officially been made the WBC emeritus champion by the World Boxing Council after he vacated their WBC lightweight title. The emeritus status means that Garcia, 31, can come back down to lightweight and challenge for their WBC title in the future if he desires to do that.

Mikey has more lofty goals of going after a world title at welterweight. He wants the big payday fights that aren’t available at 135 right now. There is one big payday fight at lightweight, and that would be against WBA/WBO champion Vasiliy Lomachenko )13-1 10 KOs). He’s a bad style match-up for Mikey though, and it would be a tough fight for him to take after he boils down to 135 in the future. As such, it’s likely that Garcia will never face Lomachenko.

Here’s what the WBC said in a news release on Thursday:

“This designation is an honor that has been granted to a few exceptional elite champions, which allows them to resolve specific situations, which prevent them to actively defend their WBC world championship.”

In most cases, fighters don’t come back to fight for their old world titles once they become emeritus champion. Vitali Klitschko did when he returned from a four-year absence from the ring to reclaim his WBC title in beating Samuel Peter in 2008, but that was a rare instant.

“Mikey Garcia is a multiple division world champion and is a role model who represents the boxing inside and outside the ring. Mikey has been competing in 3 different categories and the WBC has decided to grant him the Emeritus designation, which will allow him to return to the lightweight division if his future decision is to compete in this weight category. The WBC is very proud of Mikey Garcia and his valiant efforts to prove his greatness inside the ring at all times. The WBC Board of Governors will review the lightweight division to order a fight for the WBC lightweight world championship involving mandatory challenger Luke Campbell in the coming days.”

There’s a lot of speculation about which contender will be facing #1 WBC Luke Campbell for the vacant WBC belt that Mikey just gave up. The possible options for Campbell’s next fight are as follows: Devin Haney, Zaur Abdullaev, Teofimo Lopez. Javier Fortuna or Lomachenko. The fans want to see Campbell square off with Lomachenko for the WBC belt, but that wouldn’t be fair to the contenders waiting for a title shot. If Lomachenko, a fighter who holds two titles already at lightweight, is able to jump ahead of the other contenders in the World Boxing Council’s rankings to fight for the vacant belt, it wouldn’t be seen as being fair. Lomachenko would be getting the fight for the vacant WBC title based on his popularity rather than his rankings.

Mikey is giving up his WBC lightweight title to move up to welterweight in search for a fifth division world title. He failed last March to rip the IBF belt from 147 lb champion Errol Spence Jr., but he doesn’t plan on giving up. Mikey will look to challenge one of the other champions. It appears that Mikey wants either WBA Super World champion Keith Thurman or WBA ‘regular’ belt holder Manny Pacquiao.