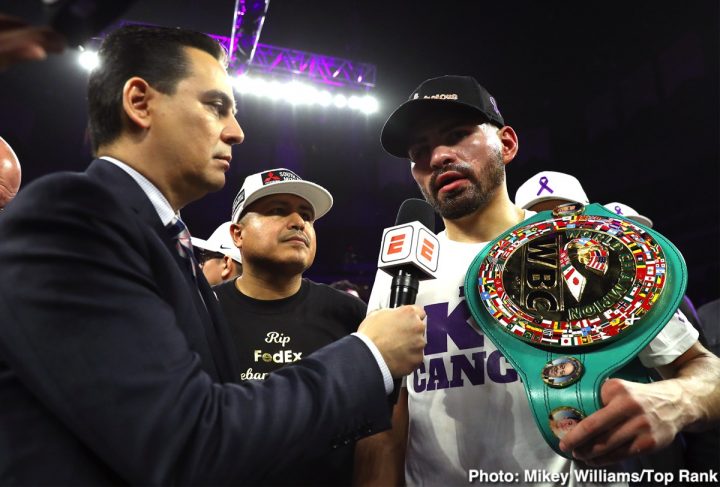 This is a title that Top Rank fighter Teofimo Lopez will be going after once he moves up in weight to the 140 lb division in early 2020. Arum clearly wants to make the Ramirez vs. Teofimo fight in the first half of next year. For Arum to have Ramirez risk the WBC title against Hooker, 29, he could lose control of the belt to Hearn, and that would wreck the Ramirez-Teofimo fight.

Arum could obviously still make the Ramirez vs. Lopez fight, but it wouldn’t be the same without the WBC light welterweight strap being on the line. With the complaining Arum did recently about Al Haymon of Premier Boxing Champions not letting his fighters compete against his Top Rank guys, it would look out of sorts if Arum rejects Matchroom Sport promoter Hearn’s attempts at putting together co-promotion for the Ramirez vs. Hooker fight on DAZN and ESPN. If Arum chooses to keep Ramirez holding the WBC 140 lb belt in safety just so that he’ll still have it when Teofimo Lopez moves up to light welterweight in early 2020, it would look like he’s the one that doesn’t want to work with other promoters.

It’s important that Hearn get this fight done soon, because once the World Boxing Super Series 140 lb tournament ends, Regis Prograis will be going after Ramirez to take his WBC title from him. Ramirez is a decent fighter, but arguably nowhere near as talented as Prograis. You can say the same thing about Hearn’s Hooker. Once Prograis gets a hold of the WBC title, Hearn likely won’t bother having Hooker go after him. Ramirez, 26, is a vulnerable champion, as we saw in his last fight against Jose Zepeda last February.

Ramirez beat Zepeda by a controversial decision. A lot of fans had Zepeda winning that fight, as did Boxing News 24. Ramirez had his moments in the fight, but Zepeda out-boxed him every step of the way. However the victory went to the Top Rank promoted Ramirez. It was an ugly decision. The World Boxing Council would have done well to order Ramirez to face Zepeda in a rematch so that they could clear up the controversy over the results of the fight.

Abel Sanchez talks GGG: “To be Blindsided like this is heart-breaking” »