Lomachenko vs. Crolla: Anthony not in awe of Vasiliy 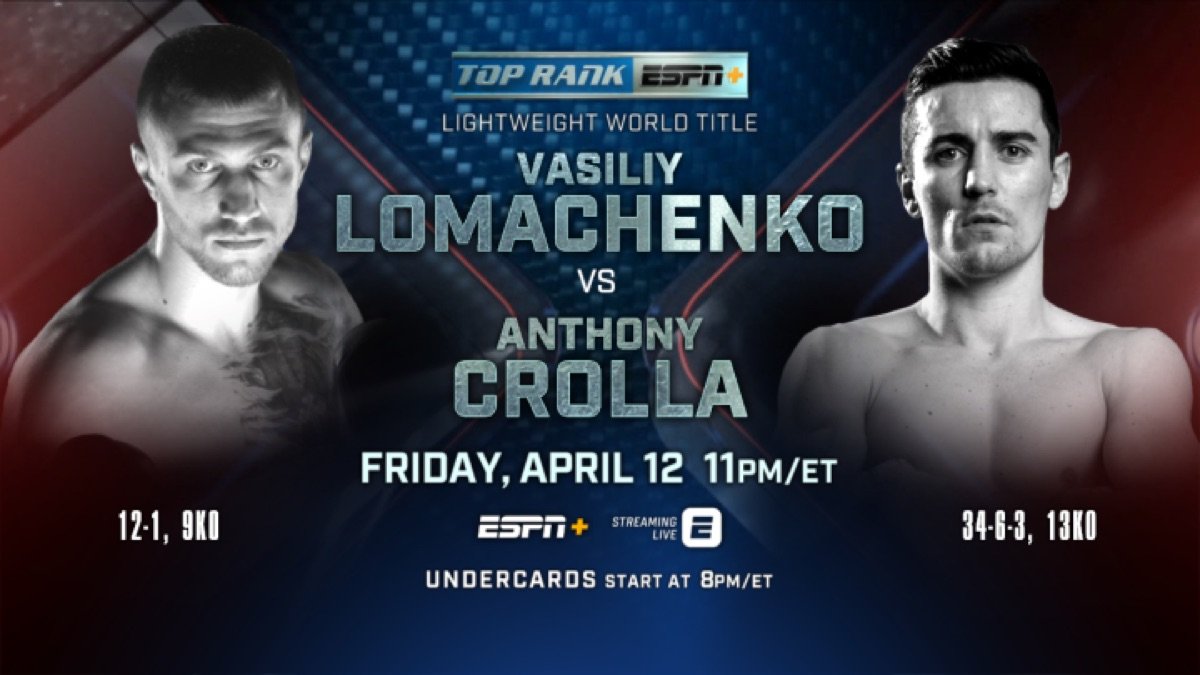 By Mark Eisner: Anthony Crolla says he’s not going to be in awe whatsoever when he gets inside the ring with the highly technical Vasiliy Lomachenko this Friday, April 12 for their fight LIVE on ESPN+ at the Staples Center in Los Angeles, California. Unlike a lot of the opponents the 31-year-old Lomachenko has fought since turning pro in 2013, Crolla (34-6-3, 13 KOs) is a former world champion.

Crolla 32, has been there before at the elite level having held the WBA lightweight title from 2015 to 2016. Crolla has proven himself against the best, and he’s not going to be intimidated by the two-time Olympic gold medalist from Ukraine when he gets inside the ring with him on Friday night at the Staples Center in Los Angeles.

“I won’t be in awe going over there whatsoever. I’ve put myself through it, and worked too hard in this camp to let that happen,” Crolla said to Sky Sports Boxing about him not being in awe of Lomachenko. “So I’m going over there confident I can do it.”

Crolla says part of the training that he’s done in his camp to prepare for this fight has involved dealing with frustrating opponents. He wanted to mimic the same kind of mental frustrations that Lomachenko, 31, will be attempting to put him under in this fight. Lomachenko likes to frustrate his opponents to try and get them to quit. Crolla isn’t going to let that happen. He’s going to stay calm, fight smart, and not get frustrated to the point where he sees no other alternative but to quit on his stool or have his trainer pull him out. The conventional wisdom is that Lomachenko will box circles around Crolla, make him look really bad, taunt him, and possibly take him out with a shot to the midsection if he doesn’t mentally quit. Crolla has an advantage though in studying Lomachenko’s past fights, and noted the things he does to try and get his opponents to quit.

“Of course there’s a chance. Like in any sport, you need a bit of luck,” Crolla said about his chances of pulling off an upset against Lomachenko. “I’m going in there with a good game plan in the best shape of my career.”

Crolla would have a better chance of winning this fight if he had a bit more punching power. Jorge Linares dropped Lomachenko in the sixth round last May. It wasn’t a fluke knockdown. Lomachenko was hit squarely by Linares with the perfect shot, and put down on the canvas. That shot would have knocked down anybody in the lightweight division, and Lomachenko proved to be no exception. In that moment, Linares showed that Lomachenko is human after all, and can be hurt. If Linares can do that to Lomachenko, then Crolla can do it as well, because he’s not far behind him in the punching power department. In Lomachenko’s last fight against Jose Pedraza, he took a lot of punishment in the course of the fight, which he won by a 12 round unanimous decision last December at Madison Square Garden in New York. After the fight, Lomachenko’s face was badly swollen from the shots that he’d eaten from Pedraza. This was a competitive fight that showed once again that Lomachenko isn’t the same fighter he was five years ago. He’s starting to show signs of aging, and his competition is catching up to him. Lomachenko still won the fight against Pedraza in beating him by the scores 117-109, 119-107 and 117-109. The fight was still a lot more competitive than Gervonta “Tank” Davis’ match against Pedraza in 2017. Davis stopped Pedraza in the seventh round, and made it look easy. For Top Rank promoter Bob Arum to be comparing Lomachenko to boxing great Muhammad Ali, it looked like an empty comment for the legendary promoter. Ali would have never struggled against a fighter like Pedraza if he were in the same weight class as him.

“I’m in a great place, feeling in fantastic shape, looking forward to Los Angeles,” Crolla said. “He’s seen by many as the best fighter on the planet. I know it’s a huge challenge ahead of me. These are the fights I’ve dreamed about,” Crolla said.

It’s impossible to know how good Lomachenko is right now. You can only judge him off his last two fights unfortunately. There was a brief period of time from 2014 to 2017 where you could argue that Lomachenko was the best fighter on the planet, but not now. Lomachenko’s last two fights against Pedraza and Linares showed that he’s clearly not the best fighter on the planet. Lomachenko is just a good fighter at this point, and starting to show signs of deterioration, which comes with age.

“I think his greatest assets are his movement, and his angles,” Crolla said. “He’s a very unique fighter. I can see what all the praise is about. He was one of the best amateurs. As a pro, he’s a three weight champion inside 13 fights. It’s pretty unbelievable,” said Crolla.

Lomachenko’s movement appears to be a good as it’s always been. What’s not as good is his defense, reflexes, and his hand speed. He looks slower, and he’s getting hit more often now than he did before. It’s true that Lomachenko had a shoulder problem that he’s been dealing with since his fight with Linares, so that could be the explanation for why he didn’t look so good in his fights with Pedraza and Linares. This fight on Friday should tell us whether it’s age or the shoulder problem that has kept Lomachenko from shining as of late.

“I’m going in there on April 12 to give my best, and shock the world,” Crolla said. “That doesn’t matter to me. Everyone is entitled to their own opinion,” Crolla said about the boxing world seeing him as having no chance of beating Lomachenko.

Crolla isn’t going to let Lomachenko scare him into quitting with his showboating tactics that he likes to use. Crolla is catching Lomachenko at the right time with him starting to show signs of slippage in his last two fights. Crolla is a body puncher like Orlando Salido, who beat Lomachenko six years ago. Lomachenko dislikes getting hit to the body, as he can’t avoid those shots by moving his head. Lomachenko is a master at making his opponents miss when they throw shots upstairs. Salido realized that, which is why he targeted Lomachenko’s body and had great success. Crolla is the same type of fighter Salido is and he’s going to make it interesting by going to the body in this fight.

“The motivation for me is to attach my name to one of the biggest names in British boxing history,” Crolla said. “As a boxing fan, who loves the sport, there’s plenty of motivation for me. I know this is bigger than any challenge I’ve ever had before.”

A victory for Crolla will definitely be one of the biggest wins in British boxing history. Next to no one is giving Crolla a chance in this fight. If he can prove his many doubters wrong, he’ll make history in this fight and cement his legacy in doing so. Crolla won’t be the first one to beat Lomachenko obviously, but he’ll get credit for beating him. Orlando Salido didn’t get a lot of credit for his win over Lomachenko in 2013, because he missed weight and then rehydrated a great deal to have a weight advantage over him on the night of the fight.

“In this camp, we’ve been working with frustrations; that’s what he likes to do. He likes to make opponents quit,” Crolla said about Lomachenko. “Physically, I’m in the best shape of my life, which I should be when I’m fighting one of the best opponents of my life. I feel very strong. I’m going to have to be on the night as well.”

Lomachenko is going to try and frustrate Crolla with his showboating in an effort to get him to quit like some of his other opponents have done. It might not work. Crolla knows what Lomachenko will be trying to do inside the ring on Friday night, so he’s not going to give up on himself the way some of his past opponents have.

“I’ve earned the shot; it’s not been given to me,” Crolla said about his fight with Lomachenko. “Without a doubt, it’ll be one of the biggest upsets in the sport. That’s the massive motivation for me,” Crolla said.

We don’t know how good Lomachenko is as a fighter, because he’s never really taken on the best fighters in the three weight classes he’s fought at. Lomachenko started out his career at featherweight [126], and never fought the lions in that weight class in Leo Santa Cruz and Oscar Valdez. Lomachenko only stayed at 126 for three years before moving up to super featherweight without fighting Cruz or Valdez. At 130, Lomachenko never fought Miguel Berchelt, Gevonta Davis, Tevin Farmer, Alberto Machado or Andrew Cancio. Those are the best talents in the division. At lightweight, Lomachenko hasn’t fought Mikey Garcia and Teofimo Lopez. Those are the two talented fighters at 135.

Boxing » Vasyl Lomachenko » Lomachenko vs. Crolla: Anthony not in awe of Vasiliy