Golovkin: “Nobody wants to fight me” 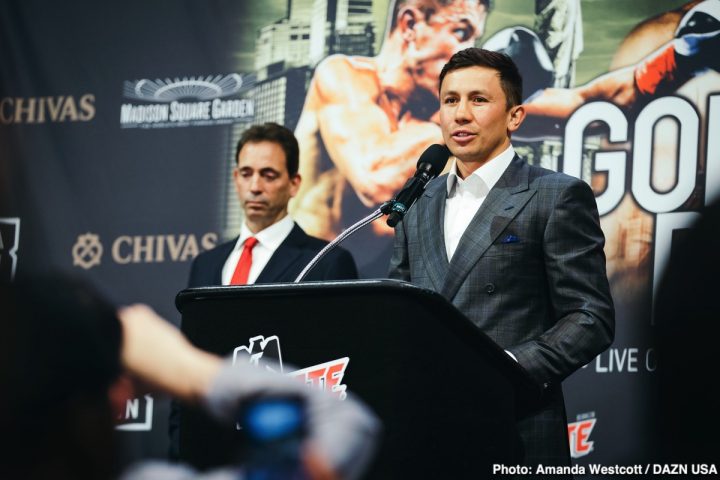 By Aragon Garcia: One reason why Gennady Golovkin is fighting the little known fringe contender Steve Rolls on June 8 is because nobody wants to fight him, he claims. That’s what Triple G is saying. He wants to fight the best, and he wants the tough guys to step up and face him, but they’re not doing it.

Golovkin says he’s willing to fight “anybody.” GGG is complaining that “nobody wants to fight” him, but Jermall Charlo and Demetrius Andrade have made it clear they want to fight him, but for some reason he’s not facing them. Maybe Golovkin doesn’t count Andrade and Charlo as fighters that he feels motivated to face?

With Golovkin’s new six-fight, nine-figure contract with DAZN, they’re going to want him to fight not just anybody. They want Golovkin (38-1-1, 34 KOs) to fight the very best starting with his next fight after he faces Rolls (19-0, 10 KOs) in a catch-weight fight at 164 pounds on June 8 on DAZN at Madison Square Garden in New York. If GGG keeps fighting guys like Rolls, DAZN isn’t going to bring in the subscribers. It’s surprising that they went along with this choice.

“I don’t exactly who this guys is. I look at him, he’s hungry, he’s dangerous, and he’s undefeated,” Golovkin said to Behind The Gloves about his next opponent Steve Rolls. “This is boxing, anything is possible.”

Former IBF/IBO/WBA/WBC middleweight champion Golovkin is openly admitting that he doesn’t have a clue who the 35-year-old Rolls is, which doesn’t say much about the Canadian fighter, does it? In looking at Rolls’ resume, he’s someone that would likely have been wiped out by Canadian David Lemieux. That would have been a good test for Rolls to take before he got to the level of Golovkin. Rolls likes to slug with his opponents, but he’s not a big puncher. Someone like Lemieux would have an easy night’s work against that kind of opponent.

“If I have big fight at 160, of course I stay at 160. If I have big name at 168, I move to 168. I want to fight, but nobody wants to fight with me. Of course,” Golovkin said when asked if he would face WBA Super World super middleweight champion Callum Smith if the fight were offered to him. “I have six fights [with DAZN]. It doesn’t matter with who. Just tough guys. Show me who’s tough. Come on, guys. I’m open for everybody. I’m open for everybody. Steve Rolls is with me because he really wants the fight,” Golovkin said in explaining why he’s facing the little known Rolls.

There are a lot of guys that want to fight Golovkin. Jermall Charlo and Demetrius Andrade are just two top level fighters that middleweight that want a piece of GGG. Whether he wants to scrap with any of them is the big question. The fighter that Golovkin needs to stick around at middleweight to fight is a trilogy fight against Saul Canelo Alvarez, who he lost to by a 12 round majority decision in his last fight in September. If Golovkin can’t get that fight, then he needs to move up to super middleweight and go after the likes of Callum Smith for his WBA super middleweight title or perhaps IBF champion Caleb Plant or David Benavidez if/when he wins the WBC super middleweight title. Callum would be a really tough fight for Golovkin to take. The 28-year-old Smith is a bigger puncher than Canelo, and he’s a lot bigger at 6’3″. If Golovkin takes on Smith, he’s going to need to be ready for a war, because that would be a tough fight for him. It would be better for GGG to take on someone like Billy Joe Saunders or Plant before he gets to the level of Callum. If Golovkin jumps straight into the super middleweight division and takes on Callum in his first fight, it could end badly for him. Callum knocked out Rocky Fielding in the first round several years ago.

Danny Roman vs. TJ Doheny on April 26 Live on DAZN »