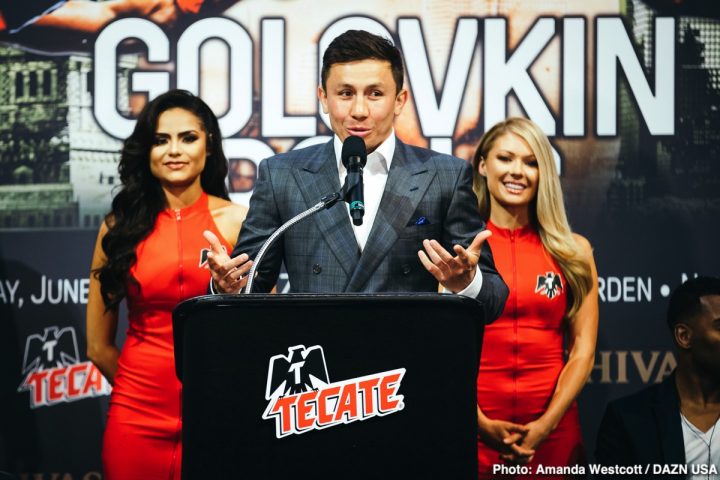 By Dan Ambrose: Gennady Golovkin and his promoter Tom Loeffler are hoping they can negotiate the third fight with Saul Canelo Alvarez in a different location outside of Las Vegas, Nevada. The first two fights between Canelo (51-1-2,35 KOs) and Triple G took place in Vegas at the T-Mobile Arena, and both of them resulted in controversial endings.

Canelo and GGG fought to a 12 round draw in the first 2017, and then Alvarez bat Golovkin by a 12 round majority decision last September in the same venue.

Loeffler says his fighter former IBF/WBA/WBC middleweight champion Golovkin (38-1-1, 34 KOs) didn’t have a choice in where the fight would take place. If he wanted to fight Canelo, he had to fight him in Las Vegas at the T-Mobile Arena. Now that both Canelo and Golovkin have been given huge contracts with DAZN, there’s no longer any reason for them to return to the same place they’ve been fighting at, according to Leoffler. Golovkin and Loeffler like the idea of having the third fight at Madison Square Garden in New York. Canelo just fought there last December against former WBA World super middleweight champion Rocky Fielding, and he brought in a huge crowd.

“I’m a fighter so I will fight no matter what. If it seems like the fight is going to Las Vegas, now we know we’ve seen Vegas’ true colors, and we’ll not try and get out of the fight. But we’ll try and change the situation to make it better for both fighters,” Golovkin said during Monday’s New York kickoff news conference for his June 8th fight against Steve Rolls.

Going to back to Vegas obviously would be a tough pill for Golovkin to have to swallow right now given the results he’s experienced in his last two fights that against Alvarez. It’s natural for a fighter/person to not want to return to a location where they’ve had bad experiences. If Canelo was being asked to go back to a place he’d been arguably robbed of a victory, he probably wouldn’t want to go back there, especially if it a situation that happened twice.

There could be a problem if Canelo refuses to ever face Golovkin again unless he comes back to the T-Mobile Arena or agrees to fight him at another venue in Las Vegas. If the judges are going to be from the same pool regardless of which venue the fight takes place in Las Vegas, Golovkin would be dealing with the same judges no matter what location the match takes place in that city. It’s potentially a win-win situation for Canelo if he refuse to fight Golovkin anywhere but Las Vegas. Golovkin and Loeffler have given in and let Canelo have his way of fighting in Vegas. It would seem likely that he’ll drag his feet and insist that the third fight take place in Las Vegas at the venue of his choosing or else no fight. If that’s the case, DAZN could be stuck not getting the fight that they wanted more than anything between Canelo and Golovkin. Would DAZN put Canelo’s feet to the fire in that situation or would they exert pressure on the older fighter 37-year-old Golovkin to buckle once again and give the Mexican star his way yet again? What happens if GGG says, ‘No, I’m not going to do it.’ It could be bad for DAZN, but it could be a horrible situation for Golovkin if he agrees to let Canelo get his way and he finds himself on the receiving end of a third controversial decision.

“Canelo fought here in December. He told the Garden he likes fighting here. Golovkin has fought here at Madison Square Garden,” Loeffler said. “I think the third fight [between Canelo and Golovkin] will come down to economics in regards to the highest offer. In the first two fights with Canelo, there was no option for Gennady. They put it to us that Canelo will only fight Gennady in Las Vegas. We love the MGM and T-Mobile Arena, and the way he was treated. But when you arguably win two fights in a row, and only one judge out of six scores it for him, there’s something wrong. For whatever reason, there’s something wrong. So that’ll be a big point of the negotiations, the location, because now he’s no longer obligated to fight in Las Vegas like he was in the last two fights [against Canelo],” Loeffler aid about Golovkin.

If it comes down to economics, as Loeffler says, then there’s a chance the T-Mobile might outbid Madison Square Garden or one of the other New York or Texas venues. If it’s only about money and not a sense of what Golovkin is comfortable with right now, he may be forced to go back to the T-Mobile if they make a higher bid than the other locations. At that point, Golovkin would need to make a decision what he wants to do. Does he buckle and give Canelo and Golden Boy what they want/need in order to win by agreeing to fight at the T-Mobile where the judging has swung in his favor for the two fights that have taken place there i the past? It’s going to be tough on Golovkin cause he could have a lot of pressure on him by DAZN and perhaps his own promoter Loeffler if they both look his way to be the one to given to Canelo again.

“The third fight between Canelo and Golovkin is still one of the biggest fights in the sport of boxing, and that’s one of the reasons why Gennady Golovkin signed with DAZN,” Loeffler said during Monday’s news conference in New York. “DAZN obviously wants that fight for it’s subscribers. When Golovkin had the titles, he had no problems fighting Canelo with no titles. Canelo got stripped of his title; the only Mexican fighter in the history of the sport that had the WBC title that gave up that title in order not to fight GGG after it was mandated. So I don’t think the titles are going to make a difference. GGG and Canelo are above needing a title at this part of their careers. So a statement like that from Oscar [De La Hoya], that’s just posturing for whatever negotiations they’re going to try with DAZN to try and make that fight. But DAZN has made it clear, that’s the fight they want to see for people,” Loeffler said.

If Canelo insists that Golovkin MUST have a title in order to fight him a third time, it would be a big hint that doesn’t want to continue fighting him. It’s unclear whether Canelo agreed with DAZN that he would fight Golovkin a third time when he signed the huge 11-fight, 5-year, $365 million contract with them. If he didn’t agree to fight him, then he can ignore him and continue to setup conditions that he must meet in order for him to give him a trilogy fight. Those conditions might be that Golovkin agree to fight in Las Vegas at the T-Mobile, and have a world title in his possession for the fight to take place. If Golovkin were to lose to another champions while trying to meet Canelo’s conditions, then he would be eliminated from getting the third fight. It almost almost sounds Canelo really doesn’t want a third fight with Golovkin, because if he didn’t, he wouldn’t set up conditions that he must meet before he’d face him again. It’s a power play on Canelo’s part either way you want to look at it.