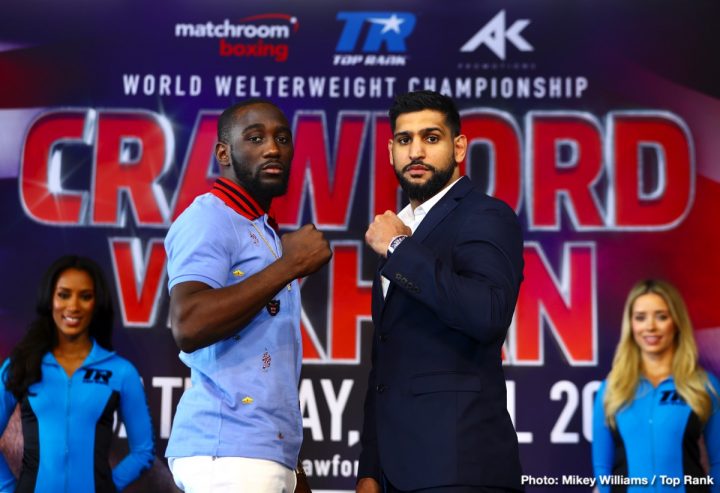 By Chris Williams: Amir Khan (33-4, 20 KOs) is being overlooked and counted out by a vast amount of boxing fans ahead of his fight against #2 pound-for-pound fighter Terence Crawford (34-0, 25 KOs) this Saturday night, but we could very well see an upset in this fight. WBA Super World welterweight champion Keith “One Time” Thurman points out that Crawford, 31, has beaten NO ONE at 147, and he took longer than he should have in stopping former WBO welterweight champion Jeff Horn in the ninth round last summer on June 9 in his debut in the 147 lb weight class. Thurman says Horn wouldn’t go five rounds with him or IBF welterweight champion Errol Spence.

Thurman talks about how Crawford started his pro career 11 years ago at lightweight, and he’s moved up in weight two weight classes since then to get to 147. Thurman says for a lot of fighters, they hit a barrier when they move up to welterweight, and they find out they’re not able to dominate in that division like they’d been doing in the lower weight classes. Crawford has looked good since moving up to 147 in beating Jeff Horn and Jose Benavidez Jr., but those aren’t top welterweights. They’re fighters signed with the same promotional company, Top Rank, as Crawford, and who have been matched selectively by the company against fighters that are beatable. Crawford beat them, but the wins don’t give the fans a clear picture of how he’ll do against the best welterweights. Those two victories only showed that Crawford can beat fighters that most welterweights in the division would beat as well. Given the way Top Rank has matched Crawford, and many of their fighters in their stable, the fans don’t know how well he’ll perform against Khan, Errol Spence Jr., Shawn Porter, Keith Thurman, Danny Garcia or Yordenis Ugas.

“Crawford doesn’t impress me at 147,” Keith “One Time” Thurman said to Fighthype. “He was very impressive in the lower weight classes, but Jeff Horn doesn’t go five rounds with Keith Thurman or Errol Spence. You know what I mean? He went eight with Crawford. Is that because he [Crawford] stood southpaw the whole time? He never fought right-handed during the whole fight. When he actually switched right handed for 30 seconds, he slapped him up pretty good. If I was his coach, I would have told him in the next round to finish it like that,” Thurman says.

Crawford’s tendency to switch back and forth between the orthodox and southpaw stance in his fights impresses a lot of boxing fans, and members of the media. However, Crawford isn’t a better fighter when he fights southpaw. He’s much better when he’s fighting right-handed. There’s not an improvement. For instance, if you look at Crawford’s fights against Felix Diaz, Jeff Horn and Jose Benavidez Jr. He dominated those fighters when he was fighting right-handed. Instead of sticking with that stance, he would switch to southpaw, as if he felt he needed to in order to keep them guessing. He would then get hit a lot more, and not nearly as good. It was just a waste of time. The constant changing of stances by Crawford is wasted effort on his part. It’s like a baseball pitcher that is doing well throwing fastballs. Instead of staying with that pitch, they start throwing change-ups, curve-balls and sliders, and the hitters start touching them up for runs. Crawford thinks too much inside the ring, and hurts himself by trying to be too slick instead of sticking with what works. You can expect Crawford to switch stances a lot against Khan on Saturday in order for Terence to try and impress the boxing fans but it’s not something that will help him in the fight. It might even hurt him. If Khan goes after Crawford when he switches to southpaw, he could deck him. If Crawford stubbornly stays in the southpaw stance like he did in the Jeff Horn fight, he’s not going to do as well.

Thurman is correct in pointing out that Crawford hasn’t beaten anyone in the welterweight division for him to be seen as one of the top fighters in the weight class. Thurman, of course, is well aware of who Crawford beat for him to be given all the praise by the boxing fans. The average fan doesn’t realize that Horn and Benanvidez aren’t major players at 147. In other words, Top Rank’s decision to match Crawford against beatable fighters, which you can argue was done to make him look better than he actually is, has worked, because it has the fans believing that he’s either #1 or #2 at welterweight. Thurman is dumbfounded when he sees fans saying that Crawford is the best without having fought anyone. Thurman realizes who Top Rank has been feeding Crawford by matching him weakly. The fans don’t understand that. They think Benavidez and Horn are elite fighters. What it tells you is the casual boxing fans are the ones that have jumped on board the Crawford express, whereas the hardcore fans and the astute fighters like Thurman are saying, ‘Wait a second. Crawford STILL hasn’t fought anyone. Look at the mediocre fighters that Top Rank has fed him. They’re making Crawford look better than he actually is by feeding him weak opposition, and now they’re doing the same thing with recently signed former heavyweight champion Tyson Fury by matching him against Tom Schwarz instead of Deontay Wilder. They did it with Gilberto Ramirez as well by matching him against beatable fighters since 2016 instead of the best super middleweights.’

“I don’t think it’s going to be as easy as Terence thinks,” Gervonta “Tank” Davis said to Fighthype about Crawford’s fight against Khan not being an easy one for him. “But if he catches Khan, he’s out for sure. But Khan [can last], a couple of rounds. If he doesn’t knock him out, it doesn’t matter. Not everyone is a big puncher. Khan has fought some big people. He fought Canelo. If he doesn’t knock him out, that don’t mean nothing. Just look good,” Gervonta said.

Khan being selected as Crawford’s opponent is arguably more of the same soft match-making by Top Rank for the Nebraska native. One would have to be a hardcore boxing fans to know that, of course. The casual fans probably aren’t aware of Khan’s history of being beaten each time he’s tried stepping up against better opposition. Khan has failed when his promoters put him in with Breidis Prescott, Lamont Peterson, Danny Garcia and Saul Canelo Alvarez. Khan couldn’t beat those fighters, and he was pulled back against B and C-level fighters, which is where he’s been since his his last defeat at the hand of Canelo Alvarez in 2016. Fans point out that Khan has a victory over a prime Marcos Maidana in 2011, but if you look at that fight, Khan should have lost that fight. The referee got in the way of Maidana when he had Khan hurt in the 10th round, and was trying to finish him. Maidana is Khan’s best win as a pro, but he should have lost that fight if the referee had let it play out. It was survival of the fittest in that fight, but the referee stepped in and was pulling Maidana off of Khan repeatedly when he had him hurt in the 10th

Despite having a flawed chin, poor stamina, and having fought infrequently since 2014, Khan can still win this fight against Crawford. Khan will need to fight smart, and not let Crawford box him from the outside or rush him to land his shots. Crawford has problems when his opponents attack him hard with a lot of power shots. Viktor Postol was getting the better of Crawford in the 12th round of their fight when he attacked him hard for the first time in the match. Felix Diaz and Breidis Prescott both had success when they launched attacks against Crawford. What this tells you is Crawford can be beaten when he’s forced into a fights where the action is nonstop with fighters that don’t let him rest. He’s a counter like Canelo Alvarez, and those type of fighters have problems when they have to deal with nonstop shots. They do better when they’re defending against single punches. If Khan attacks Crawford with flurries, he’ll likely get on his bike and pedal away as fast as fast as possible like he did in the Postol fight. Khan has got to go after Crawford, force him to defend against flurries, and not let him pick him apart from the outside the way he wants to.


« Errol Spence vs. Terence Crawford: Why it needs to happen and why it might not