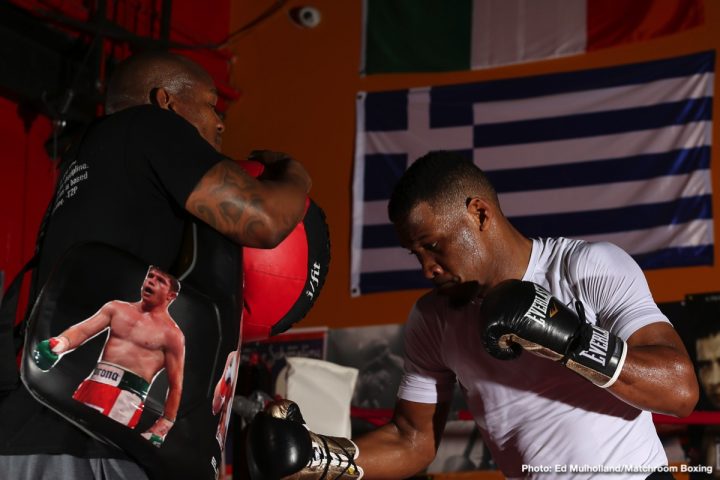 By Aragon Garcia: Daniel Jacobs thinks it’s crazy the way former middleweight champion Gennady Golovkin and his team talk about fighters supposedly being afraid to fight him, but then they turn around and say they’ll still want to take the Saul Canelo Alvarez trilogy fight in September, even if Jacobs beats him on May 4. Jacobs thinks Golovkin doesn’t want a rematch with him after their controversial fight two years ago in March 2017. Golovkin won a fight that many fans thought he lost against Jacobs. Danny says he looked in Golovkin’s eyes afterwards, and he could see that GGG knew he lost that fight. Defeat was written all over Golovkin’s face.

A move like that by the Kazakh fighter would show Jacobs (32-2, 29 KOs) that Golovkin sees boxing as just a business now and not as a sport.

WBA/WBC middleweight champion Canelo will be fighting IBF champion Jacobs on May 4 on DAZN at the T-Mobile Arena in Las Vegas, Nevada. The winner of the fight will hold Golovkin’s old titles that he lost last year.

Jacobs, 32, still needs to prove he can beat Canelo (51-1-2, 35 KOs), and that’s easier said than done. Canelo is the best fighter in boxing in the eyes of many fans in the world. Jacobs’ performances in his last four fights show that he’s not fighting on the same level as Alvarez. If Jacobs is going to pull off the upset against the Golden Boy Promotions star, he’s got to show something that he’s now shown since his two wins over Sergio Mora and his stoppage victory against Peter Quillin. Those fights took place three to four years ago. Can Jacobs still fight at that level? We’ll soon see. His fight with Alvarez is only two and half weeks away from today. Jacobs will need to put up or shut-up.

“I never look past any fighter, but it’s absurd that Golovkin and his team would always say that people are fearful of facing them and that they were in it for the love of the sport and to fight the best,” Jacobs said about GGG. “Me getting the win over Canelo, you would think that they would want the rematch, but we heard it out of their own mouths that they still wouldn’t want the rematch if I win. They would rather fight Canelo. So, we see from that that boxing is a business. It’s a compliment for sure that he thinks that way,” Jacobs said.

Golovkin is going to be in a tough position if Jacobs gets the victory over Canelo. It’ll be a dilemma for Golovkin. Does he ignore Jacobs, and go after the money fight with Canelo or does he do the right thing by fighting Danny?

If Jacobs beats Canelo, GGG will hurt his popularity for sure if he sidesteps Danny and insists on fighting Canelo. Many fans are already disappointed with Golovkin that there’s talk of him wanting to fight Hassan N’Dam or Steve Rolls next rather than WBO champion Demetrius Andrade. The fans see Golovkin as cherry-picking fights after his loss to Canelo last September. It’s as if the defeat took away Triple G’s courage. While Canelo is risking his neck fighting the best in Jacobs, Golovkin, 37, is viewed by a lot of people as looking to take a soft touch in N’Dam, Rolls or Kamil Szeremeta. What made Gennady so popular in the past was his willingness to fight the best. Fans thought that Golovkin was being avoided by the best fighters, but that perception is changing since his loss to Canelo.

GGG has now been out of action for seven months, and he still doesn’t have an opponent for his next fight, which is supposedly was going to be taking place in June. The names that are being mentioned as possible options for GGG aren’t what the fans wanted from him. If not Andrade, the fans want to see Golovkin fight the likes of Jermall Charlo, Callum Smith, Jaime Munguia or Gilberto Ramirez. Fighting N’Dam or Rolls is going to hurt Golovkin’s popularity, that he’s worked so hard to cultivate in the last seven years since his fights started being televised in the United States in 2012.

“Golovkin knows he lost the fight against me,” Jacobs said. “I saw it in his eyes when they gave me the decision, and he’s never been vocal about giving me the rematch. It’s either been small talk or just swept under the rug. So, for me, I just want to make sure that I not only fight Golovkin again and prove the naysayers wrong, but show him that he knows that I am better than he is,” Jacobs said.

Golovkin looks like he’s aging, slowing and not the same fighter he was five years ago. GGG’s inactivity also isn’t going to help him when he/if he faces Jacobs or Canelo again. Golovkin has been out of the ring resting while those two fighters have been staying busy with their careers.

Jacobs needs to focus his attention on Canelo Alvarez. That should be his entire focus right now instead of talking about the fish the got away from him in GGG. The fans thought Jacobs won, but he didn’t, so he’s got to make sure he doesn’t get beaten again. Canelo is fighting at an unreal level right now, and looking unbeatable by anyone from the 160 to 175 pound weight classes. Jacobs has the light heavyweight size to potentially give Canelo problems on May 4, especially if he rehydrates into the 180s or low 190s for the fight. Canelo is going to try and walk Jacobs down, and take him out the way he did with Rocky Fielding. Jacobs looked ragged in moving around the ring to avoid the pressure from Sergiy Derevyanchenko in his last fight in October. Jacobs edged that fight by a 12 round split decision to capture the vacant International Boxing Federation middleweight title. If Jacobs fights like that against Canelo, he’ll lose. Jacobs isn’t going to win going backwards all night long. He’s got to show that he wants it more than Canelo by standing and fighting. Some of the comments from Jacobs made on Monday at the media day in Las Vegas seem to suggest that he’s going to try and move to avoid Canelo’s attacks. That tells you that Jacobs hasn’t learned from his loss to GGG in 2017, that he can’t win fights against the best by running from them. If Jacobs considers himself the best fighter in the 160 lb weight class, then he’s got to be able to stand and fight like the warriors of old. Marvin Hagler and Sugar Ray Robinson didn’t run from their opponents when they fought at middleweight. Jacobs can’t do that if he wants to beat Alvarez and GGG.