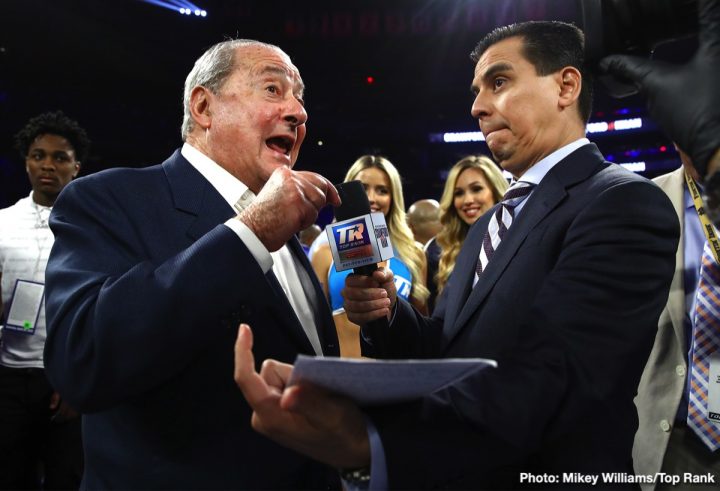 Arum entered the ring to be interviewed following Crawford’s sixth round knockout victory over Amir Khan (33-5, 20 KOs at Madison Square Garden in New York. Arum immediately told the interviewer from ESPN that Spence and Crawford both want the unification fight, but its being blocked by Spence’s adviser Al Haymon, who he says refuses to let any of his Premier Boxing Champions [PBC] fighters face Top Rank guys.

Initially, Arum looked fine when he entered the ring to celebrate his fighter Crawford’s win over Khan last Saturday night, but as soon Spence’s name was brought up, Arum went off, and seemed to come unglued momentarily. He went on a long rant on the subject.

“Listen, we want to fight Errol Spence. I think Errol wants the fight. There’s one guy that’s stopping it, and that’s Al Haymon,” Arum said after Crawford’s fight against Khan last Saturday night in talking about wanting to setup a fight between Crawford and Spence. “Everyone in boxing should refuse to patronize Haymon’s fights until he agrees to have Spence fight Crawford,” Arum said.

Haymon has a number of other top welterweights that work with his company PBC. He seems to be focusing on matching those guys, which is something that Arum has often done in the past with his Top Rank promotional company. Arum has always done a lot of fights involving his own guys. We saw Manny Pacquiao, when he was with Top Rank, fight Tim Bradley three times, Juan Manuel Marquez four times, Erik Morales three times and Marco Antonio Barrera twice. Those were all Top Rank fighters.

Haymon is doing what Arum has done for years in choosing to match Spence with a lot of his own fighters in his PBC stable. Arum obviously wants/needs Spence to fight Crawford right now to help increase the Nebraska native’s popularity before he gets much older, and starts losing. Crawford is 31 now. It’s only a matter of time before he starts getting beaten by the younger lions. Arum needs Spence to fight Crawford so that he can make him a PPV star. Last night’s ending, with Crawford landing a low blow that hurt Khan bad enough for the fight to be stopped, likely won’t increase his popularity. If anything, the outcome of the Crawford-Khan fight might hurt Crawford’s popularity. It could lead to boxing fans giving pause when Top Rank announces Crawford’s next fight, especially if it’s another pay-per-view fight on ESPN.

“Not Al Haymon,” Arum said when asked if the pressure from the boxing public will eventually lead to Haymon making the fight between Spence and Crawford. “He refuses to let any of his fighters get beat by a Top Rank fighter. If Terence fights Errol Spence, there’s only one winner and Al Haymon refuses to allow it,” Arum said.

#2 Ring Magazine pound-for-pound fighter Crawford turned back the threat against Khan last Saturday night by dropping him with low blow in the sixth front of a big crowd of 14,091 boxing fans at Madison Square Garden in New York. Although the fight ended with a foul on Crawford’s, he was still given the win, because Khan couldn’t continue fighting.

It’s unclear whether this was an effort to win by a disqualification on Khan’s part or what. The only thing that was clear was Crawford hit Khan low, and he was unable to continue fighting. In boxing, you can win fights like that. In the NFL, if you commit a foul, you get penalized with a flag, and it hurts the team. Crawford won the fight, but it wasn’t a good moment for him, and definitely not a good look. Crawford made it worse afterwards by saying that he didn’t hit Khan low. The replays showed clearly that Crawford nailed Khan with a low shot, but the Top Rank fighter continued to say it was a punch to the leg until the post-fight news conference.

“The fight I want next is Errol Spence,” Crawford said. “Whenever he is ready he can come and get it.”

Crawford will probably get a fight against Spence eventually, but it’s going to be a while. Spence has options right now that could eat up two or three years before he looks in Crawford’s direction for a unification fight. If Crawford is still a champion at that point then the two could face each other. In the meantime, Crawford needs a BIG upgrade from the likes of Khan, Jose Benavidez Jr. and Jeff Horn in terms of competition. If Top Rank wants to make Crawford into a star, matching him against guys like Khan, Horn and Benavidez isn’t the way to do it At the very least, Crawford needs someone like Danny Garcia to increase his popularity.

At the post-fight news conference, a reporter asked Crawford if he’d be willing to entertain the idea of moving up to 154 in order to expand his pool of top fighters to help him get big fights, but he didn’t want any part of that. Crawford says he just moved up to 147, and he doesn’t plan on going up to 154 right now. That means that Crawford could be stuck fighting a lot of additional old guys in the near future. Before Top Rank was able to find Khan to get him to take the fight, they were trying to match Crawford against 34-year-old Luis Collazo, who is a former Khan victim. Now that Khan’s out of the picture, it’s easy to imagine that Top Rank will match Crawford against Collazo next. That’s a poor match-up.

“We want to fight Errol Spence. Everyone wants the fight. There is one guy stopping it, and that is Al Haymon,” Arum said.

Khan was knocked down by Crawford in the first round by a right hand. That shot had Khan hurt, and ready to be taken out. However, Khan was still too fresh at that point in the fight for Crawford to knock him out. When Crawford attempted to stop Khan, he was nailed a couple of times by him.