Shawn Porter says his power will be key against Ugas 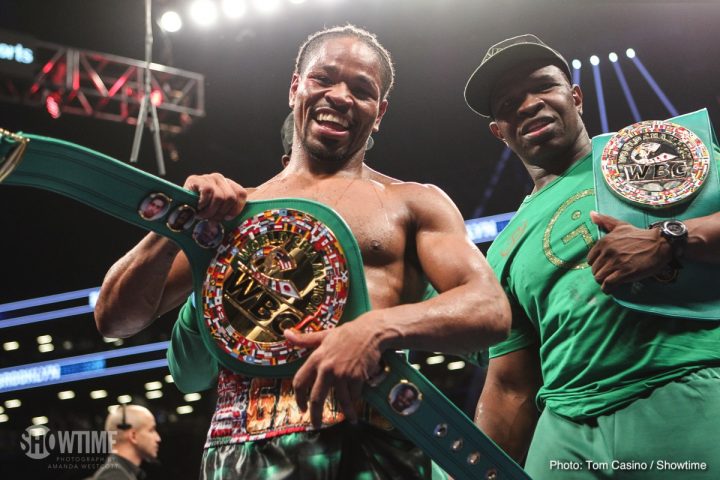 By Jeff Aranow: Shawn Porter has been working on his punching power for his first defense of his WBC welterweight title on Saturday night against #6 WBC contender Yordenis Ugas in their fight on Premier Boxing Champions on FOX & FOX Deportes at the Dignity Health Sports Park, in Carson, California.

Ugas was a highly decorated amateur while in Cuba. He captured a bronze medal in the 2008 Olympics. He also won gold medals in the 2005 World Championships, and 2007 Pan American Games. The knock on Ugas as an amateur and as a pro is his punch resistance isn’t as good as it should be. In terms of technical boxing skills, Ugas is an extremely talented fighter. He falls apart when pressured though.

It could be bothering Porter that he’s not been able to knockout many of his opponents in the last five years of his career. Out of his last seven fights, Porter has knocked out just two fighters in Erick Bone and Andre Bone.

Not being able to knockout guys has forced Porter to win grueling 12 round decisions in fights that he’s been forced to take punishment en route to winning. If Porter has improved his power like he says he has, then he’ll make his job that much easier on Saturday night against Ugas, who has a 42% knockout percentage going for him.

The Porter vs. Garcia fight hasn’t gotten a lot of attention unfortunately. The boxing world is focused on this Saturday’s fight between Dmitry Bivol and Joe Smith Jr., as well as the upcoming Errol Spence Jr. vs. Mikey Garcia.

This is a big step up for the Cuban Ugas, who has been brought along slowly during his nine-year pro career. Although Ugas has won his last eight fights, he’s not fought any of the talented welterweights. #6 WBC Ugas was beaten by Amir Iman and Emanuel Robles in 2014. Ugas’ 10 round decision win over Thomas Dulorme would have been a draw if the referee hadn’t twice deducted points from Dulorme for low blows. The referee was playing it really strict in quickly taking off point from Dulorme in a fight that saw a lot of belt line shots. That’s a fight that Ugas might have lost if the referee hadn’t been so punitive on the night.

“We’re going to see on fight night what kind of differences you’ll see in my game,” Porter. “We worked on a lot of different things for me and to get ready for Ugas. I think power is really going to come into play. We really were able to focus on that. That might be something new that you see. If I get an early knockout, it’s not because Ugas can’t take a punch,” Porter said.

Porter should forget about trying to load up too much in this fight. He’s never going to be a knockout artist, and if he tries to change his fighting style at his age at 31, he might get clipped like he did in the 12th round of his fight with Adrien Broner in 2015. Porter won that fight, but he was hurt in the final round in getting dropped hard by Broner. A fight where Porter is going to need punching power is when he faces IBF welterweight champion Errol Spence Jr. If Porter lacks the power to keep Spence off of him, he’s going to worn down with his heavy body shots and likely knocked out. Porter won’t be able to mug Spence like he’s done against most of his opponents with his physical roughhouse style of fighting.

“I don’t think Ugas has fought at the top level as a professional,” Porter said. “In order to not underestimate him, you have to understand he fought at that highest level consistently in the amateurs. I know he’s training to be ready for this kind of environment.”

It goes without saying that Ugas hasn’t fought at the top level since turning pro. he tried mixing it at the top level against Amir Imam, and was found wanting. Against Dulorme, who is more of fringe contender, Ugas fought him to a standstill, looking no better or nor worse than him. Ugas’ best opposition as a pro have come against these fighters:

Those are fringe level fighters for the most part, and Ugas was beaten by two of them and deserved a draw against a third. The question is has Ugas improved since his fight with Dulorme in 2017 or is he the same fighter? We can’t know. Just based on the level of opposition that Ugas has fought in his last three fights, it’s impossible to know if he’s gotten better or not.

Porter needs to make a statement in this fight to show the boxing public that he’s one of the best. IBF champion Errol Spence Jr. is interested in facing him if the two of them win their fights this month.