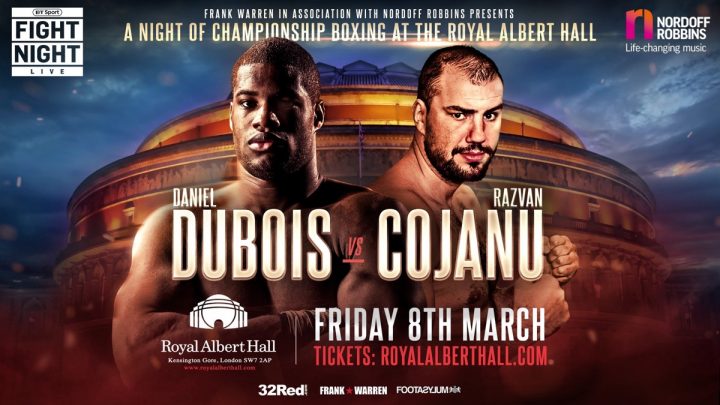 DANIEL DUBOIS HAS thrown down the gauntlet to Nathan Gorman by stating he will win by knockout against his heavyweight rival should a fight between the pair be finalised for later this year.

The pair’s promoter, Frank Warren, revealed earlier this week his intention to put the young heavies in together after a period of time where both are kept busy and public demand for the match increases.

Gorman has been the more pro-active in calling for the collision in interviews and across social media, while the more reserved Dubois has, for the most part, kept his counsel and simply pointed out that he will fight whoever is put in front of him.

The Londoner, who takes on former Gorman opponent Razvan Cojanu at the Royal Albert Hall on Friday, has now broken his silence on the subject and expressed a huge willingness on his part for the young heavyweight showdown to be made.

The fact that the Nantwich man is well ahead on points in the talking stakes has made no impact on the 21-year-old.

“Not really, it is boxing and I don’t get ramped up about stuff like that,” Dubois told Steve Lillis on The Boxing Podcast. “I have no emotion at all about it and we just have to wait and see.

“I am relishing that fight and I will take him on at any time. There is a time on it now so we can look forward to that.

“I definitely want it if we can make it this year,” Dubois insisted, before responding to a question on the likely outcome.

“A knockout win for me.”

NATHAN GORMAN BELIEVES a stoppage victory over Razvan Cojanu for Daniel Dubois at the Royal Albert Hall on March 9 might just prompt the Londoner to expedite a highly-anticipated encounter between two of the top young heavies in world boxing.

The Nantwich-based Gorman laboured a little in overcoming the tall and awkward Romanian in December and eventually prevailed via a convincing unanimous decision at the Manchester Arena.

Now it is Dubois’ turn to take the test against the former world title challenger and Gorman suspects a spot of one-upmanship will come into play when boxing returns to the spectacular South Kensington venue that could lead to a ‘down the line’ fight edging closer.

“It is a two-way street that fight,” explained the 22-year-old. “I can see either Daniel knocking him out early or Razvan cuddling him and doing little tricks then getting to round seven or eight and still doing the leaning on with little elbows, shoulder in the face.

“It will test Daniel’s heart but, on the other hand, he could have the perfect style and end up knocking him out.

“I hope he does, I really do,” added the 15-0 Gorman – who returns to the ring at the Morningside Arena in Leicester on February 23 – believing it will fuel the confidence of the 21-year-old Dubois to accept a thrilling domestic duel between the pair.

“He’ll probably think, in his own mind, if I’ve knocked Razvan out I can knock Nathan out and he might get the cojones to fight me.

“I’ll be there cheering him on.”

Elsewhere on the show at the Royal Albert Hall, Nicola Adams OBE will look to make history and be the first female crowned World Champion at the venue as she challenges for the WBO World Flyweight Title on International Women’s Day. Liam Williams puts his newly won British Middleweight Title on the line against Brentwood bruiser Joe Mullender. Archie Sharp defends his WBO European Super Featherweight title and 14-0 unbeaten record against 11-0 Lucas Ballingall. Johnny Garton will also be in action defending his British Welterweight Title.