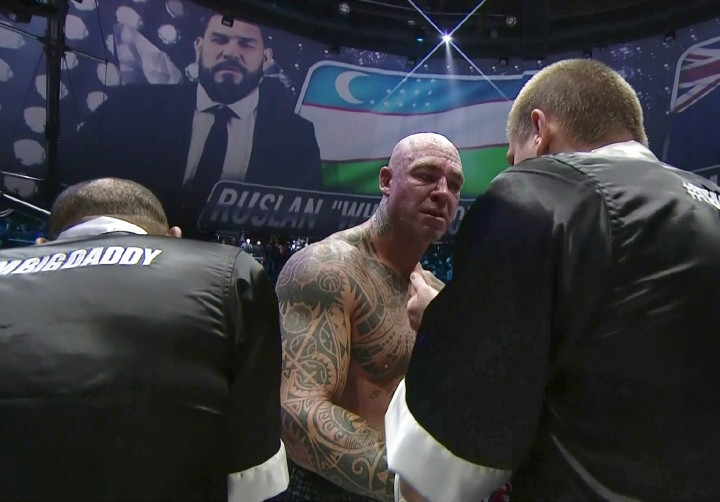 The only thing that you can debate in watching tonight’s fight is whether Browne deserved to win even one round. He looked really bad against the journeyman Sokolowski, whose 6-15-2 record is very deceiving. He’s a much different fighter now than he was earlier in his career. Sokolowski looked like a heavyweight contender tonight, and not a journeyman. The left hook that Sokolowski was hitting Browne with all night long would have knocked out a lot of the contenders in the top 15. It was beautiful left hook that Sokolowski watching catching ‘Big Daddy’ Browne with the entire six round fight.

The referee scored it 57-56 for Browne. Boxing News 24 saw it the other way, scoring it for the 32-year-old Sokolowski 60-54. Sokolowski appeared to win every round, as Brown was beaten to the punch with the fast left hook and right hand from the lightning quick Sokolowski.

Browne, 39, was knocked down in round 2 after getting tagged by a left hook by Sokolowski. Browne was attempting to throw a big right hand from the outside, and Sokolowski caught him flush with a perfectly timed left hook that dropped ‘Big Daddy’ on his backside. It was a clean knockdown. There was no slip involved.

The fight followed a pattern from round three on with Browne trying to throw uppercuts from the outside, and caught caught with hard left hooks from Sokolowski almost every time. Browne tried throwing long right hands in rounds four and five, but Sokolowski would catch him with jabs and left hooks. In the fifth and sixth, Browne focused mostly on just throwing his jab. That was the only punch that he had success with in the last half of the fight, but he was still getting out-punched by Sokolowski, who was putting pressure on him by walking him down. Browne looked tired by the sixth round from the pressure that Sokolowski was putting on him. It’s easy to assume that if this fight had been a 10 to 12 round bout, Browne would have been knocked out, considering how tired he was.

Sokolowski’s nose was bloodied in the third round. It would continue to bleed for the remainder of the fight, but it wasn’t a problem for him.

This appeared to be a clear victory for Sokolowski. It’s unclear what the referee was watching for him to see Browne was the winner of fight, because he was getting caught repeatedly by shots.

All in all, it was a badly scored fight by the referee. Browne didn’t speak of wanting to give Sokolowski a rematch afterwards, but he should think about doing so. This was an empty win for Browne. Matchroom Boxing promoter Eddie Hearn is now going to put together a fight between Browne and David Allen on April 20. That’s the fight that has been talked about. At this point, one would have to view Allen as a clear favorite to win that fight. As long as there quality judges working the fight that know how to score it match correctly, Allen will have an excellent chance of winning. You’ve got to feel sorry for Sokolowski tonight. He did a great job, and clearly should have had his hand raised in this writer’s opinion. With the big existing plans that Hearn had of Browne, 39, facing Allen on the 20th of April, it’s really not surprising that Sokolowski wasn’t given the decision win tonight. Had the referee given Sokolowski the ‘W,’ it would have messed up Hearn’s plans of matching Browne against Allen next month on April 20.

Hearn had already been counting on Browne winning tonight, as it was a sure thing, which it should’t have been. Hearn says Dereck Chisora will be on the undercard of Allen vs. Browne on April 20, as well as Conor Benn and Josh Kelly. Hearn won’t be matching Chisora against Joseph Parker on that fight date, because he’s saving that one for the undercard of Dillian Whyte’s next fight on July 13.