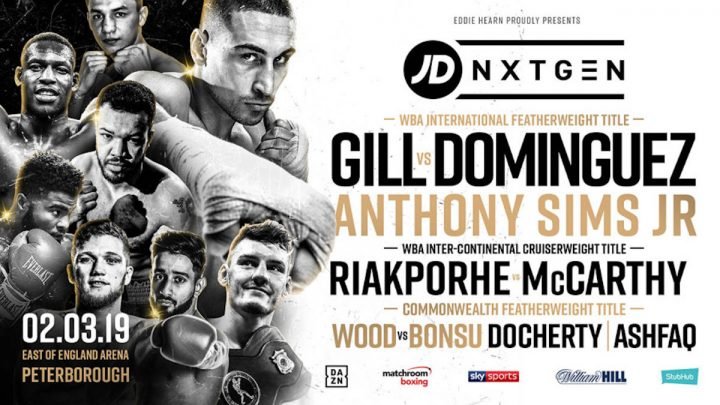 By Trevor McIntyre: Undefeated Jordan Gill (23-0, 7 KOs) crushed Emmanuel Dominguez (24-8-2, 16 KOs) by a third round knockout on Saturday night to capture the vacant World Boxing Association International featherweight title on DAZN on the JD NXTGEN bill at the East of England Arena, Peterborough.

Gill, 24, knocked Dominguez down twice in round three. The fight was stopped after Gill nailed a badly hurt Dominguez with heavy shots after he’d gotten up from the second knockdown in the third round. Referee Robert Williams stepped in and halted the fight to save the tough Mexican fighter Dominguez, 25, from getting knocked down a third time.

Dominguez was on shaky legs after the second knockdown in the round. The referee could have stopped it right then there, but he let the action continue for a little while longer until it was clear that the match needed to be halted. The official time of the stoppage was at 1:55 of round three.

Gill never showed much respect for Dominguez’s punching power in the fight, as he was charging him the entire fight, hitting him with combinations, and not letting up at all. Dominguez was getting hit with almost everything that was thrown his way in the fight. You’ve got to give Dominguez credit for showing the punch resistance to make it to the third round, because he was getting hit a lot.

After the fight was over, Gill made it know that he wants to fight for the European featherweight strap, which is currently held by EBU champion Jesus Sanchez (10-1, 3 KOs).

It’s still too early to tell how far Gill can go at the pro level. Although he looked good tonight against Dominguez, it might be a different story when he gets in there with the good featherweights like Oscar Valdez, Leo Santa Cruz, Josh Warrington, Gary Russell Jr., Joseph Diaz Jr., Shakur Stevenson and Carl Frampton. Gill will likely soon outgrow the featherweight division, and that would put him in guys like Gervonta ‘Tank’ Davis and Miguel Berchelt at super featherweight. Again, those are guys that might be a little too good for Gill, given his lack of punching power.

In other boxing results on the card, cruiserweight Richard Riakporhe (9-0, 8 KOs) defeated Tommy McCarthy (13-2, 6 KOs) by a fourth round knockout.

Undefeated junior middleweight Anthony Sims Jr. (18-0, 17 KOs) defeated Mateo Damian Veron (28-22-3, 8 KOs) by sixth round knockout. Matchroom Boxing promoter Eddie Hearn is excited about Sims Jr., and believes he can a world title soon at 154. We’ll have to see if that’s possible. Sims is going to need to get pushed up the rankings for him to have a chance of even getting a title shot, let alone winning a belt. Hearn might be a little too ambitious right now for Sim’s sake.