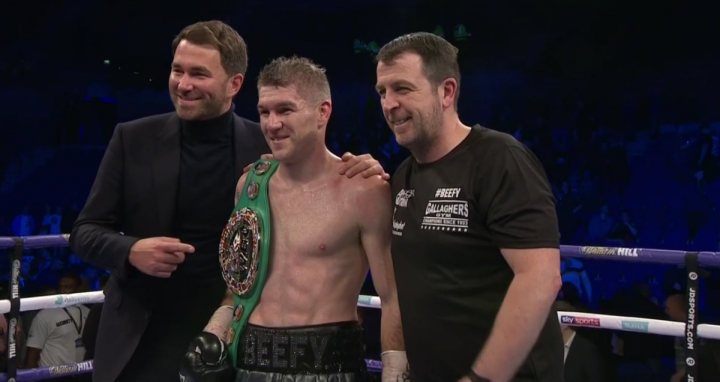 Smith, 30, was teeing off on a hurt Eggington in the fifth when referee Robert Williams stepped in and waived off the fight with the 26-year-old Eggington still on his feet and trying more or less to fight back.

Smith was too fast, too busy, too big and too powerful for Eggington tonight. It looked like a fight between a junior middleweight and a welterweight. Eggington lacked the size, power, speed and talent to compete with Smith, who was coming off of a 12 round unanimous decision loss to WBO junior middleweight champion Jaime Munguia last July. Smith had been saying for weeks that his goal is to fight a rematch with Munguia, who feels he’s better than, but it looks like his promoter Eddie Hearn of Matchroom Boxing has other ideas for him in positioning him to go after the WBC 154 lb title. Smith could be one fight away from earning himself a mandatory spot to face WBC champion Tony Harrison.

Eggington was getting plastered tonight in getting nailed with every shot that Smith was throwing at him. Eggington made it worse for himself by moving to the ropes, and trying to fight the bigger Smith from the position. Eggington’s trainer tried telling him not to do that, but he failed to follow the instructions given to him, he kept going back to the ropes again and again. Once Eggington was on the ropes, it was nearly impossible for him to work his way off of them, because Smith would push and shoulder him back to that spot. With the superior size that Smith had on his side, he was able to bully the weaker, smaller Eggington to keep him against the ropes.

With the victory, Smith won the vacant World Boxing Council Silver junior middleweight title. Afterwards, Smith’s trainer Joe Gallagher and promoter Eddie Hearn of Matchroom Boxing said that they’re interested in having Liam fight in a WBC 154 eliminator against #2 WBC Sergio Garcia (29-0, 13 KOs), who recently defeated Ted Cheeseman by a 12 round unanimous decision on February 2. Liam Smith isn’t ranked in the top 15, but since Hearn was able to workout a deal for him to fight for the WBC Silver junior middleweight title, he moves ahead of most of the other contenders in the WBC’s top 15 rankings.

Hearn also mentioned the possible options of Smith facing Jessie Vargas or Kell Brook. Hearn says Sergio Garcia, Vargas and Brook are all options for Smith. He wants to get Smith a world title shot against the winner of the rematch between WBC junior middleweight Tony Harrison and Jermell Charlo.

Although Smith was the home fighter and the guy that was the selling for the fight at the Echo Arena, the fight was so out of place on the card in terms of being a non-competitive mismatch on paper, it would have been better as the third fight from the main event, because it was horrible match-up compared to the the more entertaining bouts between Anthony Fowler and Scott Fitzgerald and David Price and Kash Ali.

It’s good news that Hearn isn’t going to match Smith against another Eggington level fighter. Smith’s too to be fighting this level of opposition. It’s unfortunate that Smith lost his previous fight to WBO junior middleweight champion Jaime Munguia last July, but that’s no reason for Hearn to bring him back to an elementary stage of his development by matching him against a non-contender like Eggington.

In a crazy fight, former British and Commonwealth heavyweight champion David Price (24-6, 19 KOs) was bit twice by his opponent Kash Ali (15-1, 7 KOs) in winning a fifth round disqualification. Ali reportedly is having his purse without due to the bite

The fight was stopped in the fifth round when Ali tackled the 35-year-old Price and bit hit hard on his midsection. The referee saw the bite and immediately stopped the fight. The shocked boxing fans booed the quick stoppage, not realizing that Ali had bitten Price. It looked to the fans that Ali had simply tackled the 6’8″ Price, and they didn’t feel that the contest should have been stopped for that reason. Moments later, however, it was learned that Ali, 27, had bitten Price in the midsection while he was down. The fight was stopped at 2:26 of round five. Boxing News 24 had Price winning all four rounds before the disqualification of Ali in the fifth.

Earlier in the fight, Ali bit Price on the arm in the second round. Ali was docked a point in round three for hitting Price with three punches to the back of his head in a row. In that same round, Ali had head-butted Price when he had him along the ropes. Ali also did this same move in round two. Moments before Ali tackled Price in the fifth, Price hurt him with an uppercut, that caused him to reach and grab him to keep him any additional shots. It was a smart move on Ali’s part to tie Price up and take him to the canvas. What wasn’t smart on Ali’s part was delivering a bite while Price was down. That move by Ali had a lot of boxing fans saying on social media that he wanted out of the fight, so he intentionally bit Price in order to be disqualified by the referee. After the fight, Ali surprisingly asked Price for a rematch, to which he immediately rejected the request, saying that he’s going to look to fight the winner of the Lucas Browne vs. David Allen fight.

Former IBF bantamweight champion Paul Butler (28-2, 14 KOs) defeated Fadhili Majiha (23-13-4, 10 KOs) by a closer than expected six round points decision by the score 58-56. Referee Steve Gray scored it for Butler, 30, by a narrow margin. The win for Butler was his second since losing to Emmanuel Rodriguez by a 12 round unanimous decision last May in a failed attempt to capture the vacant International Boxing Federation bantamweight title.

In a close fight, light welterweight Robbie Davies Jr. (18-1, 12 KOs) defeated Joe Hughes (17-4-1, 7 KOs) by a 12 round unanimous decision to capture the British and European light welterweight belts. The judges’ scores were 118-110, 115-113, and 115-114. This fight was arguably the most interesting match on the card tonight. There was a lot of back and forth action, and no biting and fouling like we saw in the David Price vs. Kash Ali fight. It was a more entertaining fight than the mismatch in the main event between Liam Smith and Sam Eggington.

Female lightweight champion Natasha Jonas (7-1, 5 KOs) had her way in defeating Feriche Mashauri (7-3, 2 KOs) by a six round decision to pick up her seventh victory. The fight wasn’t particularly competitive.