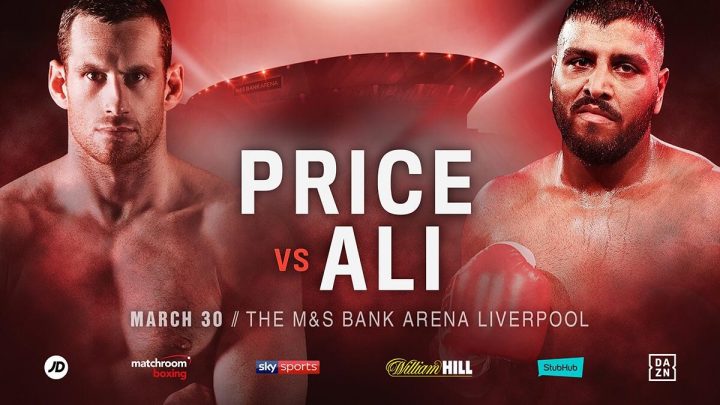 By Trevor McIntyre: David Price (24-6, 19 KOs) kept his career alive just barely in defeating previously undefeated Kash Ali (15-1, 7 KOs) by a 5th round disqualification win on Saturday night at the Echo Arena in Liverpool, England. Kash, 27, bit Price on the midsection in the fifth round after tackling him to the canvas after having been hurt by a big right uppercut to the head. With the dramatic win, Price can fight on.

Ali was out on his feet after taking the shot. He instinctively grabbed the tired looking 6’8″ Price to keep him from finishing him off. The two then went crashing to the canvas. While they were down, Ali bit Price on the midsection hard enough to leave red teeth marks on his skin. The referee Mark Lyson, who was on the top of the action, immediately waived the fight off, disqualifying Kash.

The official time of the stoppage was at 2:20 of round five.

It was an odd self-defeating move on Kash’s part to bite Price, as he looked exhausted and hurt moments before than when he was trapped against the ropes. There’s no telling what would have happened had Kash not bit Price. As tired as Price, 35, was, Kash would have had a chance to knock him out. Kash might not have realized how much of a chance he still had in winning.

Afterwards, as Kash walking back to his dressing room, someone from the crowd reportedly threw something at him.

“He was in the fight, he ruined it for himself,” Price said after the fight. “I’m not too pleased with my own performance. He said ‘let’s do a rematch’ but I don’t want to share the ring with an animal like that. The winner of Lucas Browne vs Dave Allen is one that I’m interested in.”

There wasn’t a lot of action in rounds one and two. Price got the better of it with him landing some solid right hands, but he was fighting at such a slow pace that he wasn’t able to dominate the action like he should have been able to given how poor his opponent was.

In round three, Price connected with some solid right hands that bloodied Kash’s nose. At one point in the round, Kash looked shaken. His eyes rolled around in his head after getting caught. Price failed to take advantage of it though. Ali looked like he was ready to be knocked out in the round if Price had flurried on him, but he failed to take advantage of the situation. A younger Price would have flurried to finish Kash, but not this version that looked like he was worried about gassing out. Ali lost a point for rabbit punching during the same round. There was also reports that Ali bit Price for the first time in the fight during the round.

The way that Price fought tonight, he’ll have problems if he faces Allen, who can punch, and he fights at a fast pace. Allen is beatable if Price can get to him early, but if he doesn’t, he might wind up getting knocked out by the 26-year-old.

The performance by Price was a mixed back. Although he got the win, he looked bad in gassing out in the fifth round and taking punishment against a fighter that looked very beatable. Price probably could have knocked Kash out in the first round if he attacked him with an all out flurry of shots, but he failed to do that. Price fought at a painfully slow pace, throwing mostly single right hands, left hooks and jabs. This allowed Kash to stay into the fight, and pick up confidence.

In round 4, Kash started to attack Price and he had success with landing some looping right hands. Price connected with a few big shots in the round, but he was starting to look exhausted.

“He is a disgrace for what he’s done,” Sky commentator Tony Bellew said about Kash after the fight. “Biting a man on the floor? There’s not many things lower. He should be banned.”

Tonight, Price was fighting a much lower level opponent than the ones he’s been facing lately in fights against Alexander Povetkin and Sergey Kuzmin. When a fighter is being matched so weakly against a domestic level heavyweight, you’re going to see stuff like the fouling that we saw tonight. Price wouldn’t likely have to deal with that if he were facing a world lass heavyweight, but he would have had a lot of problems if he were matched against a top tier heavyweight tonight. Price looked there to beat in round five after he gassed out. Ali was trying to finish Price off along the ropes when he got caught by a big right uppercut counter shot. Ali got sloppy in trying to finish Price, and he left himself open for a right hand counter uppercut that had him staggering. Price then went after Kash to finish him, but he was grabbed and tackled to the canvas. The rest is history. Kash bit Price on the midsection while they were down and the fight was subsequently stopped.

Price says he’s not going to give Kash a rematch. He says he’s going to take the win, as ugly as it was, and move on to try and fight the winner of the Lucas Browne vs. David Allen fight. Price is fighting for his career at this point. If he had lost tonight against Kash, it likely would have been over for him. That being said, a win for Price over the Allen vs. Browne winner will lead to an even bigger fight for him. Price can work himself onto an eventual big payday fight if he can keep winning long enough to get a title shot against IBF/WBA/WBO heavyweight champion Anthony Joshua. The way that Price was almost knocked out in the fifth round by Kash didn’t instill confidence in him that he can the job to keep winning for long.