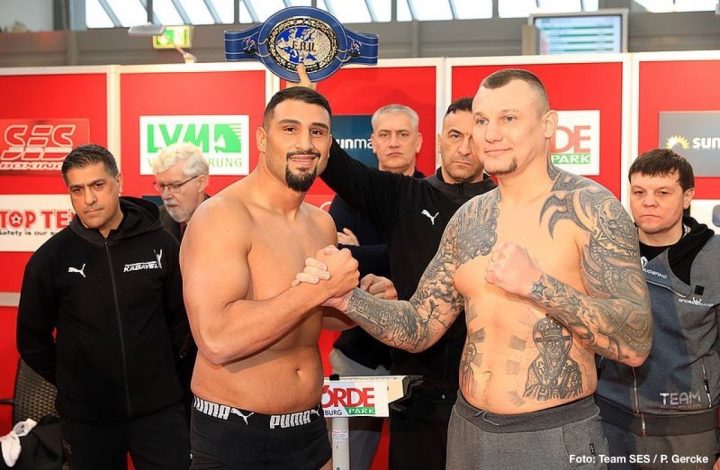 By Mike Smith: EBU heavyweight champion Agit Kabayel (19-0, 13 KOs) fought well in beating 35-year-old Andriy Rudenko (32-4, 20 KOs) by a 12 round unanimous decision in a successful title defense on Saturday night at the Maritim Hotel in Magdeburg, Germany. In the 6th, Kabayel knocked Rudenko down with a beautiful shot to the midsection that had him hurt.

Kabayel, 26, used movement and sharp punching to get the better of the tough Ukrainian Rudenko, who came into the fight having lost recently to Alexander Povetkin.

The judges scores were 116-111, 117-110, and 119-108. Boxing News 24 had Kabayel winning easily by a 119-108 score. He was too fast for the plodding Rudenko tonight. The early rounds were competitive, but Rudenko seemed to tired out as the fight progressed, and Kabayel was able to punch move all night long to win the fight by an easy decision.

Rudenko showed good punching power, but he wasn’t able to land enough of his shots to win more than a round or two. Kabayel fought a smart fight in catching Rudenko with shots, and then circling the ring to keep from getting countered. It wasn’t pretty to watch, but it was an effective style for Kabayel.

The win for Kabayel was his third successful title defense for his EBU heavyweight belt that he won two years ago over Herve Hubeaux. In Kabayel’s two previous defenses of his EBU belt, he defeated an unmotivated and overweight Dereck Chisora and Miljan Rovcanin.

Kabayel will likely get pushed up the heavyweight rankings with this win. He’s currently ranked IBF #3, WBC #8 and WBO #9. Kabayel’s not much of a puncher to speak of, so you can’t really give much chance of any chance of beating IBF/WBA/WBO heavyweight champion Anthony Joshua or WBC belt holder Deontay ‘Bronze Bomber’ Wilder if/when he’s given a title shot against one of them. However, the money that Kabayel can get in a title fight against Joshua would make it well worth it for him, even if he’s smashed by him, which would likely be the case.

In boxing action on tonight’s Kabayel vs. Rudenko card, highly ranked unbeaten #2 WBO heavyweight contender Tom Schwarz (24-0, 16 KOs) Kristijan Krstacic (17-2, 14 KOs) by a second round knockout. The big 6’5 1/2″ Schwarz knocked Krstacic down with a big right hand shot in the 2nd round. After the 38-year-old Croatian Krstacic got back up, Schwarz then nailed him with some follow shots to put him down a second time. Krstacic wearily got back up, and was dropped again. This time the fight was stopped. The official time of the stoppage was at 2:55 of round two.

It was a good performance by the 24-year-old Schwarz in beating a limited guy in Krstacic. Schwarz is in the same boat as Kabayel is in terms of talent. Schwarz is a good fighter, but he’s not someone that has much of a chance of upsetting IBF/WBA/WBO champion Anthony Joshua. The payday will make it well worth it for Schwarz once he gets that title shot. Joshua isn’t likely going to bother fighting Schwarz until he becomes the World Boxing Organization mandatory challenger, and only after the WBO orders the fight. There wouldn’t be any interest from fans in seeing Joshua fight Schwarz.