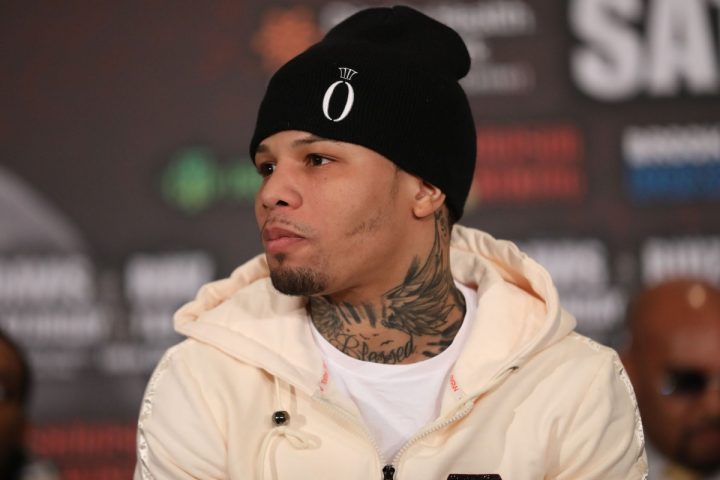 By Chris Williams: Eddie Hearn says he’s going to be offering Gervonta ‘Tank’ Davis a massive payday of $5 million to fight IBF super featherweight champion Tevin Farmer (28-4-1, 6 KOs) in a unification fight on DAZN. After hearing of the offer, Davis (21-0, 20 KOs) seems receptive to it.

“I made more than a Million 🤷🏻‍♂️ but I’m ready whenever wherever..I been ready to eat his food,” Tank Davis said on his Twitter in response to the news of Matchroom Boxing USA promoter Eddie Hearn wanting to offer him $5 million for the unification fight against Farmer.

“f***ing massive,” Hearn said an offer that he plans on giving Gervonta for a unification fight agains Tevin Farmer, as quote by Michael Benson.

Hearn later reportedly said he thinks $5 million would be a good offer for Davis.

Farmer, 28, isn’t much of a puncher, and he struggled to beat a guy that Gervonta easily beat in the past in Francisco Fonseca last December in needing to go the full 12 round distance against him. Davis stopped Fonseca in the eighth round two years ago. Hearn must know something that the average boxing fan doesn’t know when it comes to Farmer. On paper, Davis destroys Farmer within three rounds. If Hearn thinks that Farmer has the talent to beat Davis, he could be in for a big shock.

If it’s up to Gervonta, he might accept it. However, Davis’ promoters at Mayweather Promotions could have other plans for him, which don’t include a risky unification fight against Farmer. Floyd Mayweather Jr. recently said that Gervonta could be facing Japanese kickboxer Tenshin Nasakawa in an exhibition match for good money. If Mayweather decides that he wants to make a fight between Tenshin and Gervonta rather than a unification fight between Davis and Farmer, there’s not much that can be done. It would be a shame if Tank Davis didn’t take the unification fight against Farmer, because it would give him a shot at making a good payday, and he could fight a good opponent that would increase his popularity.

Mayweather Promotions would need agree to the Davis vs. Farmer fight, and it’s quite possible that they’ll veto that idea and instead have Gervonta fight a non-champion. Tank Davis’ last fight against replacement opponent Hugo Ruiz (39-5, 33 KOs) was a disappointment. Davis knocked out the 32-year-old Ruiz in the first round last month on February 9 at the Dignity Health Sports Park, in Carson, California. Davis was supposed to fight Abner Mares, but suffered an eye injury and had to pull out of the fight. Mares won’t be available anytime soon, so Mayweather won’t be able to reschedule that one for a while. It’s very likely we’ll see Davis and Mares fight each other. Some boxing fans still want to see those two despite Mares losing recently to Leo Santa Cruz.

It would be nice if Mayweather would let Davis take the fight with Farmer instead of having him milk his WBA title, and ending up with a career resume filled with no name opponents and exhibition matches. You could understand why some promoters would want to take that approach with fighters and champions that lack the talent to beat the best, but Gervonta isn’t that type of guy that needs to be protected by his promoters. He’s capable of beating the best if given the chance by Mayweather.

Farmer will be defending his International Boxing Federation super featherweight title against unbeaten #4 IBF Jono Carroll (16-0-1, 3 KOs) this Friday, March 15 at the Liacouras Center, in Philadelphia, Pennsylvania. This could be a tough fight for Farmer. Carroll is coming off of a 12 round draw against Guillaume Frenois (46-1-1, 12 KOs) last December in Sheffield, England. Farmer might have a lot of problems with Carroll. This is by no means an easy fight for Farmer. He could lose, and if that happens then he can forget about a big fight against Gervonta.