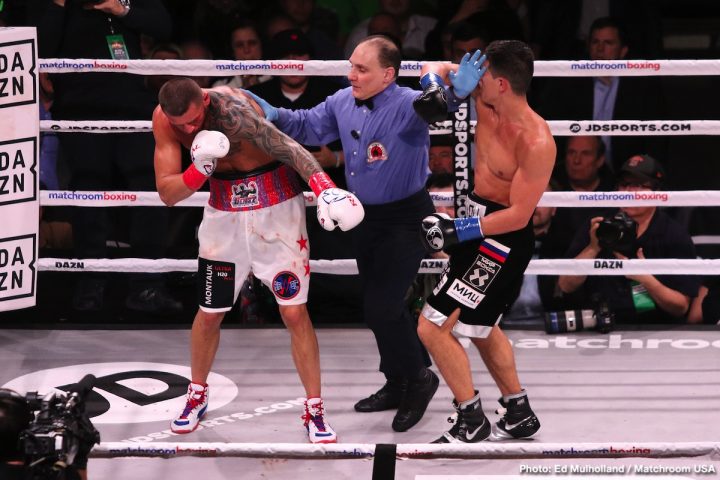 Bivol’s manager Vadim Kornilov reportedly wants the Kovalev fight to take place at the end of the summer, according to Michael Benson. WBA light heavyweight champion Bivol has a his mandatory challenger Marcus Browne (23-0, 16 KOs) that might need to take care of first in August, according to promoter Eddie Hearn.

Bivol vs. Browne is expected to be ordered by the World Boxing Association this week for August. The unification fights are given more weight typically than mandatory defenses for champions, so it’s possible that mandatory challenger Browne can be pushed to the side for now. Kovalev (33-3-1, 28 KOs) recently recaptured his World Boxing Organization 175 lb title last month in beating Eleider Alvarez (24-1, 12 KOs) on February 2 on ESPN at The Ford Center at The Star, in Frisco, Texas. It was a masterclass performance from Kovalev, who abandoned his normal slugging style of fighting, and adopted a new style of fighting on the outside.

Kovalev vs. Bivol won’t be an easy fight to get made due to both of them fighting on different network platforms. Kovalev, 35, is co-promoted by Top Rank Boxing, and he fights nowadays on ESPN. Bivol, 28, is with Matchroom Boxing USA and fights on DAZN. Although Bivol’s promoter Eddie Hearn said last Saturday night that he wouldn’t have any problems letting fight on ESPN for a big fight, it still could be a problem negotiating it.

Bivol (16-0, 11 KOs) successfully defended his title for the fourth time last Saturday night in defeating Smith Jr. (24-3, 20 KOs) by a 12 round unanimous decision on DAZN at the Turning Stone Resort & Casino, in Verona, New York. It was an interesting fight to watch because of the amazing boxing skills that Bivol showed. It was like watching a blend of Floyd Mayweather Jr. and Pernell Whitaker in looking at the defenisive moves of Bivol. He also fought a lot like a young former heavyweight champion Wladimir Klitschko with his footwork, and the way he defended the hard punches from Smith. The main difference between Bivol and Klitschko was the calmness that we saw from him. Wladimir used to get really nervous when he fight a pressure fighter. We didn’t see that from Bivol. He remained calm under fire the entire night. The judges scored it to Bivol by a 119-109, 119-109 and 118-110. It was close to being a shutout.

Bivol would have a speed advantage over Kovalev. That might be too much for Kovalev to handle if he couldn’t land a big shot. Given Kovalev’s shaky chin and his stamina problems, we could see a knockout in this fight if Bivol stepped on the gas to any great extent. Kovalev’s punching power, and boxing skills could be a problem for Bivol if he gets hit too much. Joe Smith Jr. might be a little bit bigger puncher than Kovalev, but he doesn’t have skills. Kovalev will land a lot more of his shots on the chin of Bivol compared to what we saw from Smith, who looked very simple out of the ordinary. Smith’s punching power has carried him a lot further than he would have gone if he had to depend on his skills alone.

This calling out business sounds nice, but it doesn’t mean we’re going to see a fight between Kovalev and Bivol anytime soon. Artur Beterbiev called out Kovalev following his win over Eleider Alvarez last February, and nothing has come of that. Kovalev said he would like to fight Beterbiev, but it’s not up to him to make his fights. If it’s up to Kovalev’s management to make the fight with Bivol or not, perhaps they might not want to. Kovalev can make good money for Top Rank Boxing by making simple title defenses over beatable opposition for two or three years rather than taking one big dangerous fight against Bivol, and losing. #1 WBO mandatory challenger Anthony Yarde could be Kovalev’s next fight. It’s an easy one that will make Kovalev a lot of money. It’s hard to imagine seeing Kovalev say no to this one in favor of a risky fight against Bivol that he could lose. Yarde is perfect Kovalev. His defense is poor, chin shaky, and he’s not experienced against good opposition.

Kovalev is someone that Bivol would have a very good chance of beating. You can’t say the same thing if Bivol faces Artur Beterbiev or Oleksander Gvozyk. Bivol could lose to both of those guys. That would be a major blow to Bivol’s boxing career if he gets beaten by one or both of those guys.