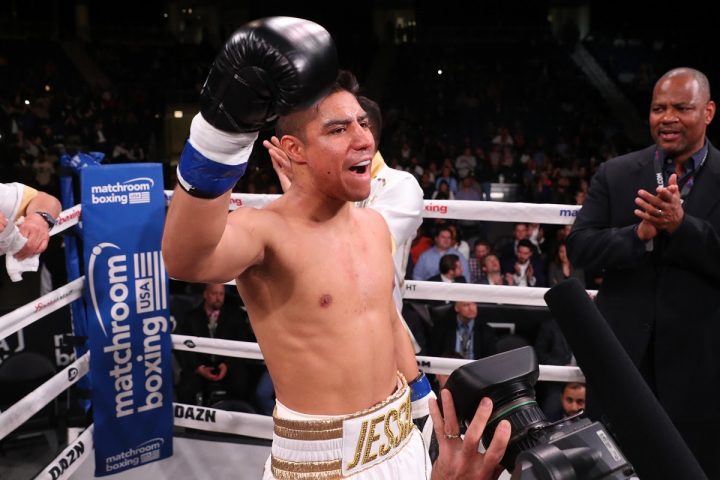 By Dan Ambrose: A catch-weight fight between former two division world champions Jessie Vargas (28-2-2, 10 KOs) and Humberto ‘La Zorrita’ Soto (69-9-2, 37 KOs) has been added to the April 26th card on DAZN headlined by Srisaket Sor Rungvisai vs. Juan Francisco Estrada II at The Forum in Inglewood, California. Vargas and Soto will fight at 151 pound catch-weight for their 10-round fight.

If Vargas beats Soto, then Matchroom Boxing will likely look to make a fight between Vargas and WBO junior middleweight champion Jaime Munguia (32-0, 26 KOs), if he wins his next fight against WBO mandatory Dennis Hogan on April 13.

Former two division world champion Soto, 38, recently pulled off an upset in beating Matchroom Boxing stable fighter Brandon ‘Bam Bam’ Rios by a 12 round unanimous decision last month on February 23 at the Auditorio Municipal, in Tijuana, Mexico. Matchroom promoter Eddie Hearn signed Rios hoping to put him in some big fights, but the smaller, weaker and older Soto cut short that dream by pulling off an upset in defeating Rios. If Soto can do the same thing to Matchroom fighter Jessie Vargas on April 26, Hearn probably won’t be too happy about it. Like with his fight with Rios, Soto is a much better fighter talent-wise than Vargas, who despite being a former two-division world champion, he’s never been mistaken for being a super talented fighter. Vargas has won his two division world titles by beating these guys: Khabib Allakhverdiev and Sadam Ali. You can argue those were what some boxing fans refer to as ‘belt-holders’ and not talented champions. Vargas won 2 division world titles, but he failed to show that he was of the best at 140 or 147. In contrast, Soto has won world titles at super featherweight and lightweight, and looked great in his fights.

Vargas vs. Soto is a good entertaining fight. It’ll likely be the third fight from the main event, as the co-feature bout is expected to be the super bantamweight unification match between Danny Roman and TJ Doheny. That fight is gong to be an exciting one from start to finish.

The 29-yer-old Vargas, a former two division world champion, needs a win right now, as he’s been win-less for the last two years of his career since 2017. Matchroom Boxing USA promoter Eddie Hearn signed Vargas, hoping to put him in with some big fights against Kell Brook, Liam Smith and WBO junior middleweight champion Jaime Munguia. But before Hearn can do that, he needs to get Vargas winning again, and that’s where the 38-year-old former 2-division world champion Humberto ‘The Crafty Little Fox’ comes in.

Vargas moving up to 154 at an odd time

Vargas wants the fight to be held at junior middleweight, as he’s now going to be campaigning in the 154 lb weight class. This is an odd move to say the least, because Vargas was never a puncher even when he was fighting at 140. Vargas’ power has never been good since moving up to 147 in 2015. In Vargas’ six fights at welterweight, he’s knocked out only one opponent in Sadam Ali. The other five fights for Vargas went the full distance. Vargas’ record at welterweight is 2-1-2. That’s not the best record for a fighter to be moving up to 154. Ideally, it would be better if Vargas had showed that he was dominating at 147 before moving up to a higher weight class where fighters punch harder, but that’s the way he’s decided to do it. Vargas will need to utilize his boxing skills more at 154 for him to thrive against the bigger punchers. Unless Vargas’ lack of power at 140 and 147 was due to him draining down in weight, he’s not going to be strong enough at junior middleweight to mix it with the big boys.

There’s no question that the 151 pound catch-weight will help Vargas. Soto didn’t look powerful in his fight last month against an arguably shot Brandon Rios at welterweight. Going up four more pounds to face Vargas at a 151 lbs is going to make it even tougher for Soto. He lacks the frame for him to be fighting in the welterweight division, let alone at junior middleweight. Eddie Hearn might have finally found someone that Vargas can beat after him coming up empty in his last two fights against Thomas Dulorme and Adrien Broner. Both of those fights were scored 12 round draws. There was nothing controversial about the results of those fights. Vargas simply didn’t do enough to get the wins.

“I’m excited for my return to the ring on April 26,” said Vargas about his ring return against Soto. “Humberto Soto is the opponent and I’m preparing accordingly with my coaches to give my fans an entertaining fight as always.”

If Vargas can’t hurt Soto, he’s going to have problems with his skills, movement and fast hands. Soto is approaching 40, but he’s still fast, and his ring IQ is incredible. Soto made Rios look really bad in beating him last month in Tijuana, Mexico. For Vargas to beat Soto, he’s going to have to either knock him out or outwork him, which might prove to be difficult to do, because he’s so good at slipping punches. Vargas isn’t known for having a high work rate. He’s a guy that fancies himself as a puncher, but he’s never been a hard thrower. Vargas’ biggest wins of his career have come against Sadam Ali, Antonio DeMarco and 140 Khabib Allakhverdiev. Vargas lost to Tim Bradley and Manny Pacquiao. He also fought to a 12 round draw against Thomas Dulorme and Adrien Broner. Vargas’ wins over Allakhverdiev and Anton Novikov were both controversial with many boxing fans seeing him as the loser of those fights.

“The challenge has been accepted and on April 26, I plan to come out victorious,” Vargas said.

The thing about Vargas fighting an older guy like Soto, whose best years were at super featherweight, is that if he doesn’t look good in beating him, he’s going to take a big hit in credibility from boxing fans. Likewise, if Soto beats Vargas, then it’s pretty much game over for him like with Rios. There are certain guys that a fighter like Vargas can afford to lose to, and Soto isn’t one of them. The writing is already on the wall for Vargas to start thinking about retirement after he failed to produce a win over Broner and Dulorme. Those were fights that Vargas could have lost and perhaps should have. He got some generous scoring by the judges in him getting a draw out of those fights instead of losses. Never the less, if Vargas gets beaten by Soto, it’ game over for him. Matchroom can keep Vargas on their payroll, but it’s hard to see what they can do with him. Perhaps Hearn can talk Brandon Rios out of retirement, and stick him and Vargas into the ring together. That wouldn’t be the Munguia fight that Vargas wants, but it’s about as good as it gets for him if he loses to Soto.

“This gives me extra motivation to prove everyone wrong again and to add a third loss to Vargas’ record,” Soto said.

Tony Harrison vs. Jermell Charlo rematch on June 23 on FOX »