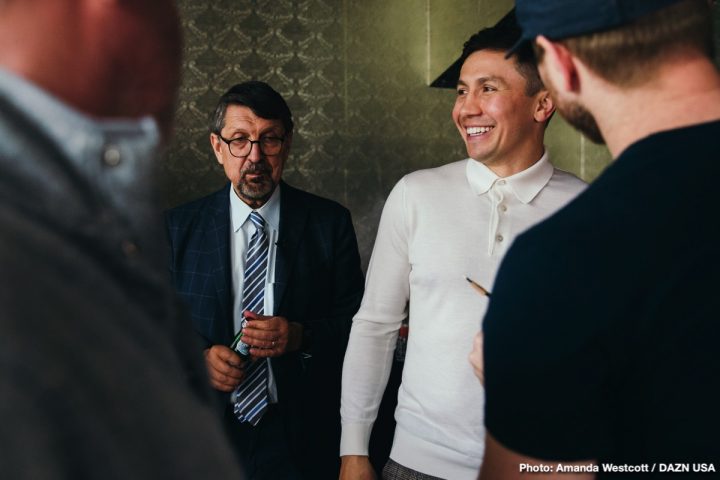 By Jeff Aranow: Gennady Golovkin (38-1-1, 34 KOs) says he wants the third fight with Saul Canelo Alvarez this September, if possible, but he’s not sure if Canelo will beat Danny Jacobs in their unification fight on May 4. GGG says Canelo (51-1-2, 35 KOs) might lose that fight, and then he won’t be able to battle him in a trilogy fight this September on DAZN.

Canelo will of course will want to avenge his loss to IBF middleweight champion Jacobs (35-2, 29 KOs) if he loses to him in two months from now. The third fight with Golovkin would be kicked down the road to May of 2020 or perhaps even later depending on how things go in a Canelo-Jacobs second fight.

“I hope so,” Golovkin said to Fighthub when asked if he wants to fight Saul Canelo Alvarez this September. Nobody knows. Maybe after my first fight, I can’t fight [Canelo]. Maybe Daniel beats him. Nobody knows. We talk a lot. We have a great deal [with DAZN]. Why not? If people want to watch, of course we’ll bring [Canelo vs. GGG trilogy],” Golovkin said.

A loss for Canelo to Jacobs will throw off the plans for a third Canelo-Golovkin match. As close as Jacobs fought Golovkin in their fight in 2017, anything is possible for the Canelo-Jacobs fight. Jacobs is one of those guys that do a lot of things, and given different looks. He can box, punch, move, and defend. Jacobs can also come on the attack and throw a lot of shots to get rid of his opponents in a hurry. Lately, Jacobs has become more defensive than he used to. His loss to Dmitry Pirog in 2010 had a profound effect on him in the way he fights. Before that fight, Jacobs was a guy that came forward looking to bang out his opponents in a hurry. Since losing to Pirog, Daniel has become more mobile, and defensive-minded.

Some boxing fans would argue that Jacobs’ cautious style of fighting is the reason he lost to Golovkin two years ago in their fight in 2017. Jacobs was too defensive in the first six rounds, and he fell behind by a wide margin, and was never able to make it up in the second half of the fight. If Jacobs is still fighting that way when he gets inside the ring with Canelo, then he’ll probably lose on points. Jacobs is fighting Canelo in favorite venue at the T-Mobile Arena in Las Vegas, Nevada, and that’s going to make it doubly tough on him to win a decision there, especially if Danny is fighting defensively.

Golovkin, 36, feels he made the right choice in signing with DAZN in a six-fight deal last week, and he’s looking forward to being involved in the biggest fights. Although there’s speculation that Golovkin’s first fight with DAZN will be a less dangerous opponent, he states that he’s ready to take on the best, and that’s all he wants. That’s good news for the boxing public, as they want to see GGG face WBO middleweight champion Demetrius Andrade in his first fight with DAZN in June. Andrade is signed with DAZN, he’s still unbeaten, and he doesn’t have an opponent for his next title defense in June. Golovkin will be fighting in June as well, so it’s a natural fight to get made.

With Canelo taking a risky fight with the hard-hitting Jacobs, it’ll look bad in the eyes of a lot of boxing fans if Triple G takes a lesser opponent. To please the fans, who are paying $10 per month to subscribe to DAZN, they’re going to want to see fighters like Canelo and GGG fight the best every tie out. DAZN Executive Chairman John Skipper seems to want to want the same thing from Canelo and Golovkin as the fans do. He wants to see those two face the best. If Andrade is considered one of the best in the middleweight by the boxing public, then that’s someone that makes sense for Golovkin to fight next.

DAZN will give me more chances,” Golovkin said about his reason for him signing with DAZN. “I’m open for everybody. I want a big fight.”

There are several good fights available to Golovkin now that he’s with DAZN. He’s got potential rematches against Canelo and Jacobs, which would be huge fights and would likely bring in a massive amount of subscribers to DAZN from the boxing public. Then there’s also a fight against unbeaten WBO middleweight champion Demetrius Andrade that would be there for GGG if he wishes to take the risk. WBA Super World super middleweight champion Callum Smith is also signed with DAZN, and that’s a match that might be appealing to Golovkin at some point. Golovkin’s trainer Abel Sanchez mentioned Callum as a guy that they would be interested in fighting in the future. WBA light heavyweight champion Dmitry Bivol is also with DAZN, and he says he would be open to moving down to 168 for a big fight against a champion. Whether Bivol would be excited at simply facing GGG in a fight without a world title on the line at super middleweight is unknown. Golovkin vs. Bivol would still be a great fight for the boxing world to see. 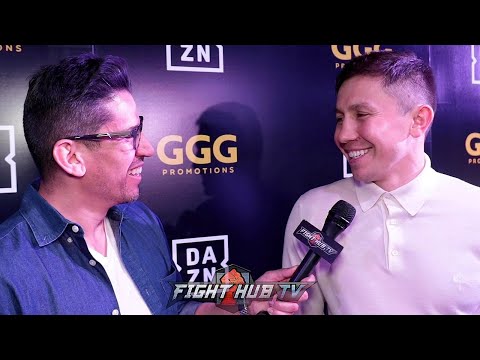 GGG wants Canelo even if he loses to Jacobs »