GGG wants Canelo even if he loses to Jacobs 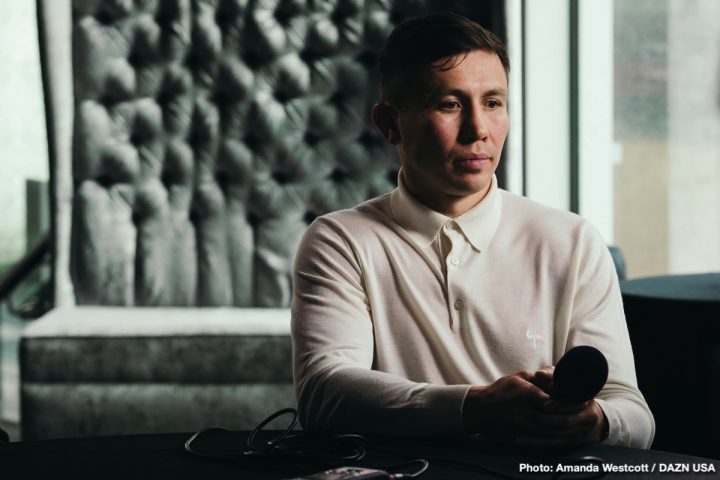 By Jim Dower: Former unified middleweight champion Gennady ‘GGG’ Golovkin will go be looking to get a third fight with Saul Canelo Alvarez later this year in September, even if the Mexican superstar loses his next fight to Daniel Jacobs on May 4, according to trainer Abel Sanchez. Golovkin has a new mindset about his career following his disappointing controversial 12 round majority loss to to Alvarez on September 15 last year in Las Vegas, Nevada.

No longer is GGG focused on winning world titles and unifying the middleweight division. Golovkin’s new career focus is on fighting the best possible fights against best in boxing. The reason for that is simple. Golovkin notes that in a lot of cases guys that hold world titles aren’t always the best talents. They’re belt holders, and not the best. GGG prefers to fight the best each time out rather than waste time fighting champions that aren’t considered to be the best.

“As Gennady said,’This is not about the belts. This is about fighting the best that are out there,'” trainer Abel Sanchez said to Fighthub in explaining GGG’s new philosophy of taking on the best possible opponents to give boxing fans the fights they want to see rather than going after champions in less interesting fights. “If Jacobs beats Canelo, then Canelo is still the front runner to fight Golovkin, because I think the two fights prior to that calls to that. Regardless of what happens in that fight, Canelo is the fight [for Golovkin in September], if given the choice between those two guys [Alvarez and Jacobs]. Canelo is the fight that’s going to happen regardless,” Sanchez said.

Canelo, 28, is a proud fighter, and he might not like the idea of moving on to face Golovkin in a third fight if he loses to Jacobs on May 4. It might be hard for Canelo to temporarily walk away from the defeat to Jacobs. The handlers for Canelo, Golden Boy Promotions, would probably be interested in putting together the Canelo-GGG III trilogy fight regardless of what happens on May 4, but they’re not the ones that will make the call. Canelo is the decider of who he fights, and he likely won’t want to move away from the Jacobs rivalry if he tastes defeat against him. In Canelo’s only career defeat at the hands of Floyd Mayweather Jr., he wanted to avenge that loss right away. Canelo might not want to walk away from a loss to Jacobs. Under those circumstances, Golovkin would need to wait until possibly December, if Canelo’s open to fighting three times this year, before he can face him again in a trilogy fight. If not, then GGG could be waiting until May of 2020.

IBF middleweight champion Daniel Jacobs (35-2, 29 KOs) is an excellent fighter, but Golovkin (38-1-1, 34 KOs) already defeated him by a 12 round unanimous decision in 2017. While there is some interest from hardcore boxing fans in a rematch between Gennady and Jacobs, there’s no demand for that fight from the casual fans in the U.S and elsewhere. The fans want to see Golovkin fight Canelo Alvarez again. As Sanchez points out, it really doesn’t matter if Canelo loses to Jacobs in their fight on May 4. The boxing public still wants to see GGG and Golovkin fight in a third match. That’s not to say that Triple G and Jacobs won’t end up fighting each other again. Golovkin’s new six-fight contract with DAZN means that he’s going to have a lot of opportunity to face Jacobs in a second fight, especially given that the 32-year-old New York is also signed with DAZN. But it’s more important for GGG to face Canelo in September, as the demand is still red-hot from the fans in seeing those two face each other. In September, it’ll have been 12 months since Canelo defeated Golovkin by a 12 round majority decision by the scores 115-113, 115-113 Alvarez and 114-114. Gennady and Canelo dare not wait longer before fighting each other, as the fans might forget about their two previous fights against each other. Ideally, Canelo and Golovkin should be fighting each other on May 4, but GGG was without a network platform, and needed to negotiate a deal with DAZN. All that took time.

“People understand a lot of politics about all the belts,” Golovkin said. “The idea is not to have all belts possible, but it’s to be best boxer and sometimes people with belts are not the best boxers.”

Canelo is expected to defeat Jacobs, so there’s little chance that the Mexican star will be coming into the GGG trilogy fight off the back of a loss. Canelo and Golovkin need to do their part in winning their next fights to make their trilogy fight in September a huge event for DAZN.

Golovkin wants to take the best possible fights, which could see him face anyone in the middleweight division, provided that they’re open to fighting on DAZN. That might limit Golovkin’s options. We’ll have to see. Demetrius Andrade, the WBO middleweight champion, is one guy that is a possibility. Sanchez mentioned WBA super middleweight champion Callum Smith as another possibility for GGG.