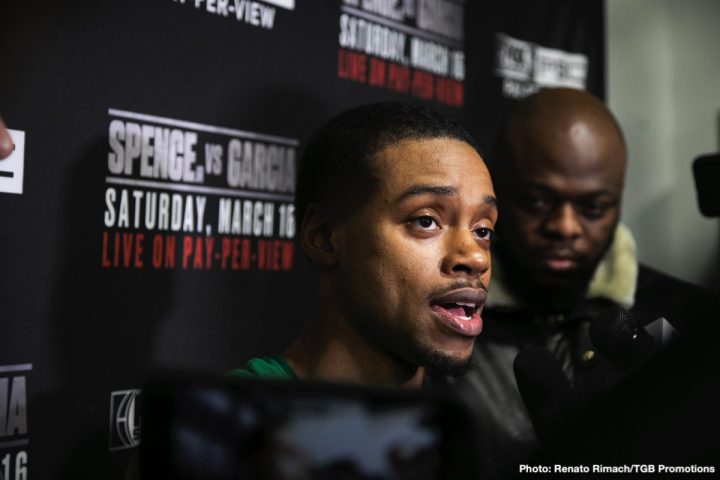 Mikey is moving up two weight classes from 135 to 147 to face a large welterweight in Spence, who some feel he should be fighting at junior middleweight. As such, Mikey is moving up three weight classes in real terms in facing a guy, Errol Spence, that has been obliterating his competition at welterweight since he turned pro seven years ago. It doesn’t look good for Mikey Garcia unless he can pull off a magic act on Saturday to negate Spence’s size advantage.

“What will happen this weekend. Mikey is a terrific fighter, a great boxer and everything, but Spence is a welterweight and a BIG welterweight, and Mikey has nothing to hold him off with,” Top Rank Boxing promoter Bob Arum said to Fighthype in analyzing this Saturday’s match between Spence and Garcia. “Manny [Pacquiao] was able to beat bigger guys at one small point in his career. Who did he fight bigger? One guy, [Antonio] Margarito, bigger than 147, but he never went above 147 except that once with Margarito. Lomachenko is fighting guys at 135 that are all bigger than he is. [Jorge] Linares was bigger than he was. [Jose] Pedraza…but that’s the highest weight he’s fighting at,” Arum said.

Arum brings up a good point in comparing what Mikey is trying to do in fighting Spence to what Manny Pacquiao did during the zenith of his boxing career when he fought at welterweight. Pacquiao didn’t fight too many big guys that possessed talent when moved up to welterweight in 2008. Pacquiao did fight the 5’10” Oscar De a Hoya, but he was old, weight drained, and not the fighter he’d once been. Other than De La Hoya, Pacquiao’s only fight against a large welterweight was against the 5’11” Antonio Margarito in 2010. Margarito was very slow of hand and foot, and not the biggest puncher.

Margarito used to win his fights by throwing nonstop punches with his high volume attack. Margarito would overwhelm guys by throwing over 100 punches per round. There weren’t too many fighters in the 147 lb weight class that could handle dealing with that many shots. So what Arum is saying is Pacquiao didn’t fight a solid big guy like Spence during his best years at 147. What Pacquiao had going for him though in moving up to 147 was his blistering hand speed, high punch output and his mobility. Pacquiao would come after his bigger opponents using angles, and would overwhelm them with his speed and punch volume. Mikey doesn’t have any of those things going for him. He’s not super fast, he doesn’t use angles, and he doesn’t throw a lot of punches. Mikey is very selective in the shots he does throw. He’s been able to get away with fighting like that because of his power in the weight classes in fighting at 126, 130 and 135. In moving up to 147, Mikey’s power isn’t expected to carry up to that division. We didn’t see incredible power from Mikey in his two fights at 140 against Sergey Lipinets and Adrien Broner. It stands to reason that Mikey’s power at 147 will be even less noticible. With Mikey’s low work rate, he’ll just be another one of the many welterweights that don’t throw a lot of punches. That’s going to put Mikey at a huge disadvantage against Spence in just that one area alone. When you factor in that Mikey will be fighting a guy that is much bigger, stronger and throws a lot of body shots, which he hasn’t had to experience during his career, it doesn’t look good for him. Arum sees a bleak situation for Mikey.

“I would be very, very surprised [if Mikey beats Spence],” Arum said.

What Mikey Garcia is about to do in fighting Spence is almost absurd as far as how much out of his comfort zone he’s going. It doesn’t look good for Garcia, 31, because he doesn’t have the size, power, speed or the experience at welterweight that would give him a fair shot at winning this fight.

“We would be very happy to do that fight,” Arum said about a fight between Spence and Crawford. “If Crawford gets by [Amir] Khan, which I hope he will on April 20th, we want to do that fight. We’ll sit down and negotiate a fair deal and do that fight next. This thing is stupid. When FOX lists the best welterweight in the world and doesn’t have Crawford’s name on it, I mean, give me a break. FOX network is not supposed to be FOX News, which you know everything is crap. Absolutely [Spence vs. Crawford is a big enough fight to happen next],” Arum said.

It would be good for boxing to see Crawford face Spence after their next fights. Crawford (34-0, 25 KOs) will be defending his World Boxing Organization 147 lb title next month against former light welterweight champion Amir ‘King’ Khan (33-4, 20 KOs) on April 20 on ESPN pay-per-view at Madison Square Garden in New York. Crawford, 31, is a huge favorite to win that fight. of course. A fight between Crawford and Spence will almost surely happen, but not next. Spence is with Premier Boxing Champions, and they’re likely going to match Errol against WBC welterweight champion Shawn Porter next if everything goes well this Saturday for the Spence-Garcia fight. If Errol, 29, beats Garcia, as Arum predicts, we’ll likely see Spence vs. Porter in the summer.

Porter has already said that he’ll be at the Spence vs. Garcia fight this Saturday night, and he plans on entering the ring afterwards to challenge the winner. That’s going to be a good fight. There’s also a chance that Spence could fight WBA ‘regular’ champion Manny Pacquiao next. If the Filipino star is interested in fighting Spence, then that match will get made next ahead of the Porter fight. Crawford will likely need to wait until Spence fights Pacquiao, Porter and Keith ‘One Time’ Thurman. Those are the big three fights for Spence with Premier Boxing Champions. Once those guys are out of the way, and there’s no lingering controversy about the outcome of those fights, then Crawford would be the logical choice for Spence. It would be the end game for Spence at 147. If Spence beats all of those fighters, including Crawford, there would be no one left for Spence to fight. He would then likely move up to 154 to campaign as a junior middleweight if the division has anyone worth fighting. Right now, there aren’t too many big names at junior middleweight that would make it worthwhile for Spence to move up. If Spence was with DAZN, he could move up to 154 and potentially fight middleweights like Saul Canelo Alvarez, Gennady Golovkin, Jaime Munguia, Daniel Jacobs and Demetrius Andrade. Spence isn’t with them though. If he moves to 154, Spence would be limited to guys like Tony Harrison, Jermell Charlo and Jarrett Hurd. Charlo might not even be an option for Spence, because those guys are friends, and they spar on a regular basis. Munguia is with DAZN, so he’s not an option for Spence.

Luke Campbell vs. Ryan Garcia have reached an agreement for November fight on DAZN267 Total Shares