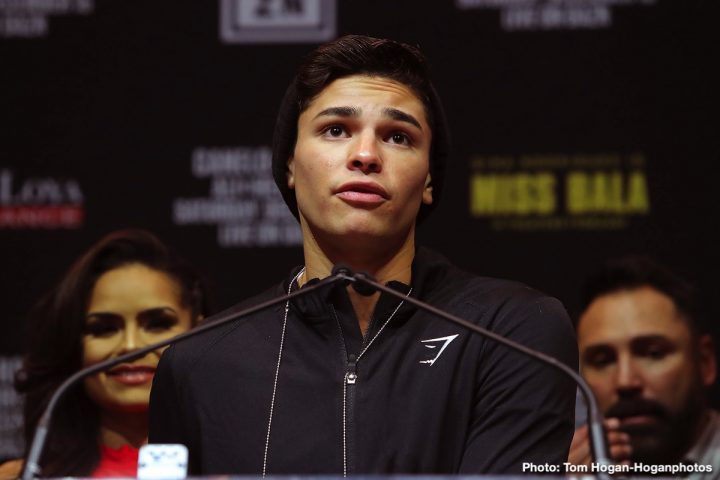 By Dan Ambrose: Unbeaten lightweight contender Ryan Garcia was attendance for WBA Super World super featherweight champion Gervonta ‘Tank’ Davis’ 1st round knockout victory over Hugo Ruiz last Saturday night. Garcia, 20, says he saw enough of Tank’s performance for him to feel VERY confident of his chances of beating him when the two of them face each other in the future.

Garcia (17-0, 14 KOs) says he noticed that Davis was telegraphing his shots, and that he could see them coming. Garcia thinks he can get out of the way of Gervonta’s shots. With Garcia’s defensive skills, height, reach and his boxing ability, he might give Tank Davis a run for his money.

Although the fight was supposed to have been a competitive one, Gervonta destroyed former WBC super bantamweight champion Ruiz (39-5, 33 KOs) in a lightning quick first round TKO on SHOWTIME Championship Boxing at the Dignity Health Sports Park, in Carson, California.

“It was too quick, bro. That’s alright,” Ryan Garcia said to Fighthype about Gervonta Davis’ fast 1st round knockout victory over Hugo Ruiz last Saturday. “You got to wait and see for that,” Garcia said when asked when he’ll be facing Gervonta.

Garcia is promoted by Golden Boy Promotions, and they’ve not given a timeline for when they want to pull the trigger in making a fight between him against the 24-year-old Tank Davis. The way that Ryan looked in against Carlos Morales (17-4-3, 6 KOs) last September, it would be a good idea for Golden Boy to let him get some more experience under his belt before they let him take the fight with Gervonta.

Garcia had a great deal of trouble in beating the 29-year-old light hitting Morales by a 10 round majority decision. Morales was taking the fight to Garcia in the second half of the contest. The fight was a lot closer than the scores from two of the judges, who gave it to Garcia 98-92, 98-92. The third judge appeared to have his eyes open in scoring in 95-95, which is what Boxing News 24 scored it. Garcia didn’t lose the fight, but clearly didn’t do enough to win it. Morales would likely be destroyed by Gervonta if the two of them faced each other.

“But after seeing him fight live in person, I’m even more confident [of beating Gervonta Davis], because you can see the shots coming,” Ryan Garcia said. “He shows you what you can do. He kind of telegraphs sometimes. But like I said, he’s a good fighter. He’s fast, and he’s smart. I would love that fight. That wold be a good fight, man,” Garcia said.

Mayweather Promotions would be very interested in a Gervonta vs. Ryan Garcia fight if Golden Boy Promotions were to give them the word that they want to make that match-up. Even though Ryan Garcia still isn’t that well known with the casual boxing fans, a fight between him and Gervonta would attract a great deal of interest from hardcore boxing fans, and that in turn would get the casual fans interested in the contest. Unfortunately, Davis vs. Garcia is probably three to four years away depending on how Ryan continues to progress. Golden Boy Promotions wants to turn Garcia into a star slowly by building his popularity fight by fight. Garcia has a huge following on social media, and he’s able to reach a lot of fans with his Tweets and Instagram posts. It doesn’t matter that Garcia still hasn’t fought anyone good enough for him to be deserving of his fan base, he’s still popular nonetheless.

Garcia is now being trained by Saul Canelo Alvarez’s trainers, Eddy and Chepo Reynoso, and he’s hoping to continue to improve with them guiding him. It’s going to take a long time before boxing fans find out whether Garcia is the real thing or just a product of hype.

Garcia, 20, believes that he’ll beat Davis when the two of them face each other.