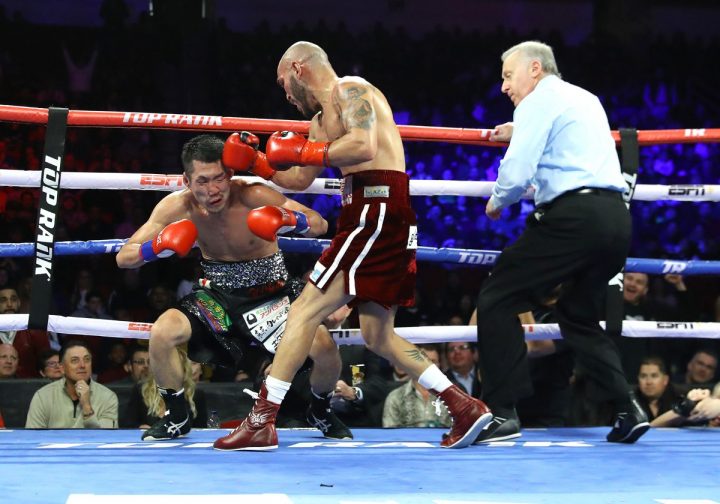 Beltran 37, knocked Okada down with a hard right hand to the head in the ninth round. Okada wearily got back up, and was knocked down a second time. Referee Jack Reiss then did the sensible thing in stopping the fight. The time of the stoppage was at 2:09 of round nine. Beltran had knocked the 29-year-old Okada down earlier in the fight in the 2nd round. However, in the same round, Okada came back to hurt Beltran.

In the first half of the fight, Beltran was getting the better of the Japanese fighter with his steady pressure and hooks to the head and body. However, Okada came bat at midpoint in the fight to start taking over the contest. It looked like Okada was on his way to winning the fight when he was hurt in the ninth round by a big right hand from Beltran.

All in all, it wasn’t the best performance from Beltran at his new weight at 140. He’s not the same fighter at light welterweight that he was when he was fighting at lightweight [135 lbs]. Beltran doesn’t look like he belongs at light welterweight due to his lack of size and power in comparison to the top guys in this weight class. Beltran will be alright as long as Top Rank doesn’t put him in with any of the talented light welterweights like Regis Prograis, Jose Ramirez, Ivan Baranchyk, Kiryl Relikh, Maurice Hooker or Josh Taylor. If Beltran fights any of those guys, he’ll likely lose.

One good thing about Beltran moving up to 140, he can fight a rematch against Ricky Burns in this weight class. Matchroom Boxing promoter Eddie Hearn wants to put together a rematch between Burns and Beltran. 140 would be a good weight class for them to face each other.

Undefeated featherweight Carlos Castro (22-0, 9 KOs) looked sharp in defeating former 126 lb world title challenger Genesis Servania (32-2, 15 KOs) by a one-sided 10 round unanimous decision. The scores were 99-9, 100-90 and 98-92. Boxing News 24 scored it 98-92 for Castro. It was a good performance from him in beating an excellent fighter in Servania, who gave WBO featherweight champion Oscar Valdez a lot of problems in losing a 12 round decision to him in September 2017. Servania knocked Valdez down in the 4th round in that fight.

Light welterweight journeyman Cristian Coria (29-7-2, 13 KOs) stopped the hard hitting slugger Joel Diaz Jr (24-2, 20 KOs) by a 3rd round knockout. Coria caught Diaz Jr. with a big left left to the head to knock him out in round 3. Diaz Jr. had lost two years ago to Regis Prograis by a 2nd round knockout. Since that fight, Diaz had fought just once in beating Miguel Angel Huerta by a 1st round knockout last October. Inactivity might have been an issue for Diaz Jr. He hasn’t been fighting enough, and he was facing a game fighter in Coria tonight.