Richard Commey to have MRI on injured hand, Lomachenko fight in jeopardy 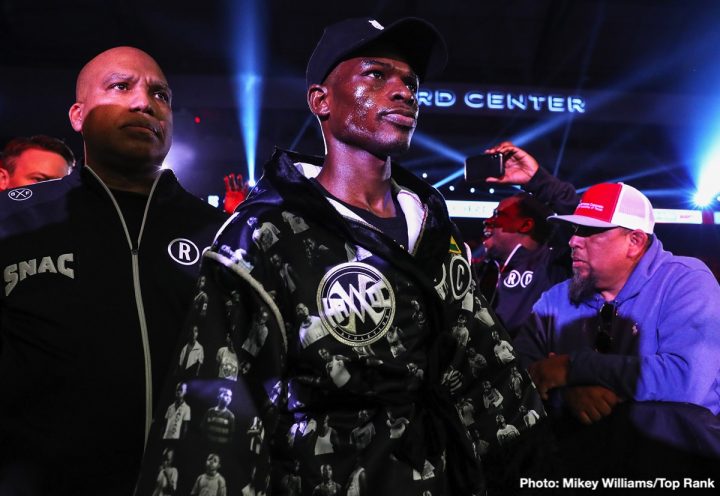 By Mike Smith: Richard Commey (28-2 20 KOs) suffered a right hand injury last Saturday night while in the process of beating Isa Chaniev (13-2, 6 KOs) by a 2nd round knockout to win the vacant IBF lightweight title. It’s unclear whether the injury will heal in time for him to face WBA/WBO champion Vasyl Lomachenko (12-1, 9 KOs) on April 12 at the Staples in Los Angeles, California. This will be streamed on ESPN+ if it takes place.

That’s a date that Top Rank has already booked for a unification fight between Commey and Lomachenko. They might have to make other plans if Commey, 31, is unable to fight on that date.

If Commey can’t face Lomachenko on April 12, then Top Rank will have Loma either move to a later date to accommodate his injury or they’ll match him against 32-year-old former World Boxing Association lightweight champion Anthony Crolla (34-6-3, 13 KOs). The U.S fans wouldn’t be excited about seeing Lomachenko fight Crolla, but the UK boxing fans would. The unification fight between Lomachenko and Commey would take place after Loma beats Crolla.

The U.S fans want to see Lomachenko fight exciting lightweight contender Teofimo Lopez (12-0, 10 KOs), but it’s unclear whether Top Rank will put those two together. They’re better off keeping them separate so that they can have two stars instead of one. Lopez would be very tough on a guy like Lomachenko, who can’t punch at lightweight. Since moving up to 135, Lomachenko has been winning his fights with his high work rate. Against Lopez, that could get Lomachenko hurt, because he would get hit by him. Lopez doesn’t need to land a lot of punches for him to do damage to his opponents. Top Rank wants to have Lomachenko stay on top for as long as possible. They won’t be able to do that if they put him in with Teofimo Lopez and he winds up getting chewed up by the young 21-year-old New Yorker.

Commey suffered the injury to his right hand in the second round when he twice dropped the little known 26-year-old Chaniev to claim the vacant International Boxing Federation 135 lb title on the undercard of the Eleider Alvarez vs. Sergey Kovalev II card at The Ford Center at The Star, in Frisco, Texas.

Commey saw a specialist on Tuesday to have his injured right hand looked at.

“There seems to be an issue with a ligament on his right hand, his right knuckle,” Commey’s promoter Lou DiBella said to ESPN.com. “The doctor will review everything and give us a prognosis about whether he will be able to fight on April 12.”

The doctor is expected to make a diagnosis by this Thursday, and come up with a timeline for when Commey’s injured right hand will be healed.

Three years ago, Commey lost to Robert Easter Jr. by a 12 round split decision in a failed attempt to win the vacant IBF lightweight title in 2016. Commey lost his next fight after that to Denis Shafikov by a 12 round split decision in December 2016. Since then, Commey has won four straight, beating Hedi Slimani, Alejandro Luna, Yardley Armenta Cruz and Isa Chaniev. The one them that runs constant is all four of those fighters were less than talented guys. If Commey had to fight Lomachenko or one of the talented lightweight contenders like Luke Campbell, Teofimo Lopez or Devin Haney, he likely would have lost last Saturday night in his bid to win the vacant IBF 135 lb title.

This was the IBF belt that Mikey Garcia recently vacated after the IBF ordered him to defend it against Commey. Garcia had no interest in defending the title against Commey, so he gave it up rather than be tied down to a fight that wouldn’t interest the boxing public. Lomachenko doesn’t mind though. He’s interested in collecting all the lightweight titles to show the hardcore fans that he’s the best fighter at lightweight.

In this day and age, it’s not worth unifying divisions unless your a fighter that lacks a fan base, and has no other way of increasing your popularity. Lomachenko would be better off fighting the guys that the boxing fans want to see him fight like Miguel Berchelt, Oscar Valdez, Gervonta ‘Tank’ Davis, Alberto Machado, Tevin Farmer, Miguel ‘Mickey’ Roman, Francisco Vargas, Mikey Garcia, Ryan Garcia, Josh Taylor, Teofimo Lopez and Jose Ramirez. Wasting time fighting Commey won’t increase Lomachenko’s popularity.

If Commey’s injured hand doesn’t heal quickly, it’s going to be difficult for him to go through training camp to get ready for the April 12 unification fight against Lomachenko. With the fight being so close together, Commey has no time to rest up before he needs to start his training camp to get ready for the unification fight against the two-time Olympic gold medalist Lomachenko.

It’s believed that Lomachenko will try and stay at lightweight long enough to unify the division before moving back down to super featherweight. Lomachenko takes too much punishment at lightweight, and his power isn’t good enough for him to knockout the top guys in this division. If Lomachenko mixes it up with one of the power punchers at lightweight like Mikey Garcia or Teofimo Lopez, he could get hurt by him. It would be ideal for Top Rank if Mikey vacates his WBC lightweight title or gets stripped by the World Boxing Council. That would allow Top Rank to setup a unification fight between Lomachenko and whoever emerges as the champion for that belt Lomachenko would then win the WBC belt, and probably move back down to super featherweight.