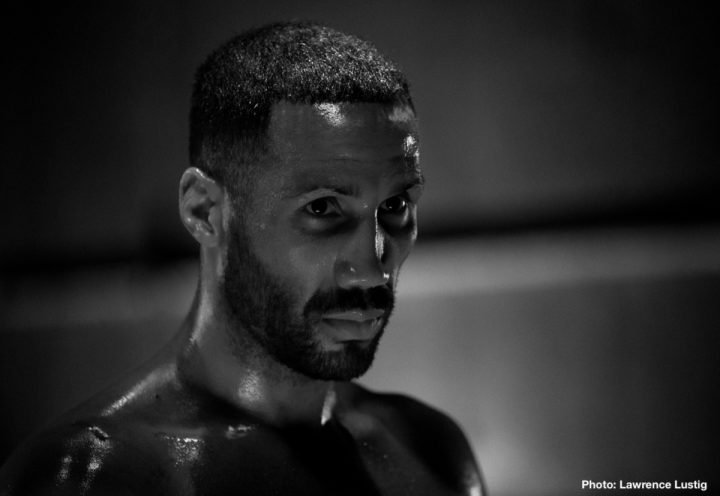 By Scott Gilfoid: A bitter sounding Carl Froch really let James DeGale have it in commenting on the news of his retirement from boxing on Thursday after 10 years as a pro. Rather than former IBF/WBA/WBC super middleweight champion Froch (33-2, 24 KOs) smothering former two-time IBF 168 lb champion DeGale with niceties the way that many fans have been doing all day, Froch said to talksports that he would have “smashed him to bits” had they fought each other before he retired in 2015.

The fact that Froch vacated his IBF super middleweight title in February 2015 when he was supposed to defend against DeGale doesn’t sit too well with fans, since it looked like Carl ducked the the talented fighter during the zenith of his career. Back in 2015, DeGale was arguably the best fighter in the super middleweight division, and Froch opted to vacate his IBF title rather than face him.

“He was mixing it with the best, but he got found wanting right at the top,” Froch said to Talksports.com in giving his sendoff thoughts on DeGale’s retirement. “If we’d have met in my career, I’d have been too strong for him, I’d have backed him up onto the ropes, he’d have sat there with his guard up and I’d have absolutely smashed him to bits.”

Oh my, look at this. It sounds like Froch is still smarting a bit about being perceived by some boxing fans as having royally ducked DeGale when he was at his best. It’s too bad Froch can’t just forget about it. There’s nothing that can be done about talking about DeGale now. All we know is when the fight was in front of him, Froch choose to vacate his IBF title rather than defend it against DeGale, who was an unstoppable force in 2015. This is so sad how bitter Froch is. If he had just taken the fight with DeGale back in 2015 rather than vacating his IBF title to avoid tangling with him, he would come across as more credible. But when you give up your title to avoid a fighter, you can’t reinvent history by saying what you ‘would have and could have done’ to them if the two of you would have fought.

All we know is DeGale was breathing down Froch’s neck, pushing for the title shot for his IBF super middleweight title, and Carl vacated the belt instead of taking the fight. Whatever Froch says now is meaningless, because he didn’t face DeGale when he had the chance. Froch was on the precipice of greatness in 2015, but chose to vacate his IBF title rather than face DeGale. Froch talking about it now doesn’t change what happened. All we know is DeGale wanted it, and Froch wasn’t up to it to take the fight, so he vacated his IBF strap rather than risk his hide fighting James and potentially losing. Let’s be real; DeGale’s fighting style was ALL WRONG for Froch. DeGale was another Andre Dirrell with the way he fought back in 2015, and he likely would have royally clowned Froch and sent him into retirement with a loss instead of his two wins over the green George Groves.

To reinforce his belief that he would have beaten ‘Chunky’ DeGale (25-3-1, 15 KOs) had they fought each other four years ago in 2015, Froch points out that defeated George Groves twice by knockout in 2013 and 2014, and that Groves defeated DeGale in 2011 by a 12 round majority decision. That sounds good, right? Wrong. Groves’ win over DeGale was a controversial one in which the crowd applause might have resulted in the judges giving George a win that he didn’t rate. Gilfoid scored the DeGale-Groves fight in DeGale’s favor. DeGale took over the fight from the fifth round, and dominated the last eight rounds of the fight. In a sign that DeGale was a better fighter than Froch, he did a much better job of beating Andre Dirrell than Carl did. DeGale defeated Dirrell by a clear 12 round unanimous decision in May 2015. Yeah, the fight was close, but DeGale clearly beat Dirrell after knocking him down twice in round two. On the flip-side, Froch’s 12 round split decision victory over Dirrell in October 2009 was considered a hometown decision in the eyes of a lot of boxing fans. Froch beat Dirrell in Showtime’s Super Series tournament in Nottingham, England. Just going by the way that Froch was given a controversial decision win over Dirrell, you can easily argue that DeGale was the better fighter than Froch, and would have beaten him had the two fought each other.

Froch brought up DeGale’s recent loss to Chris Eubank Jr. last weekend as further proof that he was a better fighter than him, because Eubank Jr. was beaten by Groves in the World Boxing Super Series tournament last year in February 2018. Unfortunately, Froch’s point is absurd and meaningless, because the DeGale that lost to Eubank Jr. wasn’t the same fighter that had ruled the super middleweight division in 2015. DeGale hasn’t been the same fighter since his hard fought 12 round draw against Badou Jack in 2017. DeGale hasn’t been the same fighter since that match. As such, Froch can’t use the Eubank Jr. fight as proof that he would have beaten DeGale back in 2015, because he was a different fighter back then compared to what he was last weekend.

How Froch and DeGale did against a common opponent in Andre Dirrell has to be measuring stick for who the better fighter was between them. All we know is DeGale did a heck of a lot better in beating Dirrell than Froch did. Froch’s win over Dirrell was HIGHLY controversial. Gilfoid had Dirrell beating Froch by an 8 rounds to 3 with 1 even score. The scoring for that fight was arguably atrocious, and the job that the referee did in trying to control the roughhouse tactics by Froch was horribly poor. Froch was was throwing Dirrell around the ring, and roughing him up without the referee stepping in to take points off or disqualify. Froch was getting totally embarrassed by Dirrell in front of his own boxing fans in the first six rounds. In the second half of the fight, Froch started roughing Dirrell up, and he literally got away with a boatload of fouls in that fight. Froch threw the Marquis of Queensbury rules out the window in the last six rounds. Poor Dirrell was out there on his down, being thrown around the ring by Froch like a rag-doll without the referee lifting a finger to get control over the fight. It was a cold, dreary night in Nottingham, and Dirrell found himself on the receiving end up what many boxing fans felt was a robbery of the first order.