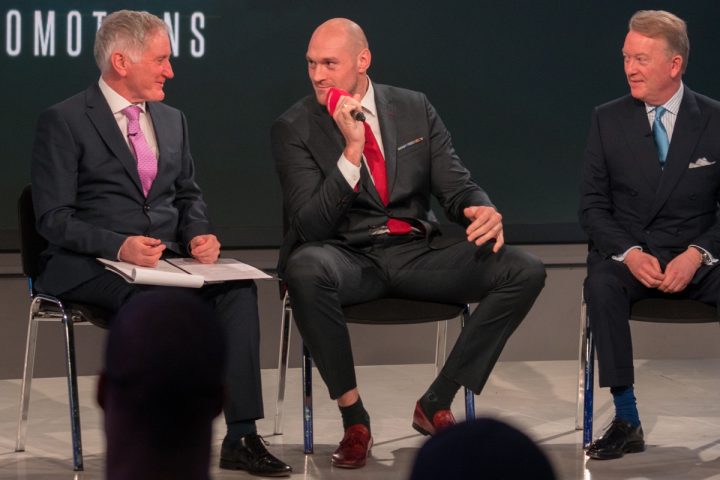 By Chris Williams: Top Rank promoter Bob Arum hasn’t given up on the idea of matching Tyson Fury against WBC heavy champion Deontay Wilder for later this year despite having pulled the plug on the idea of them facing each other on May 18. According to Arum, he hasn’t changed his plans on matching Fury (27-0-1, 19 KOs) in the fall.

Arum signed Fury to a multi-fight deal with his Top Rank Boxing promotion, and he decided to have him delay his rematch Deontay so that they could build the fight by facing other guys. This is the type of thing that Arum has done in the past with other fighters. In some cases, the fights never took place. One example of that was the Juan Manuel Lopez vs. Yuriorkis Gamboa fight that Arum wanted to let marinate. Another recent example is the Jose Ramirez vs. Regis Prograis fight.

“I’m assuring you that is the plan,” Arum said to ESPN.com. “The public didn’t really know who he was…We think Tyson Fury is a larger-than-life character, and we expect that ESPN, leading up to his fight in May or June…will have him on and let him do his thing and everyone will know Tyson Fury,” Arum said.

A lot of boxing fans think Arum isn’t going to make the Wilder vs. Fury fight for a long time to come. They see Arum using Fury’s lineal champion status as a chance to put him in with only in house fights against his Top Rank heavyweight one after another. If that turns out to be the case, then the U.S boxing fans might not see Wilder vs. Fury II until 2021 or 2022, depending on whether Arum wants to do rematches between Fury and his Top Rank stable fighters. Fury’s popularity, such as it is in the U.S, could drop even further rather than increase. The U.S hardcore boxing fans weren’t impressed with the way Fury fought Wilder last December, as they were bored by his fighting style. They also didn’t like the way Fury fought a boring fight against Wladimir Klitschko in 2015. Fury beat Wladimir, but it was a painfully boring fight to watch.

Arum calls the previous Wilder-Fury fight an “exciting draw”, but that’s not exactly what the fight was. It was pretty dull aside from the 9th and 12th rounds when Wilder caught up to Fury, and knocked him down. The rest of the fight was Fury fighting like a matador, trying not to get hit, and throwing a lot of weak jabs. Great television, it was not.

Fury’s interim fight in May or June is expected to be shown on ESPN+, the $4.99 subscription app. That’s a move that might not attract a lot of interest from the U.S boxing fans, who still don’t know who Fury is, and likely won’t care enough to want to see him fight. The opponent that Fury could be facing is either former heavyweight world title challenger Kubrat Pulev or Oscar Rivas. Those are two unknown guys as well, so it’s not going to help Fury attract interest from the casual boxing fans in the States. As such, the idea of having Fury fight in an interim match to help build the Wilder fight, if that’s really the true interest by Arum, will probably fail miserably. For the casual boxing fans that saw Fury’s recent 12 round draw against Deontay on December 1 last year, it wasn’t exciting stuff from the British fighter.

It’s a big risk on Top Rank’s part to have a vulnerable heavyweight like Fury fight an interim match unless it’s against someone that has no chance of beating him. If Arum is going to have Fury fight a bottom feeder or a journeyman level fighter in his interim bout in May or June, then it’s not going to attract interest from the casual boxing fans, and definitely not from the hardcore fans, who will know what the deal is.

If Arum wanted to increase Fury’s popularity in a hurry in the U.S, he should have let the rematch with Wilder take place on May 18, as planned. That fight would have for better or for worse, made a name for Fury. At least Wilder is well known in the U.S. Arum putting Fury in with the likes of Pulev, Rivas or Bryant Jennings is just a horrible waste of time. Those are not household names with the casual boxing fans, an the hardcore fans in the U.S don’t see those guys as great talents. If Arum wants to put Fury in with an opponent that will increase his popularity, he should match him up against southpaw Luis ‘King Kong’ Ortiz. That would be a fun fight to watch, as long as Fury didn’t run too much and make himself look like he’s afraid.

You can argue that the less the casual boxing fans know of Fury’ past, the better it’ll be for him and Top Rank. For them to find out about how Fury ballooned up to almost 400 pounds after beating Wladimir in 2015, it’s not good. The fans probably won’t like to hear that or about Fury’s depression issues. That kind of stuff is better off not being talked about. The fans like to hear positive stories about athletes, and not ones that show a dark past.

Arum’s decision to sign Fury, a guy that has less than a crowd-pleasing style of fighting, is a confusing one. Arum should have known from the past when he promoted Guillermo Rigondeaux that there are fighters that have fighting styles that the U.S boxing fans like to watch. Fury’s fighting style is very close to Rigondeaux’s, but not even nearly as exciting as him in this writer’s opinion. Rigondeaux has punching power, and is a great counter puncher. Fury is just a slapper, mover and clincher. He’s not someone that has a good chance of becoming a star in the U.S.

It’s a confusing move on Arum’s part to sign Fury to a long time contract. It would have been better for Arum to sign Fury to one-fight deal, and then stick him in with Wilder to watch what will likely be a knockout loss for the 6’9″ fighter. He was clearly knocked out by Wilder in the 12th round last December, but the referee gave a count while Fury was seemingly unconscious on the canvas. Nowadays, you don’t see a lot of referees giving counts to fighters that are knocked down the way Fury was in the 12th by Wilder. The referees usually stop the fight on the spot, and then the ringside doctor is ushered into the ring quickly. A rematch between Wilder and Fury will likely end quickly with Tyson being knocked out.