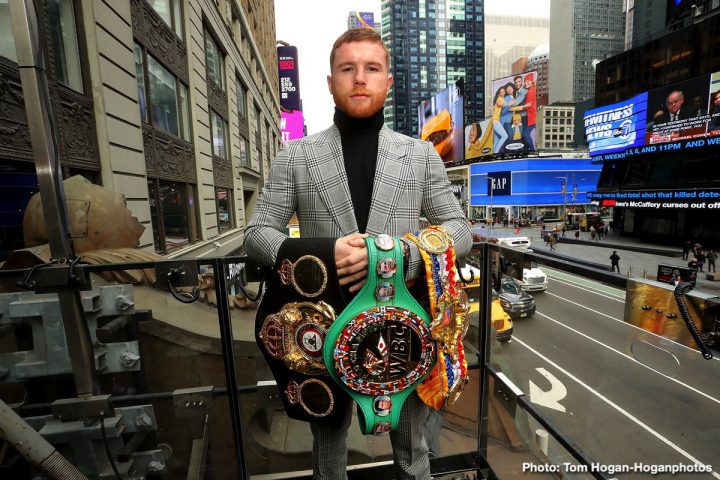 By Aragon Garcia: Saul Canelo Alvarez (51-1-2, 35 KOs) made it clear this week that the the 10 pound rehydration clause in the contract isn’t something that he asked for in his fight against IBF middleweight champion Daniel ‘Miracle Man’ Jacobs (35-2, 29 KOs) on May 4.

A lot of boxing fans had heard rumors that there’s a rehydration clause that Golden Boy Promotions had put into the contract to limit how much weight Jacobs could gain back, because he’s a huge guy that could fight at super middleweight or even light heavyweight. There’s talk from boxing fans that Jacobs rehydrated into the 190s for his fight with Gennady Golovkin in 2017. We don’t know what Jacobs weighed on the night of the fight with GGG. He didn’t take part in the IBF’s mandated secondary weigh-in on the day of the fight. Golovkin weighed in, but not Jacobs. There’s nothing stopping Jacobs from doing the same thing with Canelo if he doesn’t care about losing the IBF title.

“I like the challenges to give the fans the fights they’ve always wanted,”Canelo said. “This is a clause that was brought about by one of the organizations. In this case, the IBF, which he’s defending. This is not something I look into. My job is to prepare myself, to train myself, and don’t worry,” Canelo said.

It’s good that Canelo is letting the boxing fans know that he didn’t ask for a rehydration clause for the fight with Jacobs. Someone started the rumor that it was from Golden Boy’s side that they would have a 10 lb rehydration clause, but it took off like wildfire. If Jacobs doesn’t like the IBF rehydration rule, he doesn’t have to get up in the morning and weigh-in on the day of the fight. That’s up to him if he doesn’t want to defend his IBF belt. Canelo will likely take part in the secondary weigh-in, because he wants to win the IBF title, and then go after the WBO title. He can’t do that if he skips the IBF’s secondary weigh-in.

“It sounds like he’s got excuses already,” Canelo said when told that Jacobs is concerned with the judging at the T-Mobile Arena for the fight. “He’s already making an excuse of defeat. If that’s his mindset, then that’s a mindset that favors me. Just come and do your thing. If he comes and beats me, then everybody is going to see it,” Canelo said.

It sounds like Jacobs doesn’t confidence in himself. If Jacobs thinks he can do the job against Canelo, then he should trust himself and not worry about the judges. The only fighters that worry about judges ahead of time are ones that lack the self belief that they can do the job. Gennady Golovkin didn’t beat Canelo because he didn’t do what he had to for him to get the decision in their two fights. GGG wasn’t happy with the scoring for his two fights with Alvarez, but he should look in the mirror and take responsibility for not doing what he needed to for him to get the nod by the judges. It’s Golovkin and his trainer Abel Sanchez’s fault that they didn’t make the adjustments in those two fights that they needed to for them to beat Alvarez. It was obvious what Triple G needed to do for him to beat Canelo, but he didn’t do it. Golovkin failed because he stuck with his original game plan for both fights, and failed to make adjustments when things were going wrong.

“It’s normal. It’s part of the status where I’m at,” Canelo said in commenting on the perception that he’s given favoritism by judges when it comes to the scoring of his fights. “When somebody has the success, the popularity, it comes with the territory. There’s always going to be critics. There’s always going to be somebody saying something. You just have to deal with it,” Canelo said.

The scoring for Canelo’s fights aren’t slanted in his favor. The judges did a great job in both of his fights with Golovkin. If anything, the judges seemed to bend over backwards to give GGG rounds last September. This writer scored the rematch for Canelo by a 11 rounds to 1 score over Golovkin. The judges scored it close in giving Canelo a 12 round majority decision by the scores 115-113, 115-113 for Canelo, 114-114. Jacobs just needs to worry about his job on the night of the fight, and not try and be concerned about the judges. If Jacobs loses the fight, it’s because he deserved to lose. The judges are there for a reason. Jacobs needs to let them do their job.