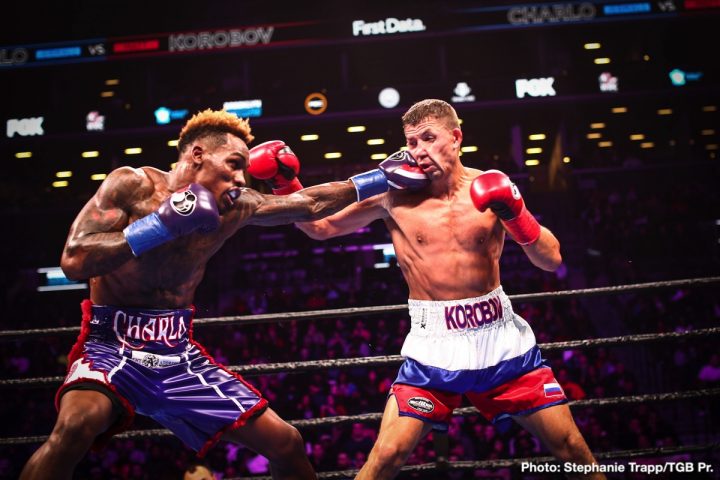 By Dan Ambrose: Interim WBC middleweight champion Jermall Charlo (28-0, 21 KOs) looked unimpressive in beating 35-year-old 2008 Russian Olympian Matt Korobov (28-2, 14 KOs) by a controversial 12 round unanimous decision on Saturday night on PBC on FOX at the Barclays Center in Brooklyn, New York. The scores were out of whack from the fight that took place tonight.

Korobov couldn’t miss with his left. Charlo was not well trained enough to block the incoming left hands from Korobov, and that’s not surprising, because he only had less than a week to prepare for him. Charlo appeared to win 4 rounds at the most. At the least, he fought well enough to win three. There were four close rounds where it could have gone either way. Those were rounds where Kovalev out-landed Charlo by a wide margin, but he was hit hard a few times. It appears that the judges gave those rounds to Charlo.

Charlo was eating straight left hands from Korobov in the first six rounds. Those were all head-snapping shots, and wasn’t able to do anything to come close to winning any of those rounds. Going into the 7th, it appeared that Korobov was head by six rounds, but the judges saw the fight differently, especially the judge that scored the fight 11 rounds to 1 for Charlo.

In the championship rounds, Korobov fade, and this enabled Charlo to come back and take those rounds. In the 12th, Korobov’s corner made the mistake of telling him to come slugging. He hadn’t fought like that during the first 11 rounds, and it left him open for some big shots from Charlo, who hurt him. Charlo failed to step on the canvas to get the stoppage though. He might have been a little worn from all the left hands he’d been the entire fight. Charlo had never been hit as much as he was tonight during his career. He took a massive amount of hard straight lefts from Korobov. To Charlo’s credit, he took them well, but he’s not going to go far in his career eating those kinds of shots.

The scoring for the fight was disturbing, especially the judge that scored it 11 rounds to 1 in Charlo’s favor. That was score was every bit as bad as the the judge that scored the first Saul Canelo Alvarez vs. Gennady golovkin fight 10 rounds to 2 in Canelo’s favor in 2017. Just how a judge could see the Charlo vs. Korobov fight as one that Jermall won by a 119-108 score is hard to understand. It’s bad for boxing, and it makes fans wonder whether the judges are competent.

With the victory tonight, Charlo retains his interim World Boxing Council middleweight title, and he stays in line as the mandatory challenger to WBC middleweight champion Saul Canelo Alvarez. The WBC president Mauricio Sulaiman said this week that they’re going to be ordering Charlo to face #1 WBC contender Gennady Golovkin in a WBC final eliminator. The winner of that fight will be Canelo’s mandatory challenger. Charlo is already the mandatory for Cnaelo, but the WBC is going to make him fight another eliminator. GGG hasn’t said whether he’ll go along with the WBC’s wishes to take on Charlo tonight. But if Golovkin saw how flawed Charlo looked tonight against Korobov, he might want to think hard before he makes the decision. However, with the kind of scoring that we saw tonight, Golovkin might not want to subject himself to being put in the same position where he could wind up losing a controversial decision to a fighter that is seen as the future of boxing at middleweight like Charlo.

“I had fun in there with an opponent like that,” Charlo said after the fight. “I got the win and that’s the main thing. I still feel I’m the best in the world. I just need to prove it to the rest of the world.”

Charlo sure didn’t look anywhere close to the best fighter in the world tonight. He didn’t even look like the third best. The way that Charlo was fumbling around in there, he would have been lucky to get past someone like Demetrius Andrade or Rob Brant. Those guys have to be seen as being above Charlo after tonight. The best fighters at 160 are obviously #1 Saul Canelo Alvarez and #2 Gennady Golovkin. IBF champion Daniel Jacobs now will likely be seen as #3, and then the #4 and #5 will come down to Andrade and Brant. Charlo is too raw right now for him to be seen as being in the same class as the top guys.

It would be a good idea for Charlo to give Korobov a rematch to help deal with the controversy surrounding the fight. Charlo doesn’t need to, but he should do it. Korobov looked like the better fighter tonight. If Charlo is fine with walking away with this victory and feeling good about himslf, then that’s up to him. Charlo likely lost a lot of boxing fans tonight with the way he fought.

Charlo’s twin brother former WBC junior middleweight champion Jermell Charlo also looked bad tonight in losing a 12 round unanimous decision to Tony Harrison in the co-feature bout on the card. You can argue that the judges got the decision right in that fight at least. Both Charlo brothers looked horrible, and you have wonder their future longevity in the sport as top fighters. They clearly both should have lost tonight, not just Jermell.

If Charlo cant even beat a ring rusty fighter like 35-year-old Korobov without controversy, then what does say about him? What makes Charlo’s victory over Korobov look all the worse is the Russian fighter competes at light heavyweight, but he was coming down to 168 to fight on the undercard of Charlo’s card. When Charlo’s original opponent Willie Monroe Jr. was taken off the card a week ago after he tested positive for a banned performance enhancing substance, Korobov was asked if he could step in as the replacement to face Jermall. To his credit, Korobov readily agreed to take the fight, but he was still forced to lose an extra eight pounds to get down from 168 to 160 to fight Charlo. Korobov did all that, and still fought well enough to deserve the win in the eyes of a lot of boxing fans that watched the fight tonight.

The 11-1 score by the judge tonight was just plain awful, but the 116-112 scores also made no sense. Charlo should have lost the fight. If all the close rounds went to Charlo, then the fight should have been scored a draw at 114-114, but that would have been a case all those rounds going to Jermall.

WBC middleweight champion Saul Alvarez might want to get his mandatory out of the way by fighting Charlo next. Canelo looks so much better than what we saw from Charlo tonight. It would be a mismatch if the two of them fought each other right now. Charlo needs to go back to the drawing board and start from the ground up to fix his game before he faces Canelo. Fighting Korobov again would help Charlo’s game, because he’s got a lot to learn about boxing.

Charlo needs more experience before he faces a fighter with the boxing skills of Canelo, and tonight was a fail for for him as far as him showing that he can hang with top fighters. It’s doubtful that Charlo will take a risk in facing Korobov again. Even if Charlo wanted to, his management at Premier Boxing Champions likely will want him to move forward with his career to either face GGG next, if he agrees to take the fight, or whoever the wBC picks for him to face in a final eliminator to get the mandatory title shot against Canelo. 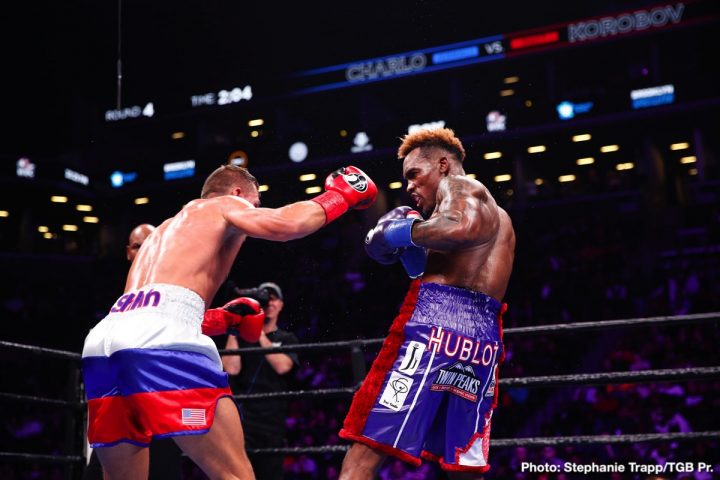 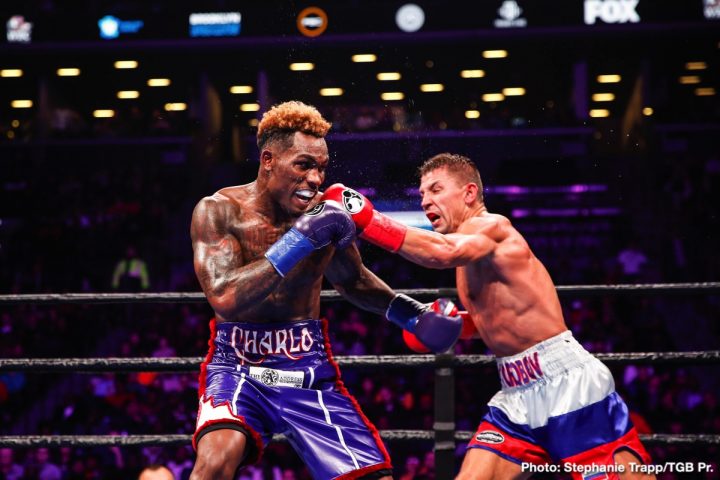 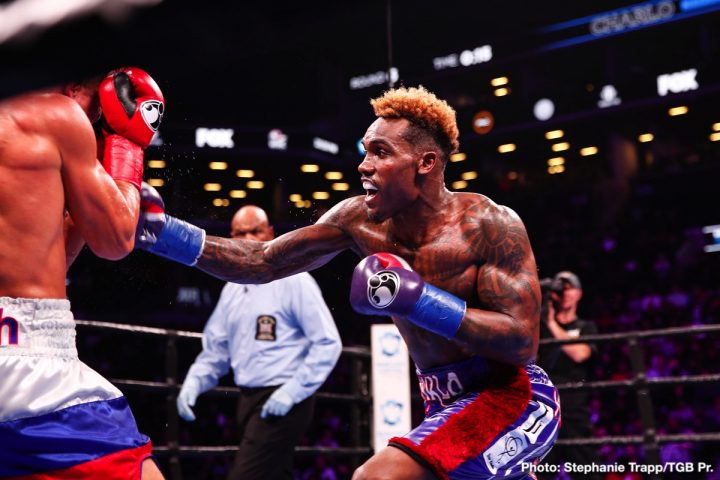 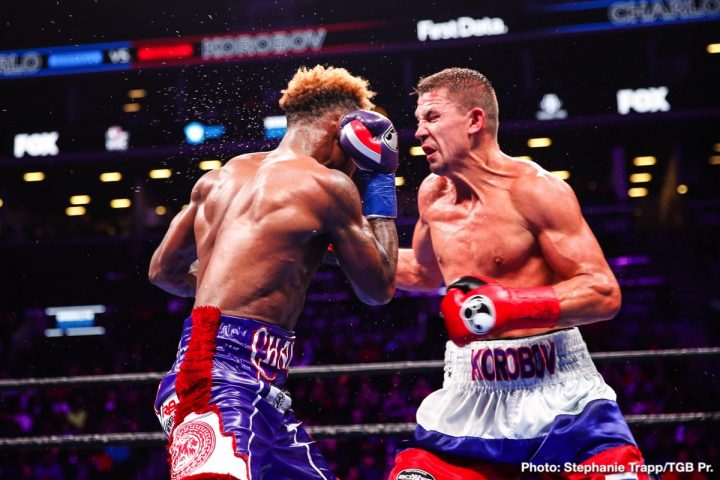 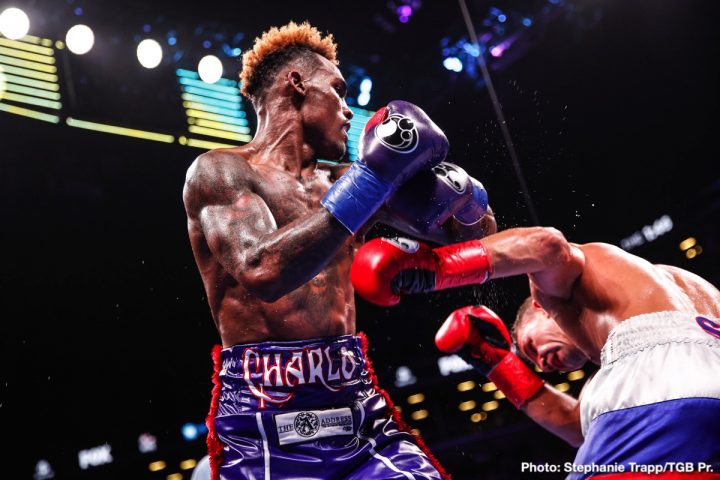 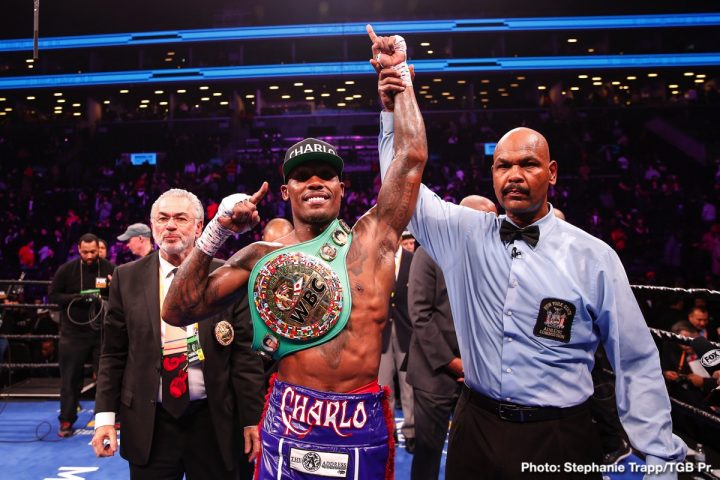 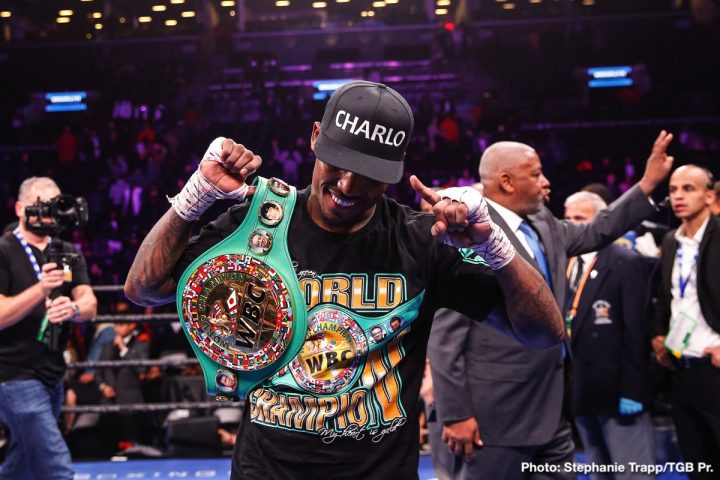 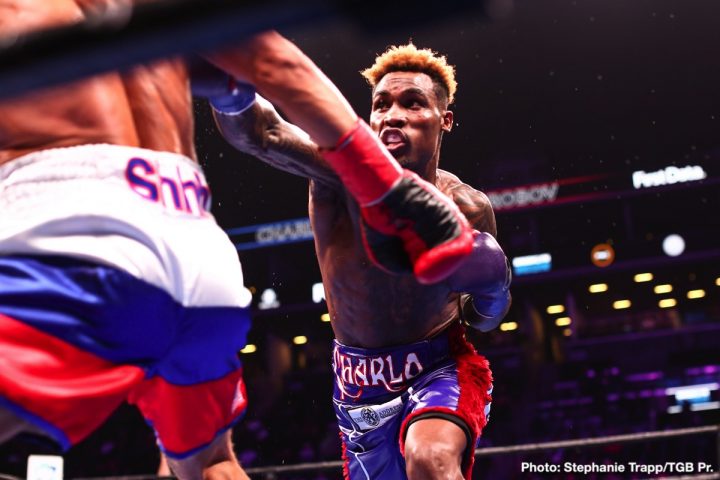 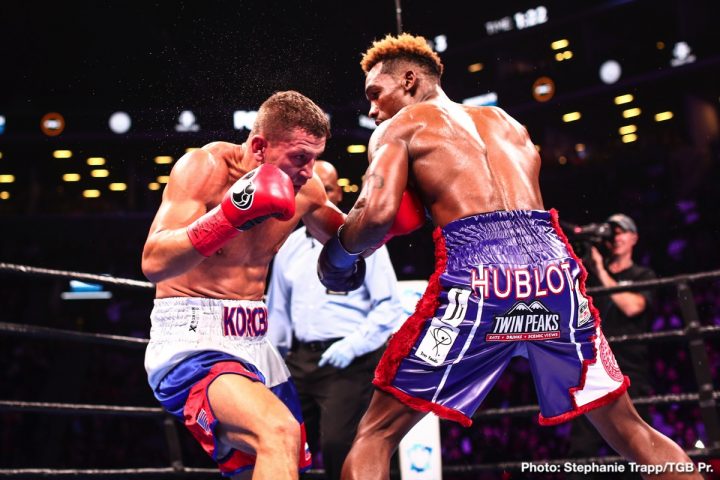 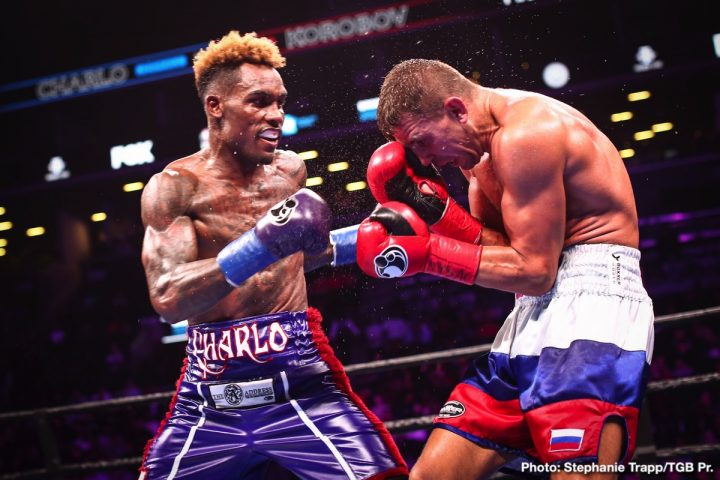 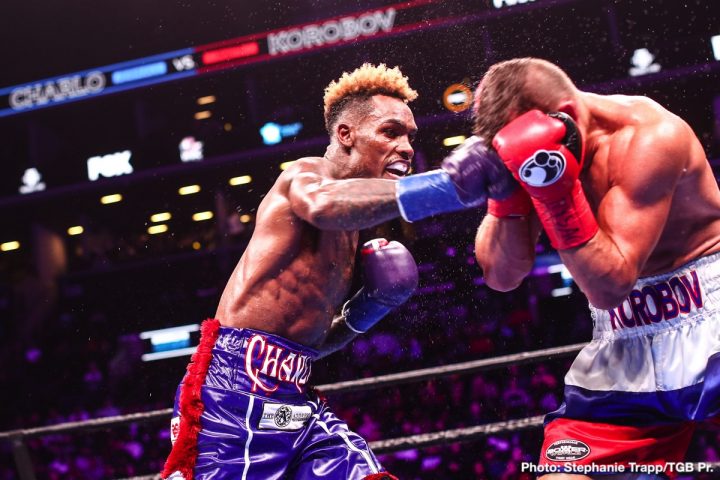 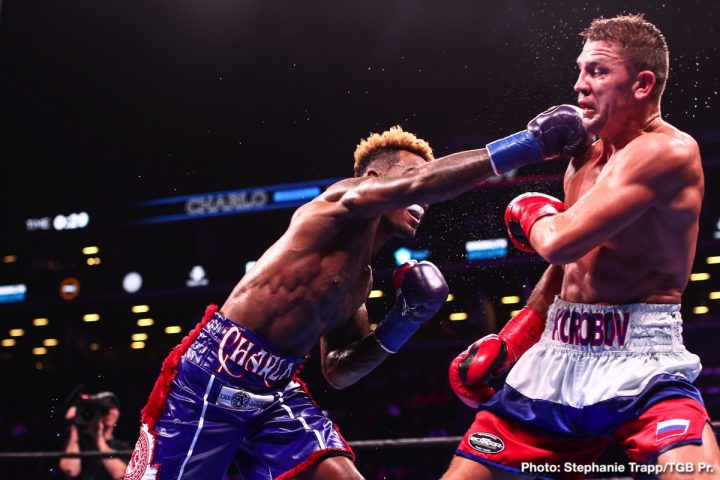 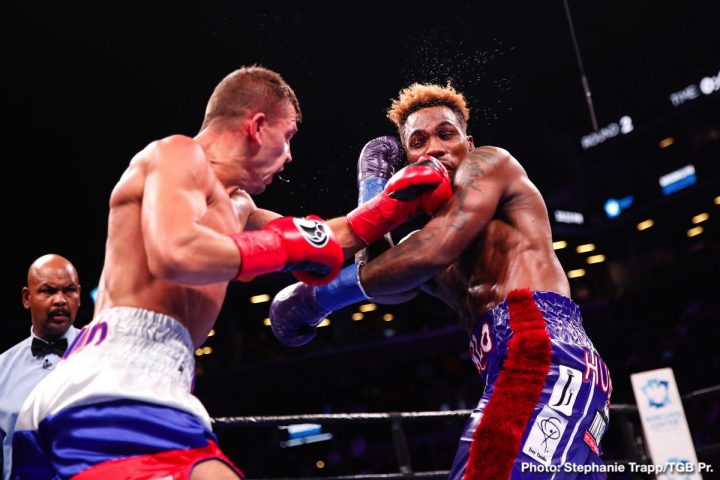 PHOTOS: Charlo vs Korobov; Harrison vs Charlo; Breazeale vs Negron »