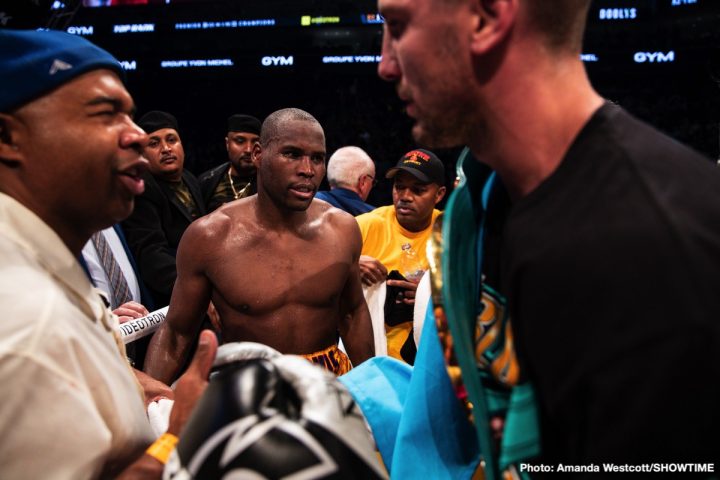 By Jim Dower: Adonis Stevenson’s promoter Yvon Michel says his fighter’s condition has is now gone from critical to stable following his 11th round knockout loss to Oleksander Gvozdyk last Saturday night in their title fight at the Centre Videotron, Quebec City.

Stevenson (29-2, 24 KOs) lost his World Boxing Council light heavyweight title when he was knocked out in a brutal fashion in the 11th round by his mandatory challenger Gvozdyk (16-0, 13 KOs). Stevenson, who was tired and hurt in the 11th, took eight consecutive shots from Gvozdyk in the round before collapsing on the canvas. Referee Michael Alexander hurriedly waived off the fight, but the damage had already been done. After the fight was stopped, Stevenson briefly seemed to be okay after getting back to his feet, but condition quickly worsened and he was taken to hospital in an ambulance where he was in critical condition.

Here’s the news update from Yvon Michel on Stevenson’s condition:

“Update on Adonis Adonis Superman: The state of Adonis has gone from critical towards stable from yesterday to today which is a relatively good news. He is in controlled sedation to facilitate his recuperation. His family, his wife Simone and Groupe Yvon Michel would like to thank the many people who have taken the time to send comforting messages. New information will be published has we get it. No other comments will be made until then.”

Stevenson had come into the fight with the 31-year-old Gvozdyk as the underdog after having fought to a 12 round draw in his previous match against Badou Jack on May 19 in Toronto. Stevenson had been the longest reigning champion in boxing having held his WBC 175 lb title since 2013 after knocking out then champion Chad Dawson in the 1st round. Gvozdyk was Stevenson’s first mandatory challenger for to have faced since his win over Tony Bellew in November 2013. Since that fight, Stevenson had taken seven consecutive voluntary defenses over a span of five years. Stevenson had never been a particular busy champion, as one would guess by the seven fights in five years. He’d been criticized for fighting a lot of weak opposition in what some boxing fans characterized as title-milking fights against the likes of Tommy Karpency, Thomas Williams Jr., Andrzej Fonfara x 2, Sakio Bika and Dmitry Sukhotskiy. Badou Jack was the easily the toughest opponent that Stevenson had faced since his contest against Tony Bellew in 2013.

Stevenson had said this week that he wanted to fight the other champions at light heavyweight in unification fights once he got past 2012 Olympian Gvozdyk. Now that’s obviously not going to happen. Stevenson’s career could be over depending on the severity of his injuries and/or his desire to continue on if he’s given a clean bill of health by his doctors. It’s still too early to speculate whether Stevenson’s career is over with.

Stevenson was ahead of Gvozdyk on two of the judges’ scorecards and even on the third at the time the contest was waived off in the 11th round. Stevenson, 41, had made 10 defenses of his WBC title.